It seems that as great as Blog Wars was it may have broken most of my gaming crew. Unless it's a general malaise, or that time of year we all seem to be 40k'd out. Ben and Otty did nip back to the NW Gaming Centre but came away with X-Wing for variety so Ben suggested a game. Unfortunately PeteB [who briefly owned the game] couldn't make it due to coming off a night shift so I had to officiate with my 'expertise' having watched one game and also Wil Wheaton on Tabletop.
So I'd printed off a mat for Ben and I took on the role as plucky young rebel Luke Skywalker, y'know the dude that promised Yoda he'd stick to his Jedi training and promptly ran off after a few days of jungle free running to 'save his friends'. Ben meanwhile fired up the Tie Fighters and we stumbled through our first game. 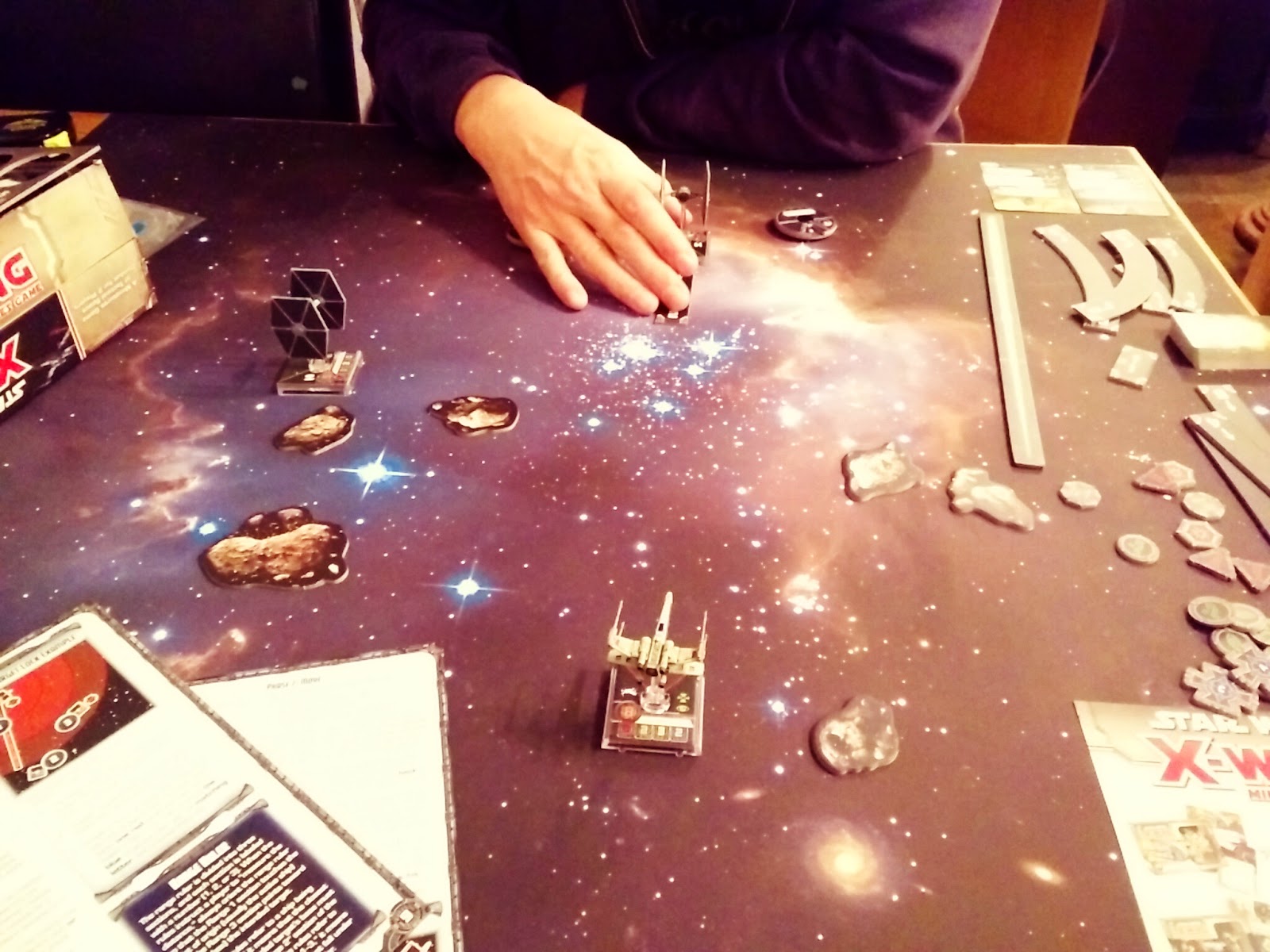 As you can see we didn't quite grasp the 'trying to predict where your opponent might go' as I ended up way over on the left and Ben clearly was playing 40k and going for Linebreaker! the end result was the death of Skywalker and we swapped sides. 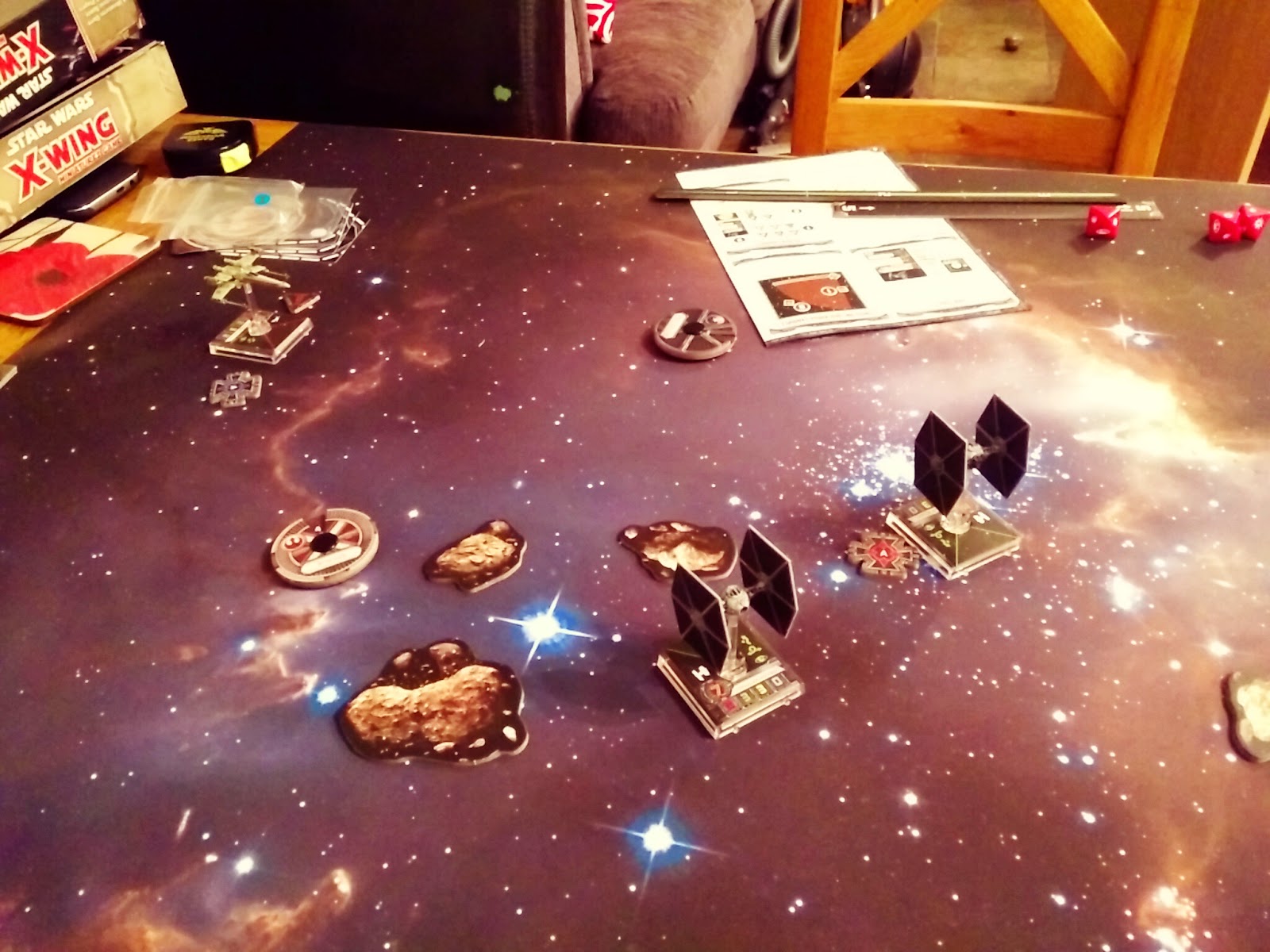 The second game was much quicker, in part due to a complete tactical error on my part in that I overestimated the distanf for a 4K turn and insetad of appearing behind the Rebel scum promptly turned tail right in front of him and paid the price. The second Tie Fighter followed in quick succession. Overall Ben was really impressed and despite his opinion that it's a 'cheap' pick up game he's already ordered some more 'planes'. 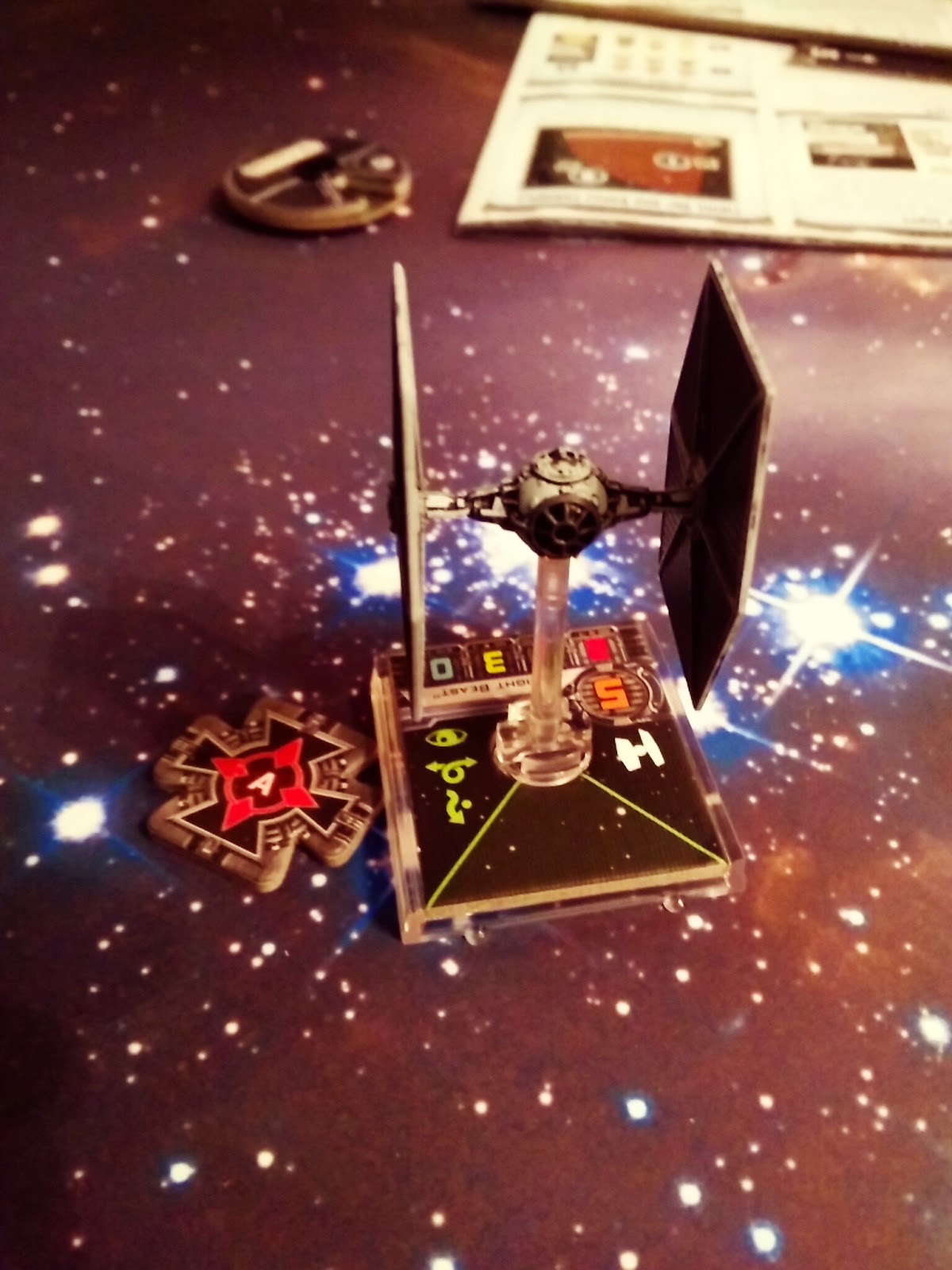 On to the main even, Wednesday Night Blood Bowl


We had the newly complete Elves Vs Skaven, similar stats but with teh Skaven having an extra m move [in 2nd Edition rules]. Ben went Elves and I had the ratmen again. 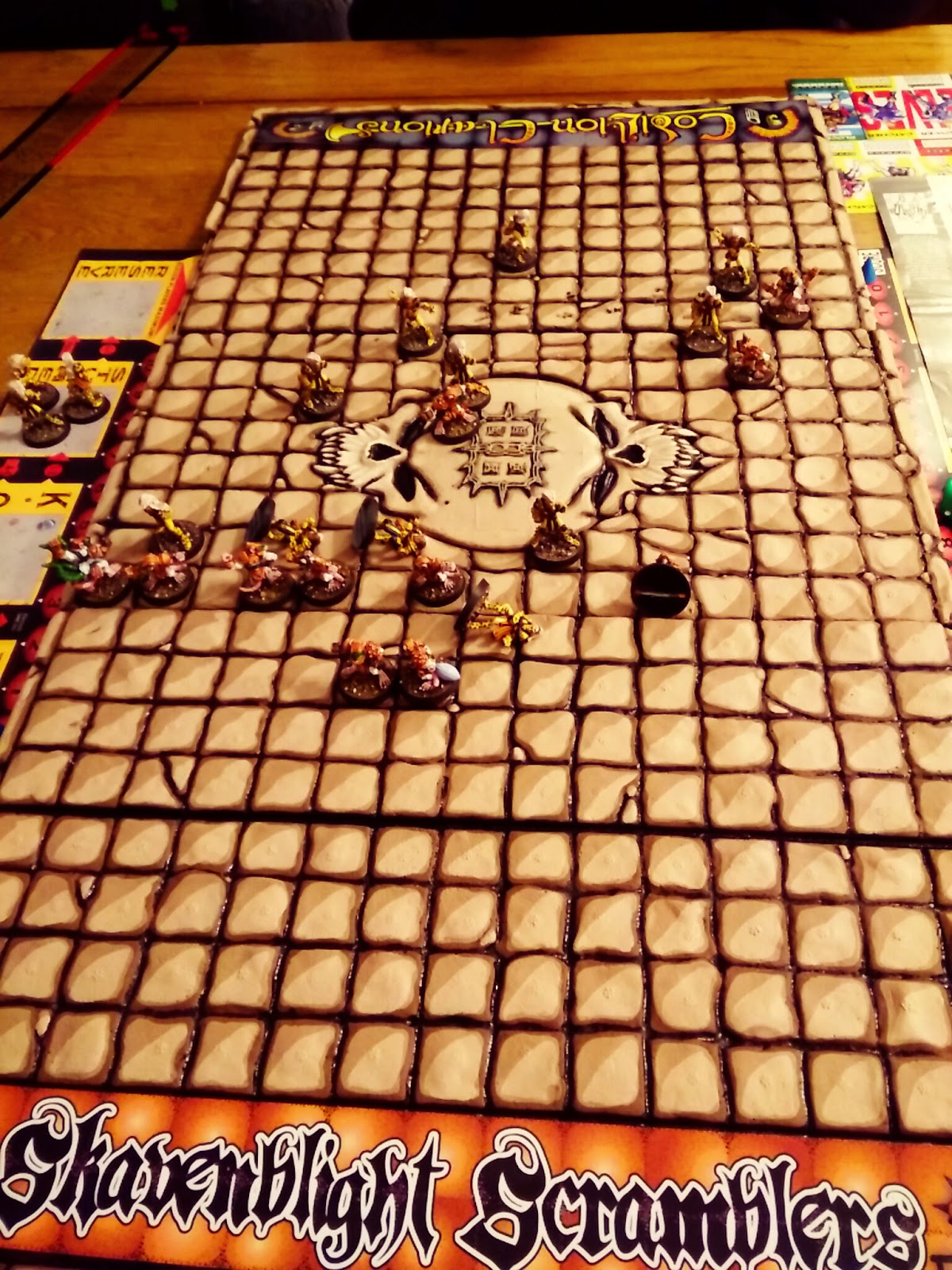 Ben started with the ball but threw to his catcher quite aerly allowing me to block them and eventually recover the ball. 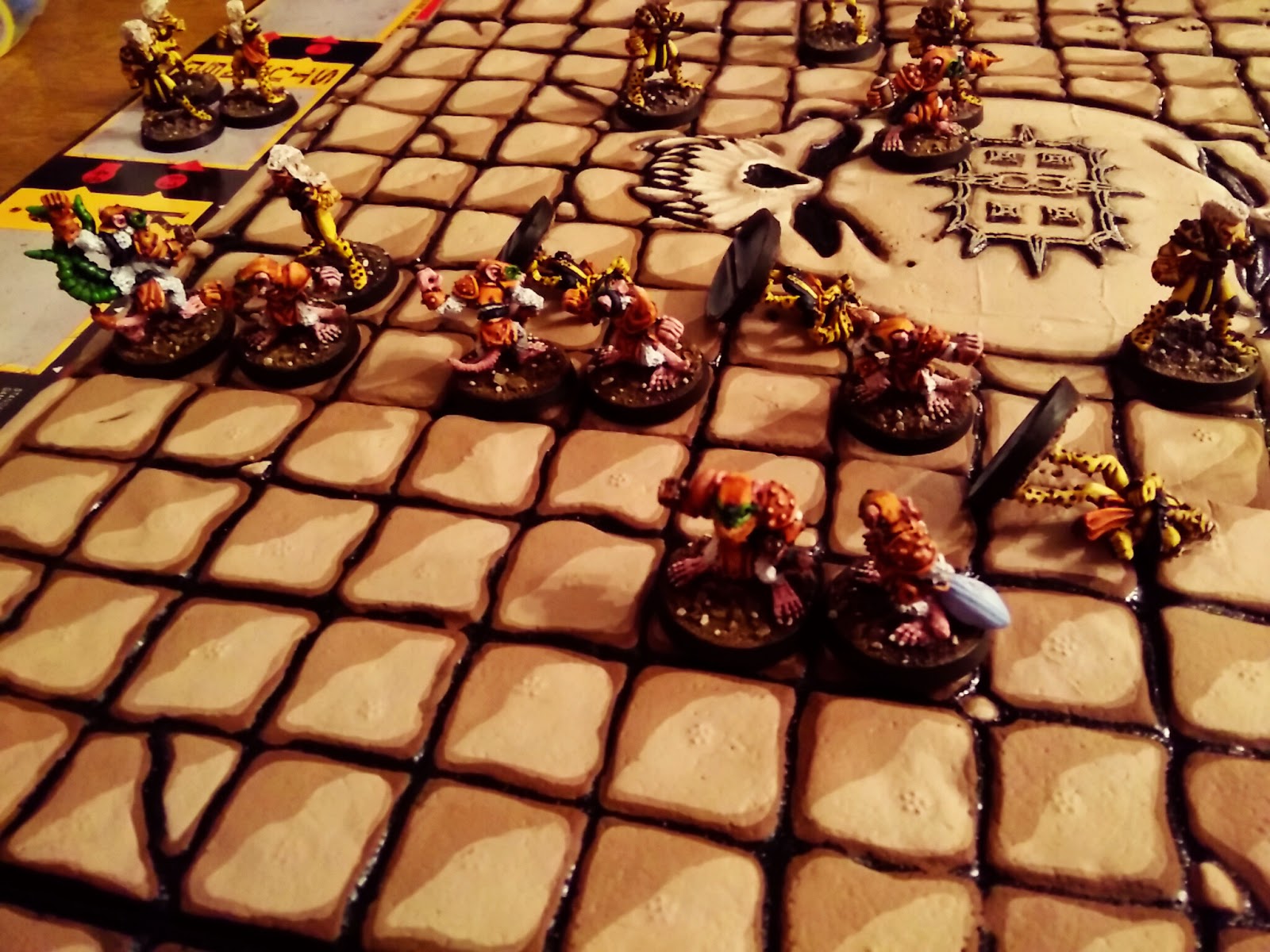 Delaying tactics ensued as I pushed a couple of models forward to capitalise on my having secured the ball. 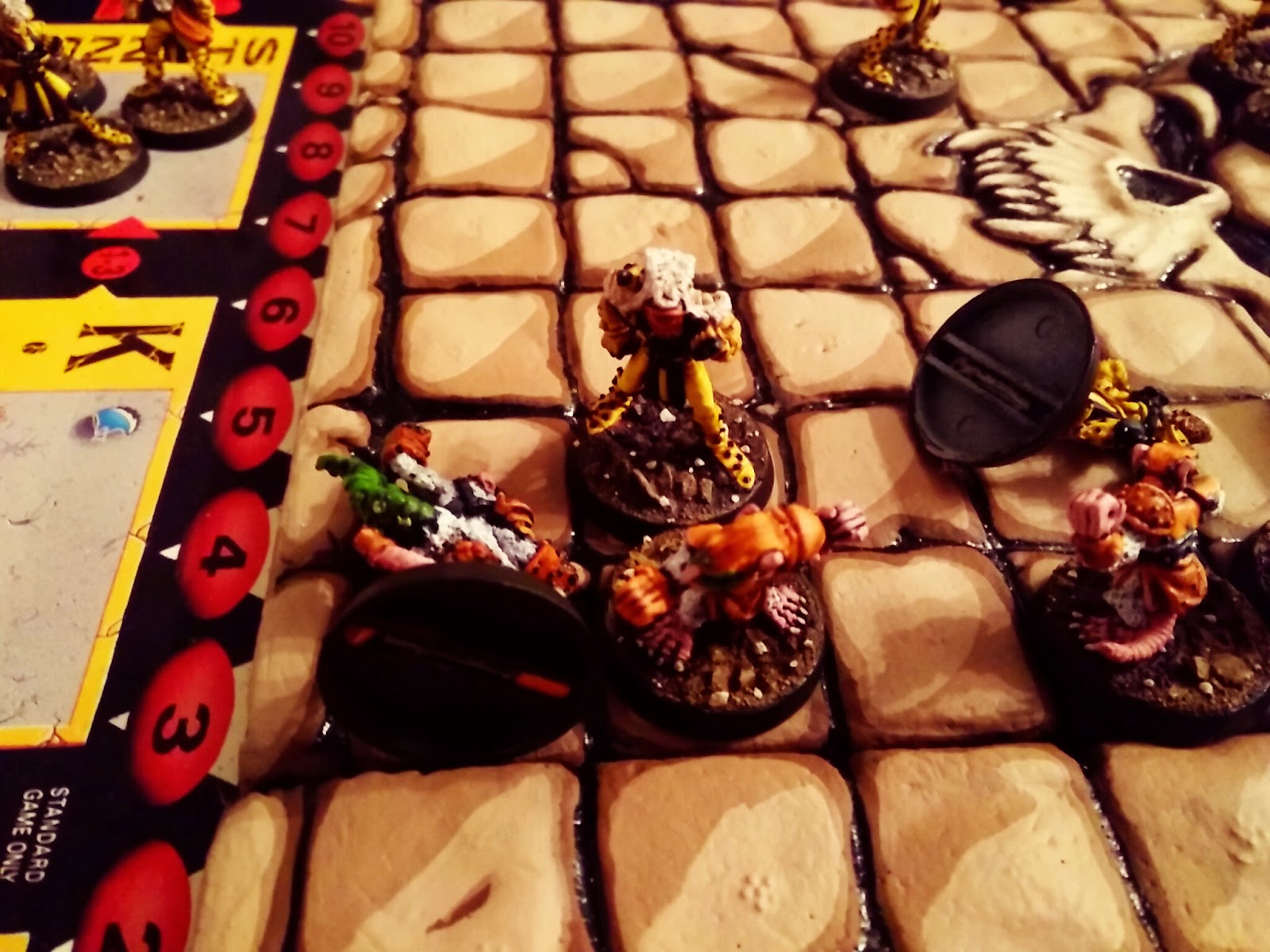 With quite a few elves occupying the Stunned and KO'd area of the dug out I was eventually able to score a touchdown. 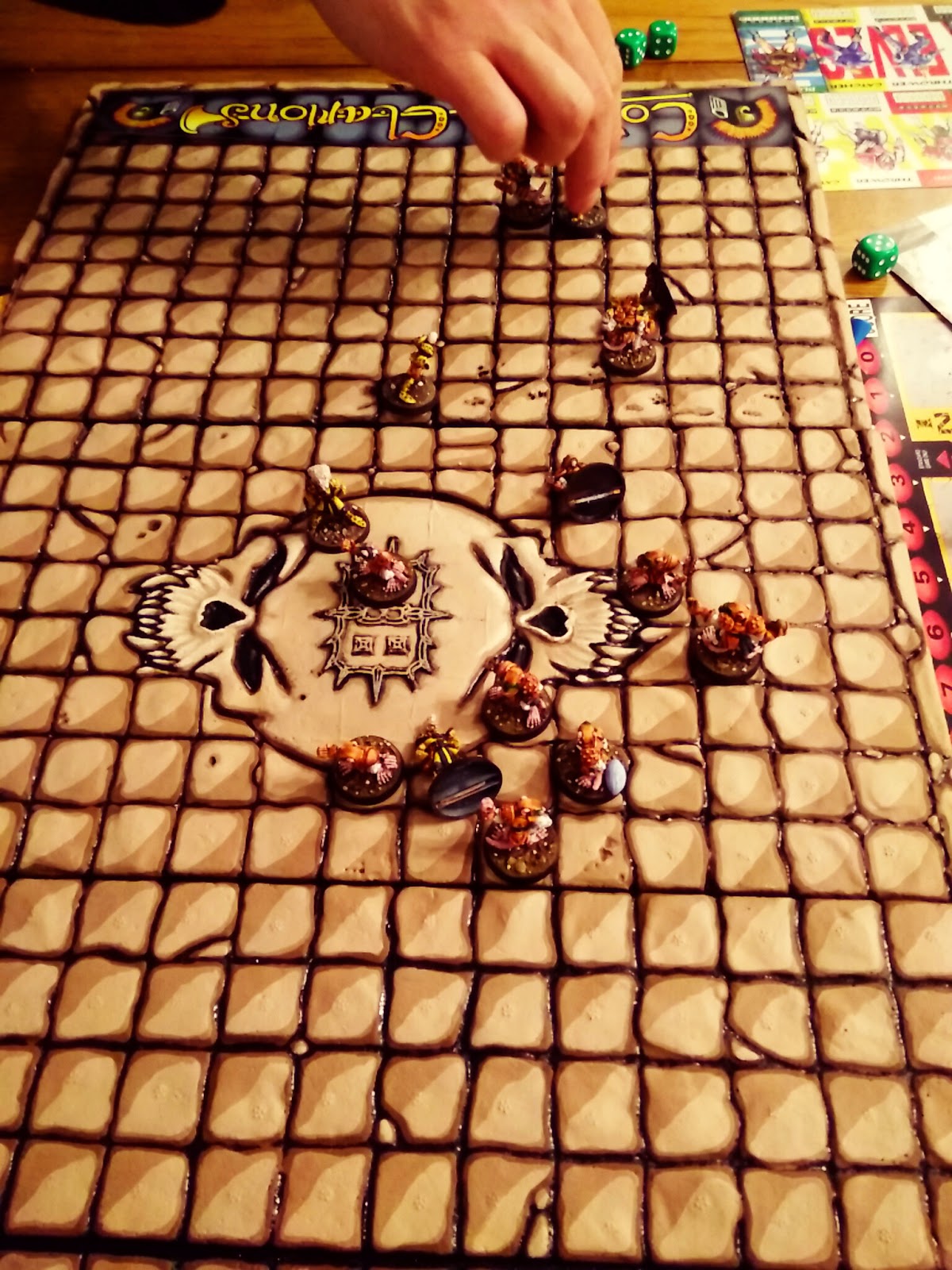 After the reset Ben started with the ball again I was able to recover it. 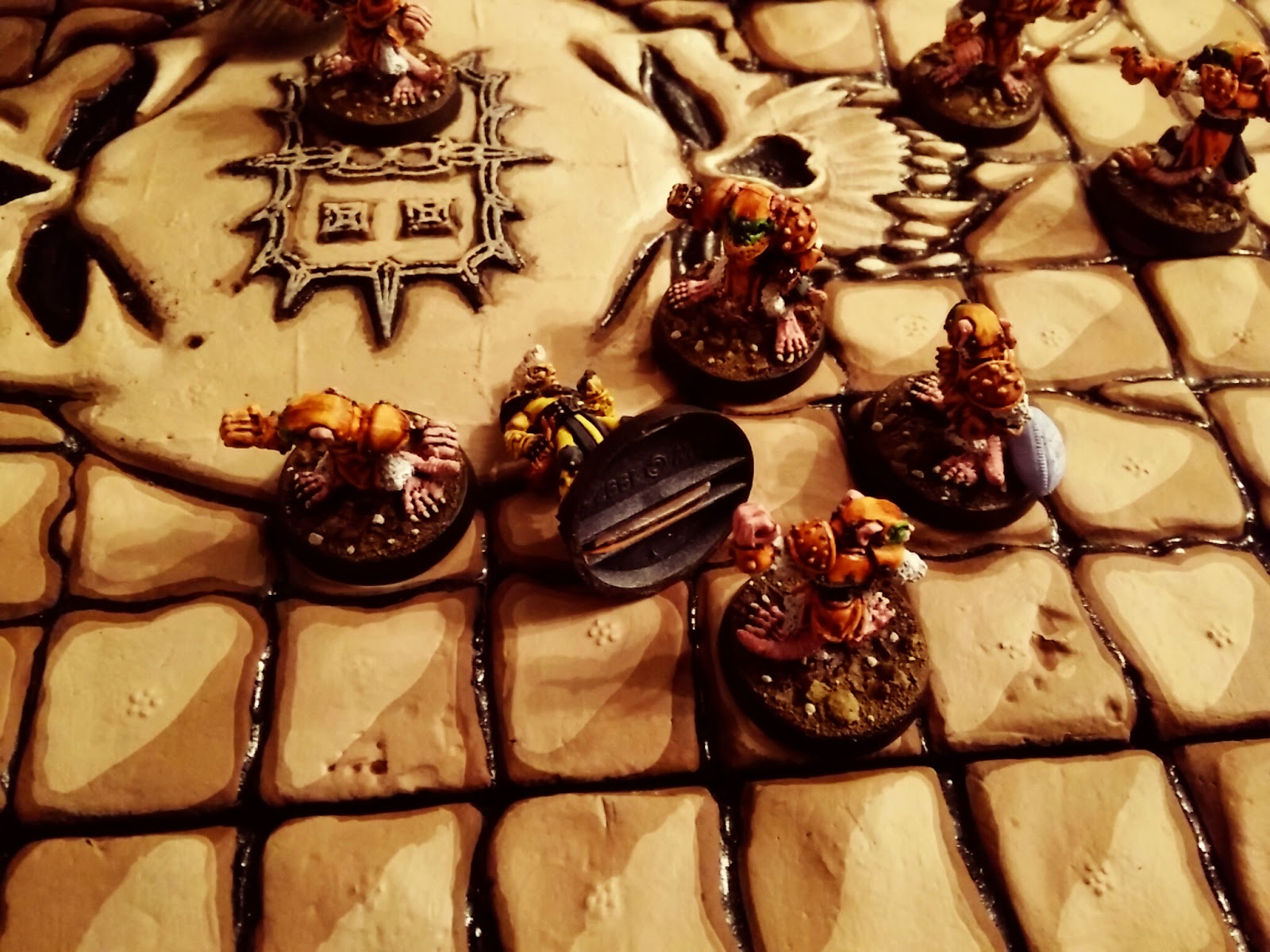 I would eventually lose the ball for Ben to snatch a draw and we called it quits for the evening. 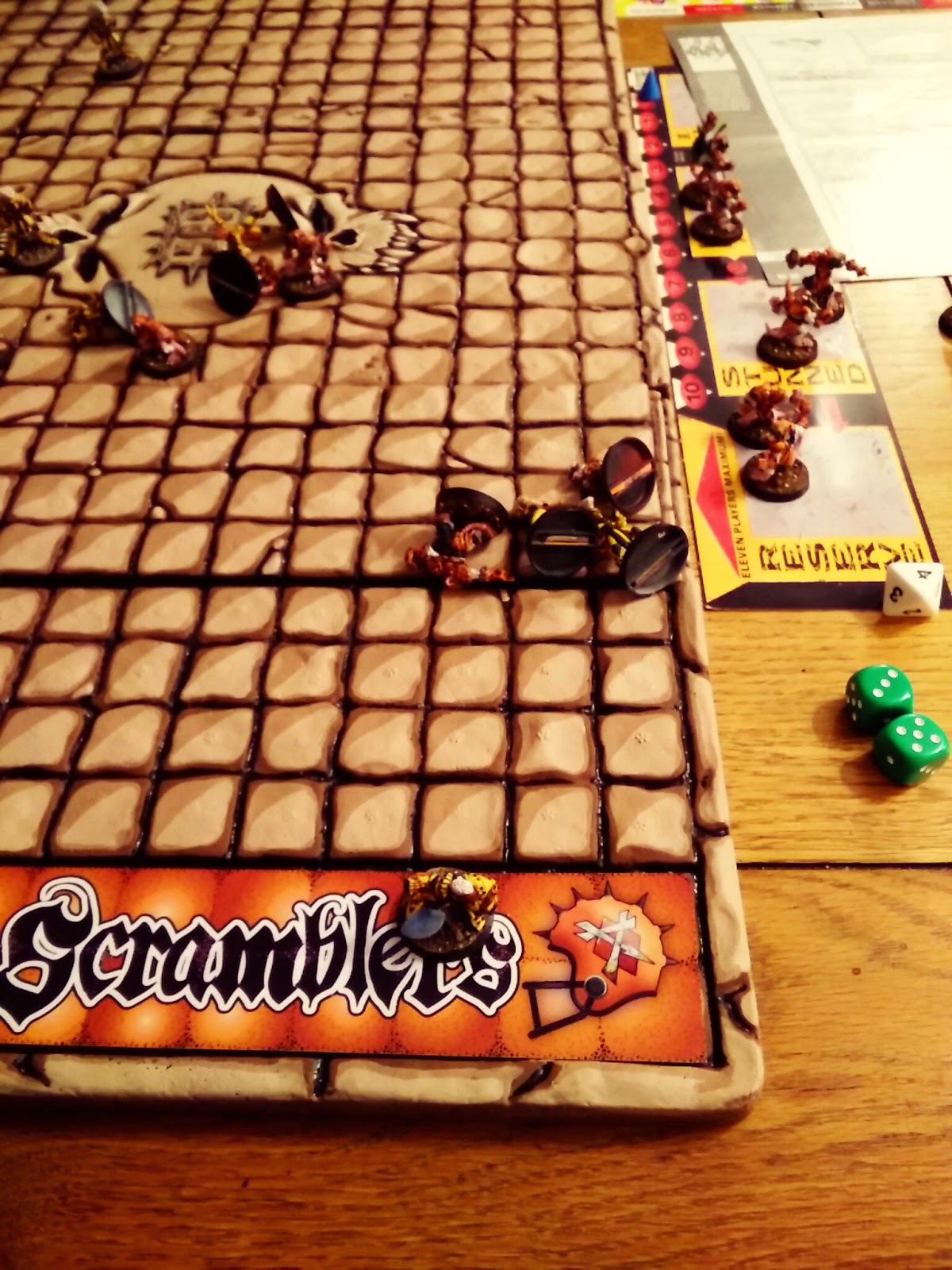 I think I'm correct in thinking Ben had a lot more fun playing X-Wing, when your dug out looks like this there can be quite a pessimistic opinion formed. When I played PeteB with the same team the result was pretty similar but we had to laugh at the absurdity of it. I’m not so sure Ben saw the funny side this time. 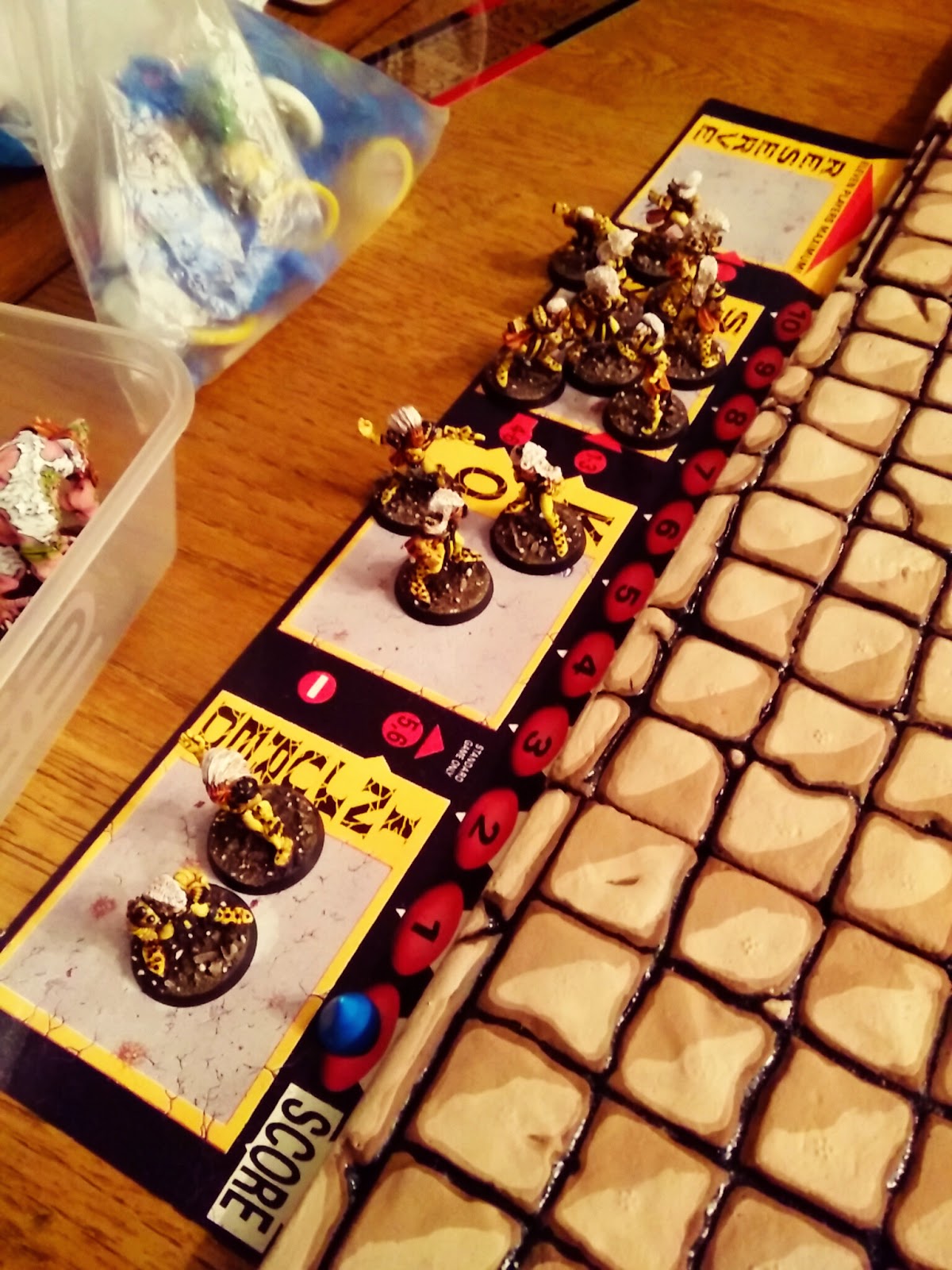 Still it's something different and Ben may put together a team so we'll see how it plays out sports fans.