Once again the 'unique way of posting' in this blog, prepping well in advance otherwise I'd never post anything means the other day I went to Warhammer World - barring natural disaster and given the Mayan 2012 prophesies who knows?! The point being my son was attempting to get his 1,000pts of eldar ready to compete with although I'm pretty sure as I write this he'll not meet the deadline. He did try a bit but I think there are just too many distractions for a 10 year old nowadays that spending more than 30 minutes painting﻿ is just tedious.

However, one thing he did progress with was his 'Diving Eagles'. With full disclosure I did paint one of them, as a pattern for him to follow and it's this one below we'll begin with. As you can see the Devlan Mud and Badab Black washes have really toned down the Red Oxide Primer from the previous pictures in the link above. 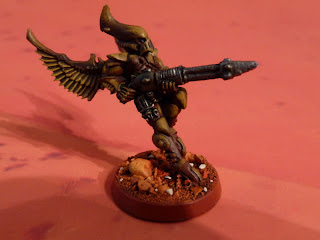 The Devlan Mud also makes a nice patina effect on the gun but thanks to the vagaries of Finecast you can see the barrels aren't straight BOO! I also did the bases for all of the models. 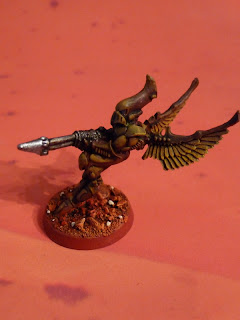 I was particularly pleased at the way the highlights on the front of the helm morphed as I did them so it wasn't a clean blend but instead I started making little 'feather-like' strokes. OK this isn't anything different really from the Chitin marks on the Tyranids but for some reason they do look, in my eyes, like a completely different texture. 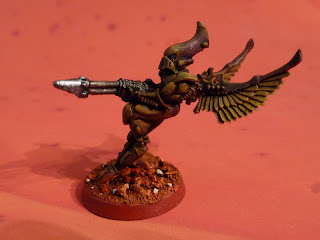 The remaining 5 miniatures were all washed in Devlan Mud and Badab Black and I did the bases. 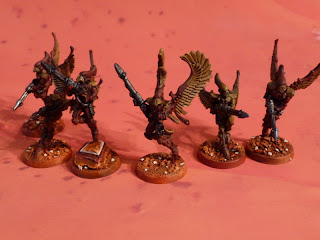 I may have gon a little too far on this individual but I wanted to try that layered stone effect you see on eroded rock formations in monument valley. I think there is perhaps too much contrast here but it's a first try and a little bit different. 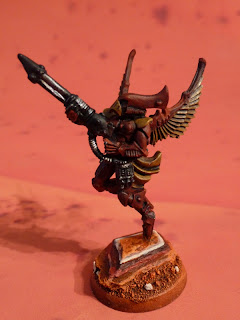 And a view from the side. 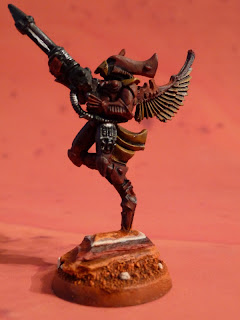