Here's how Brother Cask is shaping up. Some of the metals have been 'verdi-gris'd', which is cool. I've managed to make a dirty Bonewhite so it's not the same as the Deathwing for parchments and the sculpt on the front of the sarcophagus. The Ferron Red is in place but due to it's shiny nature is 'telling me' not to add any highlights as it will just go orange. Equally the Dark Angels green is telling me the same. I'm thinking messing about with it now will just make it stand out and I don't want that neon feel for my Dark Angels. 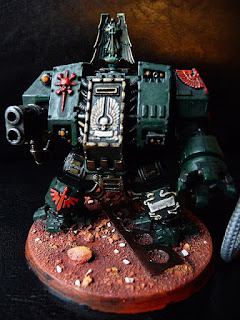 Side view, and I love the parchment and the seal actually looks like wax, hence my reluctance to add anything else to that. Also the base has been done [uncharacteristically early], but not the Mechrite Red edge as there is still a bit to paint and the edge will be handled a lot which won't help the finish. 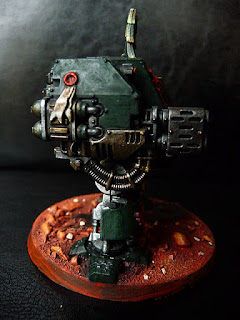 The back view, where the verdi-gris comes into it's own. A mix of the bronze/brass effects I like with a touch of weathering, so I may be able to add it to the Tactical squad afterall, so long as I am subtle about it. Still might make the skull on the back 'dirty white'... 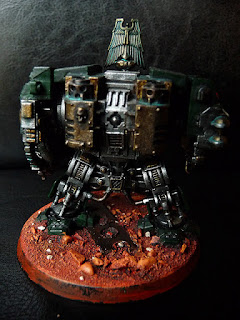 The other side and the red is just a bit too shiny here, I need to take it down a bit, Devlan Mud anyone? 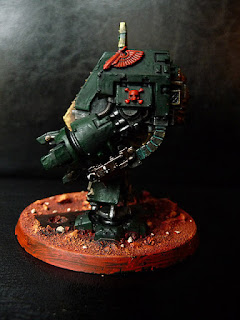 Couple more shots, with better lighting and close-ups. I'm pretty sure this is not far off complete but I know I haven't actually done a lot of painting on the green and the finish is a bit lumpy which I'm sure I could make it work for a bit of battle damage. However, with all the metals and effects so far I'm convinced the plain green makes those bits work better and if I add to them the whole model will be just too busy. So another model 'on hold' for the time being while I make more terrain. 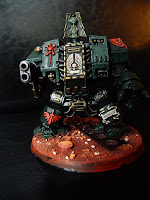 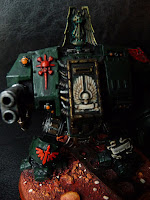