So right when I was coming up on the anniversary of the blog and feeling the least motivated to actually do any painting I suddenly had a flurry of activity only for it to blow as I once again reached a 'painters block'. I did all the antique bronze and then applied my verdigris washes to the Deathwing and I think they came out awesome, but they now don't fit the look of the rest of the army, in particular the Tactical squad. Anyway these pics show how the verdigris looks, under natural light and I even attempted some glow effects on the eye lenses. 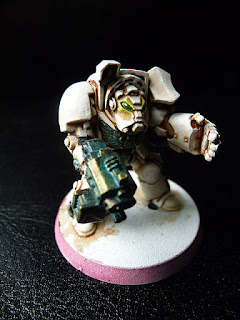 I'm not entirely convinced with my efforts on the Crux Terminatus. The Ferron Proxima stone effect doesn't look like stone, it's particularly reminiscent of my old Empire army figures, not sure how to tone it down or whether some drybrushing might make it more dusty, therefore more stone-like... 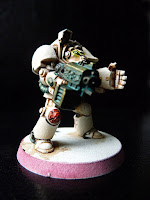 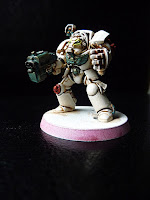 The other issue is battle damage, which I want to do, but it's going to be tough as I don't want to put silver in any scratches. I want perhaps black to show through as the fluff suggests that underneath all the Bonewhite there's black but what's underneath that? Again a decision that is choking any further progress. 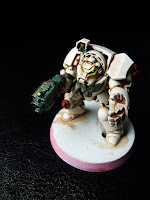 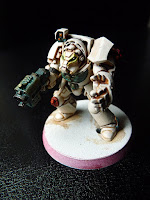 And here lies the other side of the equation. The antique brass here is great, I don't want to touch it but it looks odd next to the Deathwing, although the verdigris being greenish does tie in with the tac squad colouring I wouldn't want their brass to have this effect. The same brasses are on the drop pod and dreadnought. Too much thought is stifling this whole project, no wonder I haven't touched it in weeks. 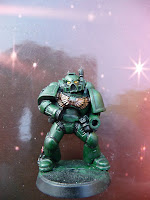 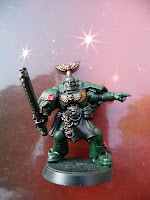 The sad thing is that aside from the battle damage, targeting lenses, chapter markings and bases I think these are nearly done. There's not a whole lot left to finish the Deathwing off which I know would be a real boost to my motivation. The Tac squad isn't too far behind either. The fact is my priorities are fixed for the next few months but come April I may well be spending a lot more time and effort getting these things done but any little bit I can do between now and then will just make things go smoother.
Posted by 40kaddict at 13:07