Afternoon #warmongers and #warhammercommunity I've been back #paintingwarhammer on my Genestealer Cult Aberrants. One of the reasons I had flitted over to other projects, rather than push on with the Aberrants was these guys. Among my diverse genestealer hybrids there are those that are Turqs. On Ferron Proxima there are vat-grown gene-spliced humans, that are turquoise in a nod to Rogue Trooper. 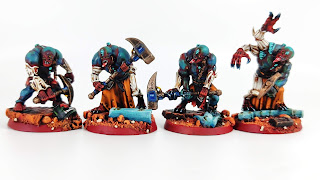 These Turqs are often used in menial tasks due to their enhanced endurance and toughness. What the people of Ferron Proxima don't know is that gene-splicing is xenos DNA based and is part of the Free Radical Collective's insidious attempt to overthrow the planet. Of course they had to hide their efforts well - many of the Turqs are not cultists or even hybridised. Their gene-splicing is so successful not even a Gamma level Magos-Biologis could detect even the tiniest hint of Xenos DNA. 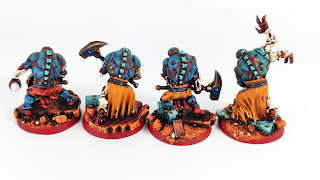 But along the way the Genestealer Biophagus will have had numerous mistakes - hence the Aberrants until they were able to combine the correct hybridised DNA of both alien and human. This way they would have all the benefits of the xenos, their compliance before the Four Armed Emperor and with Turqs already as part of the population they could then hide in plain sight until the time of the uprising. 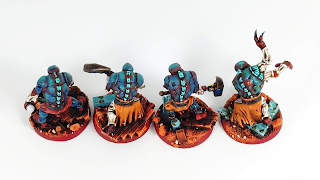 Anyway, these four looked so good without highlights [the one on the far right]. I wanted to 'finish' them off before I decided on how to handle the turquoise skintone and whether to highlight or not. I wanted a record of them at this stage at least so I knew what I was losing or gaining. 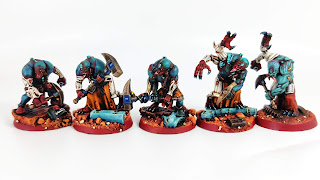 This is definitely an option to explore in the future but now that I see everything fully highlighted I think to leave the skin without any further tones would be a mistake. They may not be quite as extreme as the original. I still think there are some beautiful tones that I don't want to lose, but luckily there are areas in shadow where I can retain them. It was funny actually because all the others are finished and I though all I had left to do was varnishing and then remembered these 4, not to mention the Abominant too! 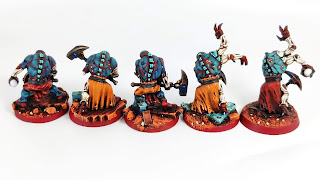 So, one more session, varnishes and then TO DONE! pics.
Posted by 40kaddict at 12:00