Afternoon #warmongers and #warhammercommunity I've been #paintingwarhammer Genestealer Acolyte Iconward. Another hobby 'chaser' - something I tack onto other painting as and when I do it - paint some orange - do this banner, paint some red - do the robes. 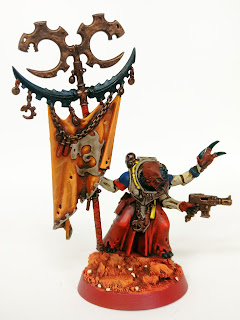 He's slowly getting there, I'm not convinced about the red wrappings on the banner pole but it'll be easily fixed with some wash. 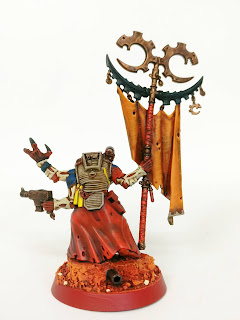 It's been a slow burn project over many many weeks, but I'm OK with that because I'm not really focusing on it all. I'm expecting at some point to just wake up and find I've completed him! But I did all the highlights on the grey and white and picked out some more details. 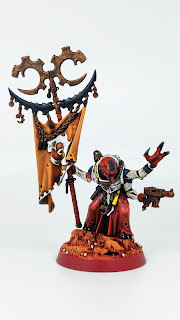 You can see it alongside one of my other acolytes and once again I've managed to retain some consistency despite many months, even years between two. In fact they make a pretty nifty pair, even though the Iconward isn't even complete yet. 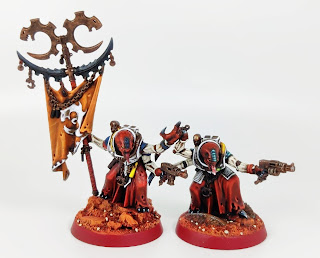 Still plenty of little bits and details to pick up but no rush. I do find all that ribbing on the body armour surprisingly difficult to do. You can see that despite all the ridges I cannot seem to make my highlights stay solely on the peaks. Not matter what they always seem to bleed into the creases. I can live with it but it's a constant annoyance 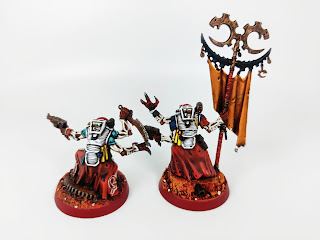 Looking forward to doing the Free Radical Collective freehand too, it's been a while since I'd done it but it should be fun. Hopefully next update is TO DONE! whenever that may be 😉
Posted by 40kaddict at 12:12