Belated 5th Anniversary of the birth of the Man Cave

Afternoon #warmongers and #warhammercommunity I've had my man cave for 5 years now, it was originally installed on 27th July 2015 and as I've been a little busy this year with painting my kitchen, bathroom and fence panels I hadn't had time to celebrate.

Additionally, I'd been planning to repaint the shed so I thought I'd just wait a bit so I could share it's fresh new coats. 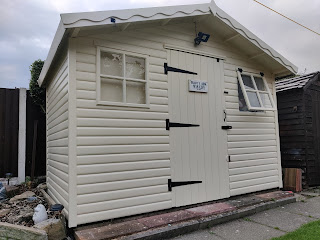 I had to sand this baby first, which was an absolute nightmare. So many people say preparation is important but I hate sanding. But I did it, washed it down and got two coats on the front and sides. 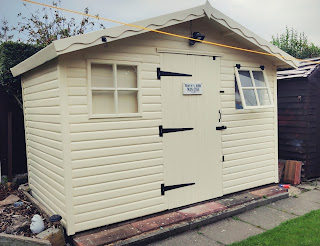 Once again I scrimped on the back, I only did one coat, it's a nightmare to get behind between the shed and the hedge and I'm constantly at risk of cramp or pulling my back again. 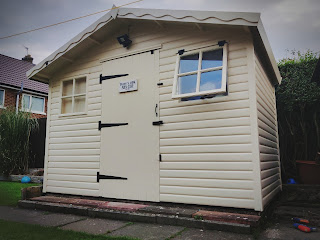 I'd previously filled in all the nail holes so it was much easier to paint this time round. I've a third of a tin of paint left, I may do that again next year and fill in some more gaps in all the corner strips and the bevelled timber. I'd thought about doing it this time but just wanted to get on with it. Hopefully I'll have more energy next time. 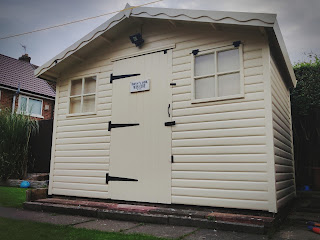 Also I painted all the metal work black. I used some matt black spray in some places - the door latches which immediately came off on the Cornish Cream paint. I also used matt black Humbrol enamel on the hinges, just to give it a nice touch.

As I continue to work from home and my wife needs her workspace on the landing back I may well have to tidy inside so I can set up my laptop and work from here. Surrounded by hobby I'll have to resist the temptation though and keep focussed! 😉
Posted by 40kaddict at 12:07