I love the simplicity of Deathwatch Overkill. I think it might have been a stepping stone in the game design of Warhammer Underworlds and Blackstone Fortress - limited models with the use of cards to buff or reinforce what's on the board. It's a frustration that I've never played past the 4th mission. However, at the beginning of lockdown I managed to cajole my youngest into having his second game, I can't recall how long ago we played mission 1 but I don't seem to have a record of it on the blog. Mission 1 is incredibly easy for the marine player, it's a great introduction to the game and letting him play as the marines gave him a sense of achievement that would hopefully encourage him to play again... like I say, I can't recall how long ago that was!

So, we played mission 2, essentially I have control over some comms relays in the top right, kill-team Cassius must occupy the four relays. He has 6 team members to do it, if I kill 3 he fails. 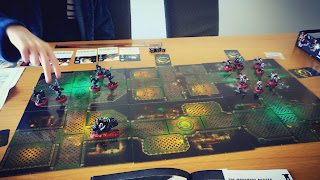 Some early ambushes flooded the board with cultists appearing from the shadows. 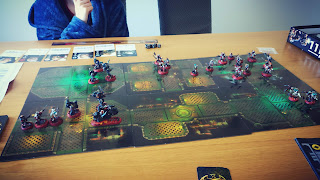 But as usual they fell to significant shooting from the Deathwatch 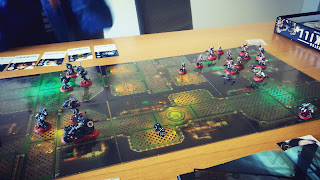 This meant the marines could try a two pronged assault, coming on from the flank with the fast moving White Scar and Blood Angel, while being covered at the rear by Rodricus Grytt and his Frag Cannon. 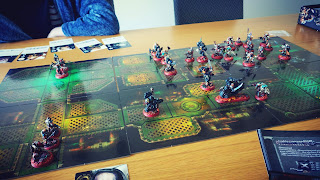 A couple of Purestrain Genestealers tried to take on Edric Setorax claw to claw... 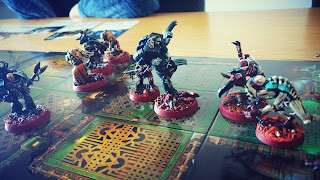 But both of them and the Aberrants who had faced Vael Donatus failed to capitalise on their ambush. 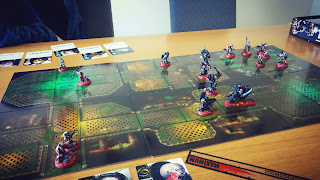 With such fast using units the comms room suddenly became packed with bodies, with at least one fallen from its comms relay leaving it open for capture. 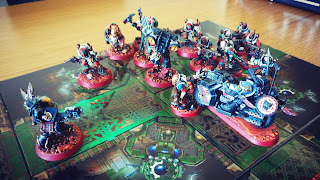 Despite this more Genestealers were incoming but was it too little too late? 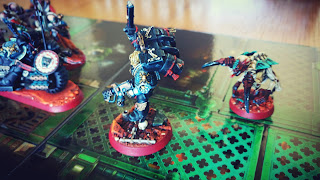 At this stage I was struggling to make a dent in the Kill Team, Setorax had clearly taken a wound but I couldn't convert it to a kill. I decided to just make the best of bringing on bodies, using the gambits [stratagems] may well have been more productive but they felt a little shady and I needed bodies on the board, but most of them were coming on too far away to reach the melee in the comms room. 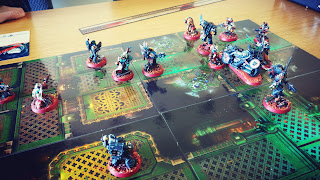 As the Kill Team pressed forward there wasn't much the cultists could do to hold them back with 3 out 4 of the relays occupied it would only require a small push for Donatus to capture the last one. 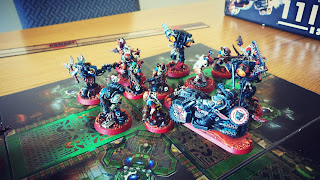 Which he did. As you can see many cultists were converging on the comms room, but for all their meticulous planning they would arrive too late as the Kill Team destroyed all the relays. 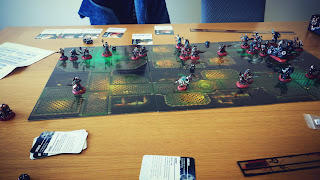 There we go, another win for Kill Team Cassius. I had a fun time with my son, there were numerous times where the dice rolls caused roars of success and cries of failure. Not sure the bug has bitten [no pun intended] but I think he finally saw what it was about. Whether we play again sooner than last time is anyone's guess but for now I'll just take this for what it was 😍