Afternoon #warmongers and #warhammercommunity I've started #paintingwarhammer my Blood Bowl Troll. It had been annoying me that this figure was just primed black. I needed to break it up so I could see where the Troll began and the uniform ended. As it is I haven't decided on my Ork team, I was thinking black armour with rust and stains. 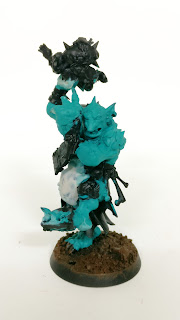 Having done a little black and rust on the Blood Bowl Ogre I thought it might be fun to carry that through on the Orc team. Anyway, the Troll was really about making a decision on skintone. Again, I'd seen an amazing Troll/Troggoth that I liked but forgot to bookmark it, I was sure I'd saved it to my phone but can't find it. But I pulled the trigger and went with turquoise [yeah I know I must be obsessed]. I figures it's something I was familiar with - aside from the nids I'd done the 'Turqs' in my Genestealer Cult army. But I also added a pale grey belly, which I think aligns with how trolls are being painted nowadays but it also is a challenge as that will eb new for me. 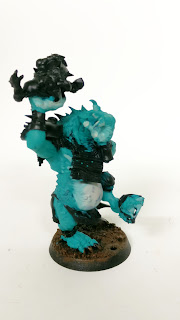 The stony plates on the back might end up like my nid carapace. Again, this was the element that I'd seen on another troll that impressed me so much but I can't recall what it was... I'll just have to wing it. 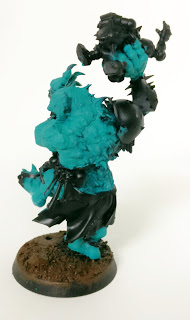 Anyway, I'm just glad I've got something else to look at on it and try and work out what is going where. However, I don't think it'll progress much further than this for a good while. I'm pretty sure I'll just look at the Orks themselves - I'll do all the skin on the Orks which then gives me the next step of the armour and clothing and then that should feed into the troll.
Posted by 40kaddict at 12:12