Just a quick update as the alternative is no update. I've actually completed my Interrogator Chaplain Seraphicus but haven't taken any decent pics to showcase. Truth be known I'm a little disappointed with the gloss varnish I've added to his power armour as it's a bit thick in places so it plays merry hell with the sense of scale on the model, but I'll cover that in detail when I take the pics.

Meanwhile, I've got back onto doing the Deathwing and I've managed to go from two models with completed Bonwehite highlights to four. I'm really happy with how they've come along, they're lighter than my original AoBR models but that's down to how I'm highlighting the 'nids. It's slow going though, it takes about 60-90 minutes for me to do just one! Still it's the bulk of the model. I am however less impressed with some other colour choices. The black feathers still don't ring true to me but I'll see what a very fine grey highlight will do to differentiate the feathers. Also some of the reds are getting a bit samey, when I need different shades to represent different materials. 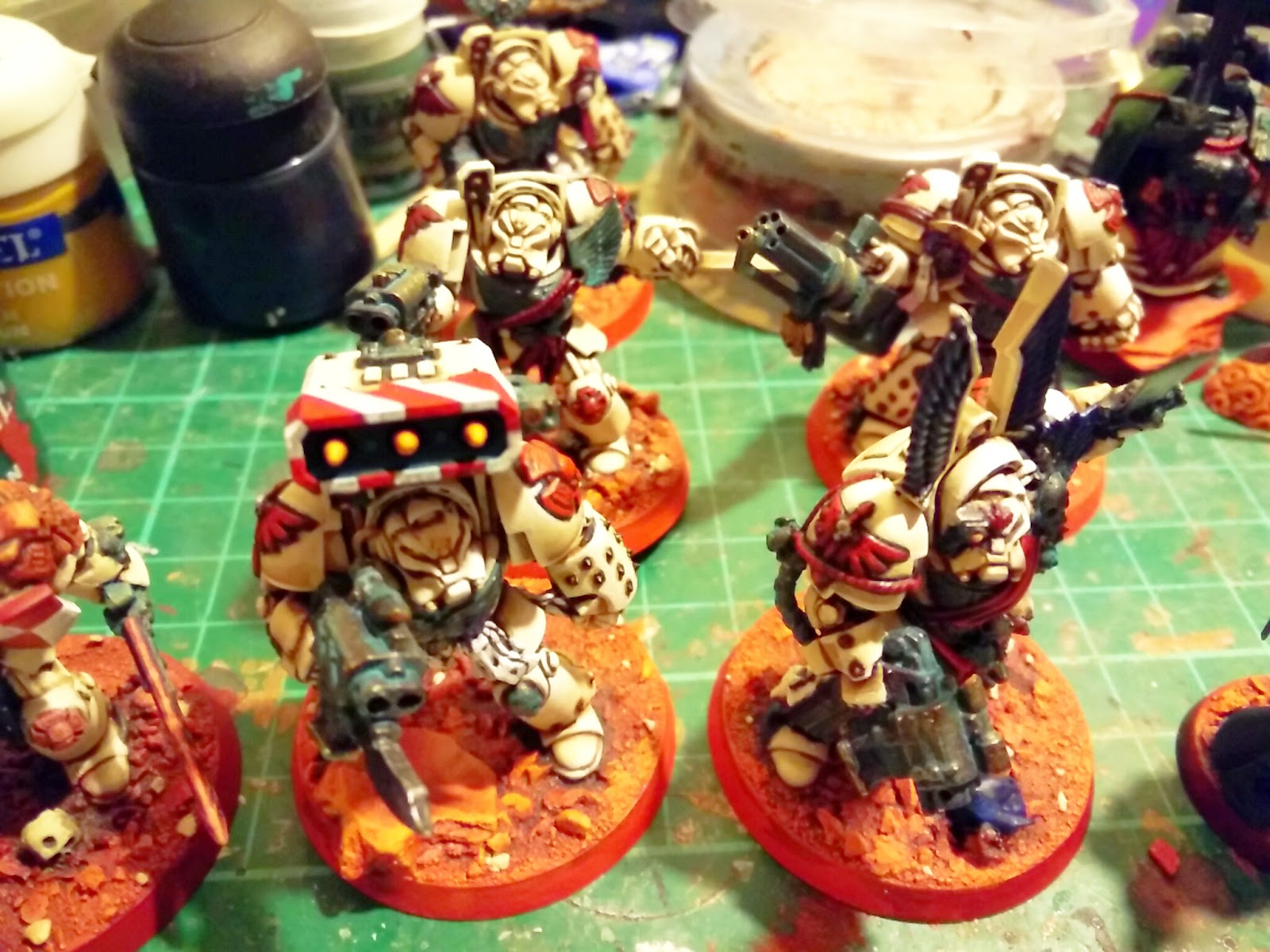 I still have a lot of detaill work to do, the odd skull, studs, helmet lenses and some more highlights on the Crux Terminatus to represent the Ferron stone it's mined from. I'm sure these will add quite a few more hours to the process but I'm getting there. With only one model to highlight I'm beginning to see the light at the end of the tunnel. 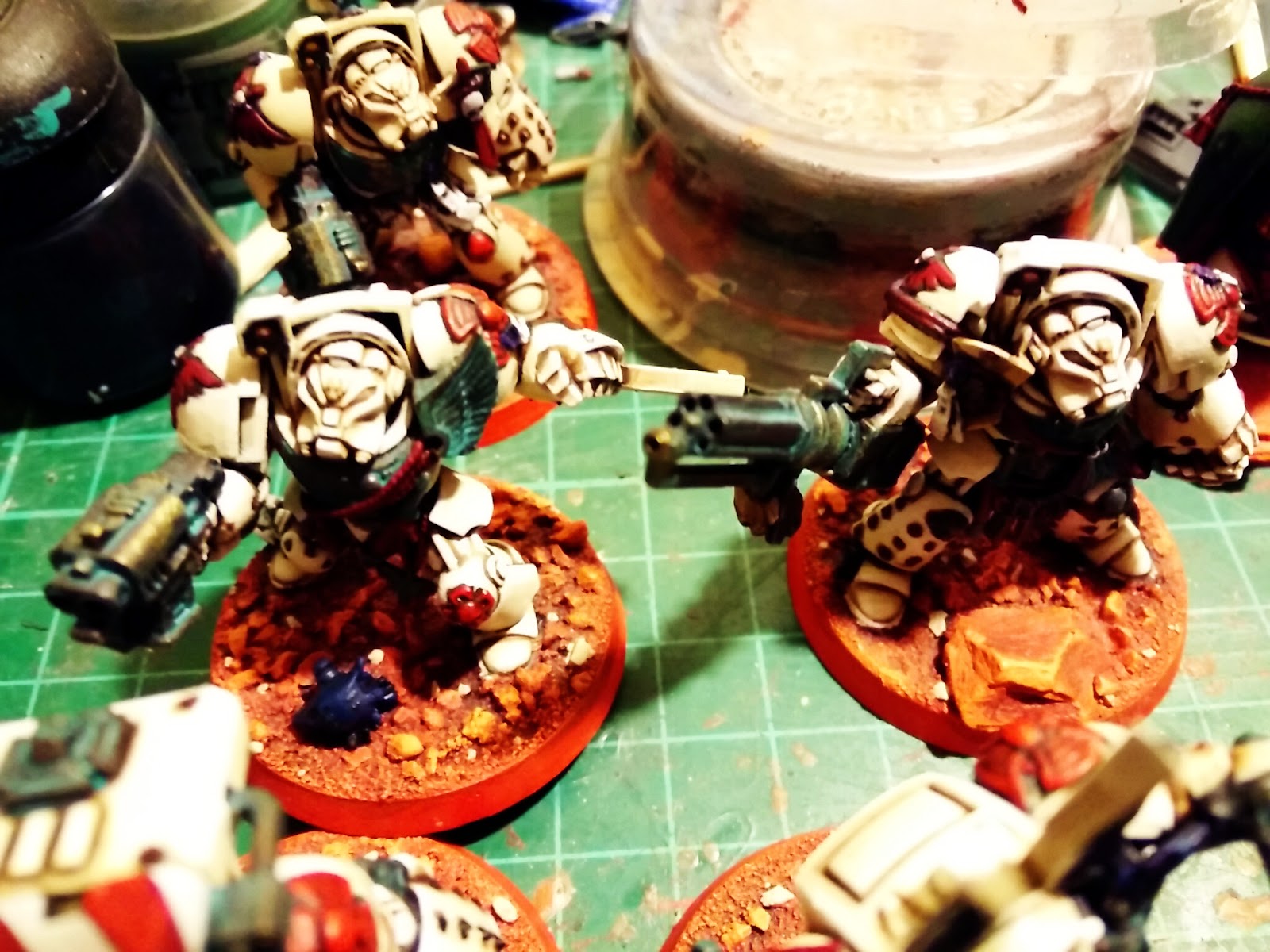 I've also realised something in that i started to add litanies to the AoBR Tactical squad but did not do any of that on the AoBR Terminators. That's not a problem, I can add them on at any time. I also want to include some of the native American elements as illustrated in the Space Hulk Deathwing supplement. Lame Bear's chevrons look particularly effective. I want a mix of both histories - feudal and native as Ferron Proxima is based firmly in this era of the Dark Angel histories and yet those prospective applicants to the Dark Angels will have been drawn from the Natives then trained in the Feudal ways of Caliban 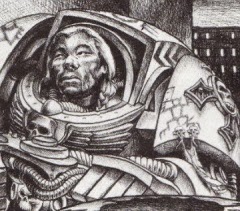 I'm not so sure I'll include Totemic names but I'll be doing litanies at the least, I just want some opinions on choice of colour - 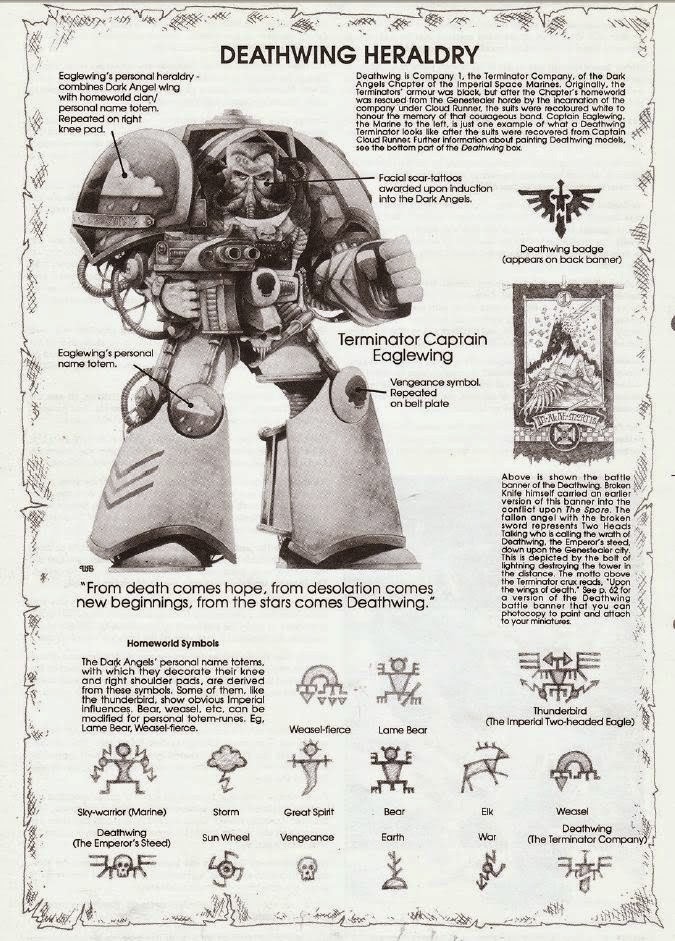 There's no right answer on this as I'll no doubt do units with different colours. Red I think is the obvious choice but opinions are most welcome.
Posted by 40kaddict at 12:47