Things have been a bit disrupted this weekend [I know it's now Wednesday but fallout still surrounds me]. On Friday I thought I had a game with Ben but it transpired I'd not actually confirmed so he'd got Otty to fill in. Kindly he said I could pop along and watch so I arrived to witness potentially one of the most painful games ever. As you can see from Otty's deployment he was tooled up, with a Barbed Heirodule, two Fleshborer Hived Tyrannofex, two Tervigons and 30 Termagants [28 Devourers and 2 Spike Rifles] with 5 Dev Warriors and a few Zoanthropes to boot. Essentially he had a ton of firepower. 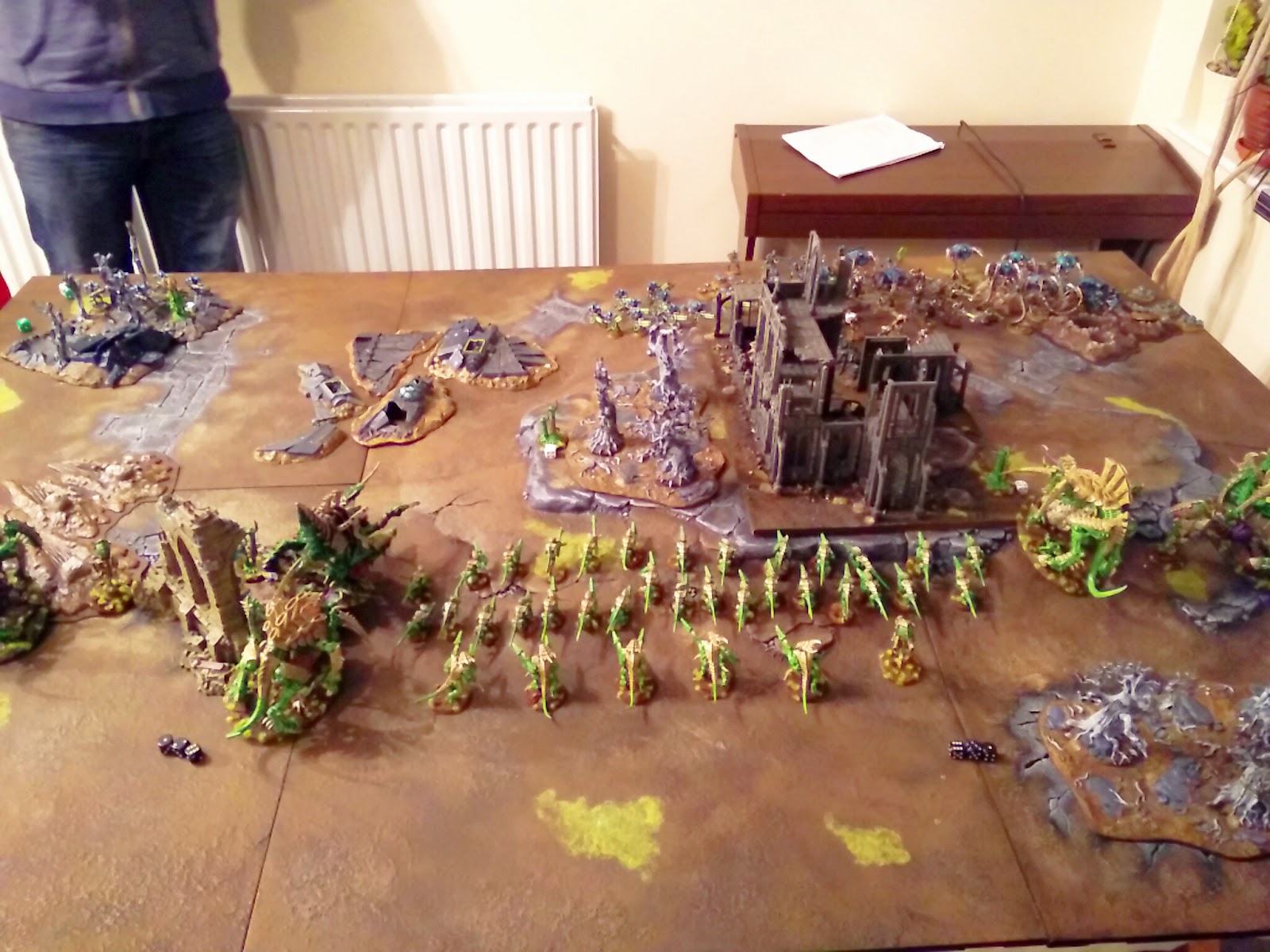 He lined up against Ben's Decurion detachment with Flayed Ones, a couple of units of Wraiths and Spyders and Scarabs. None of his usual Annihilation Barge shenanigans but instead what do we get 4+ Reanimation Protocols 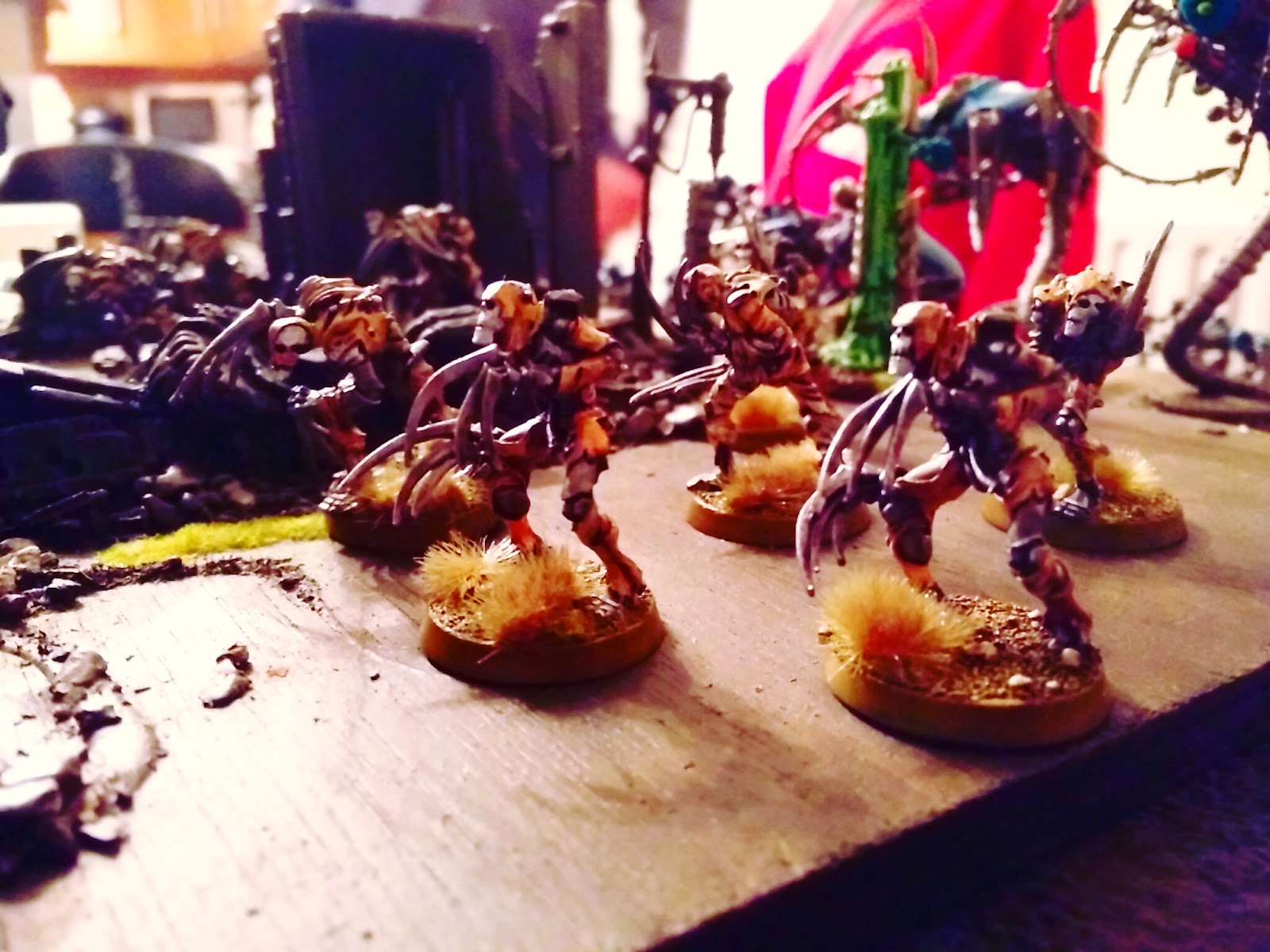 Essentially Otty threw everything he could at these robots and just couldn't kill them. 5 would die and then 5 would reanimate, admittedly that's beating the odds but there were so many dice being rolled just none of it was ultimately productive. 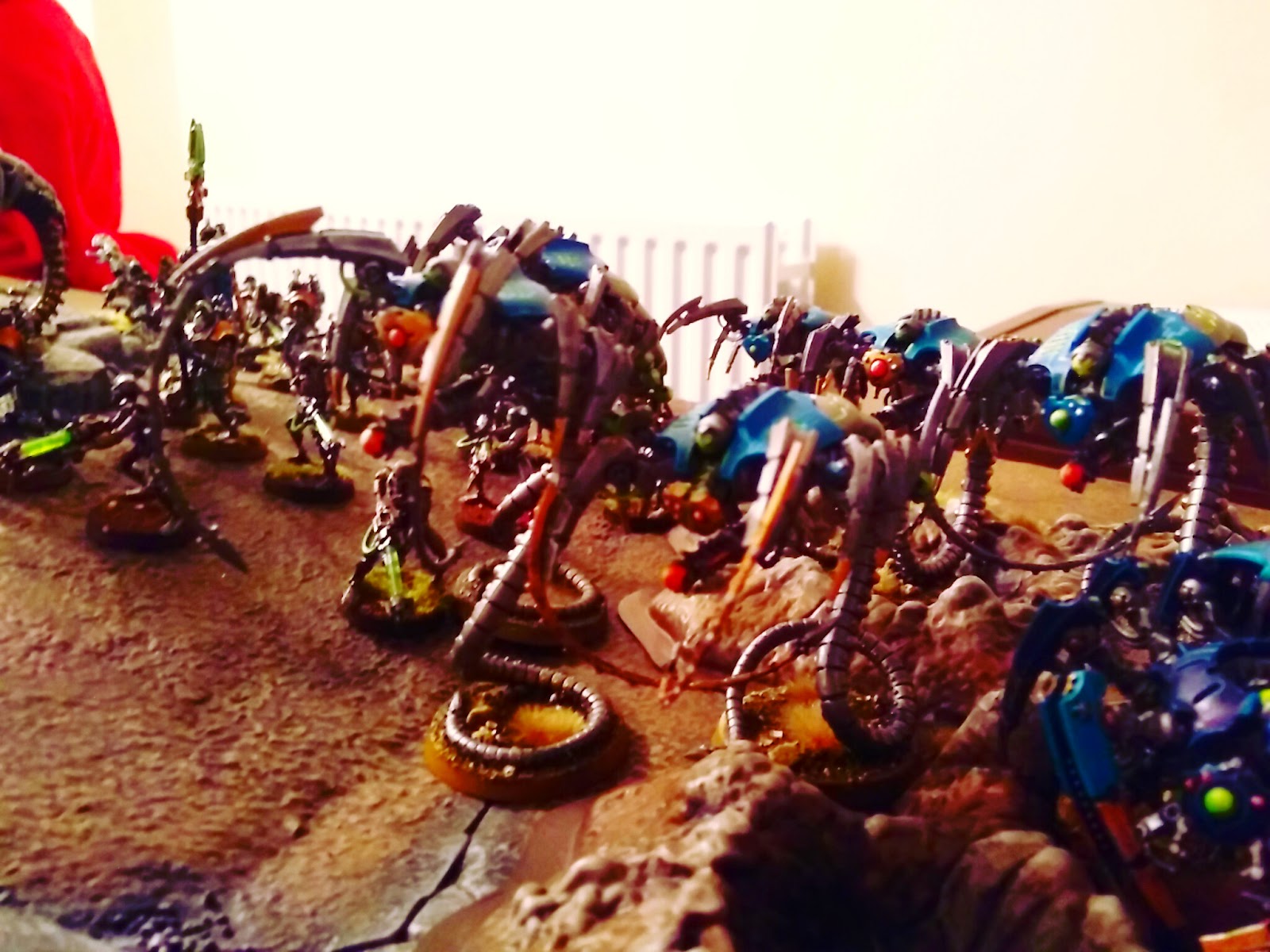 Even playing the Maelstrom missions became pointless because he became bogged down with the highly mobile elements of the Necron force. It some became apparent that there was not a single element of Ben's army that wasn't useful and also durable, zero fat! Wraiths with their speed, invul saves and killing power, not to mention that gun they have that was only prevented from insta-killing Otty's MCs by some handy Paroxysm rolls stopping them shooting straight! 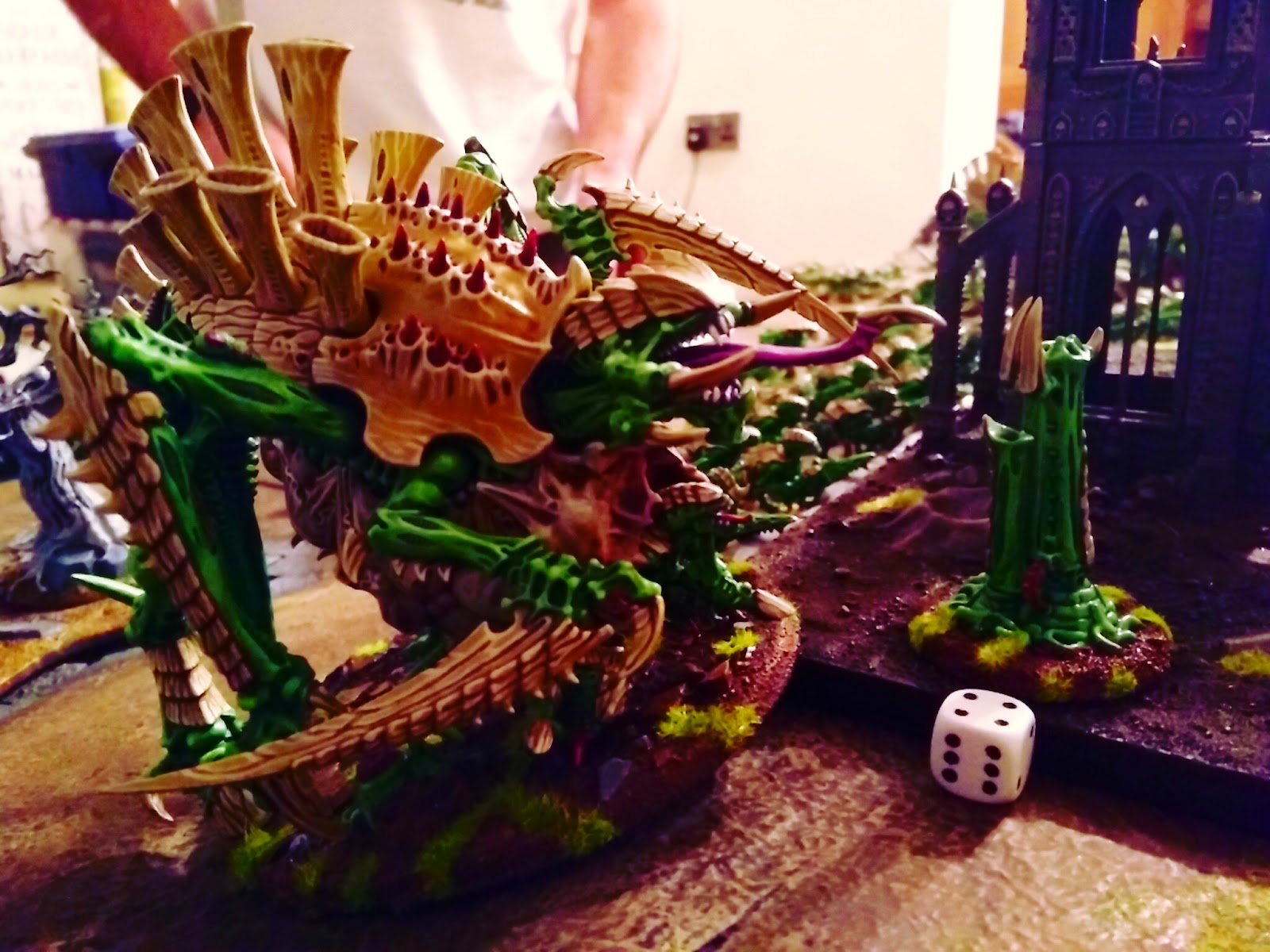 Even the Heirodule was a little ineffective, although that was more from deploying first and Ben then leaving it slightly out of position to actually making any meaningful effect on proceedings. 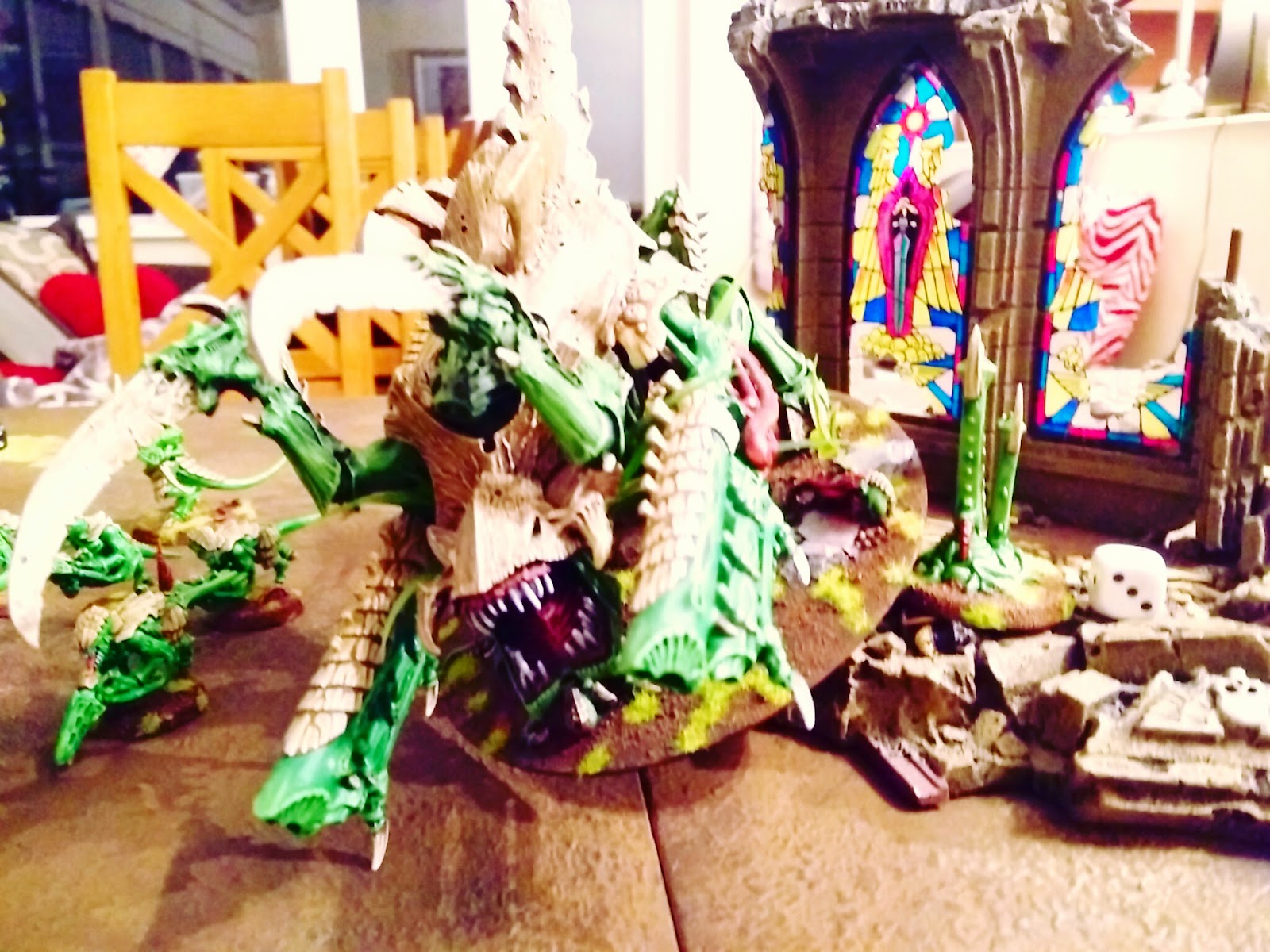 His 12 high strength low AP shots were still useless in the face of Reanimation protocol. 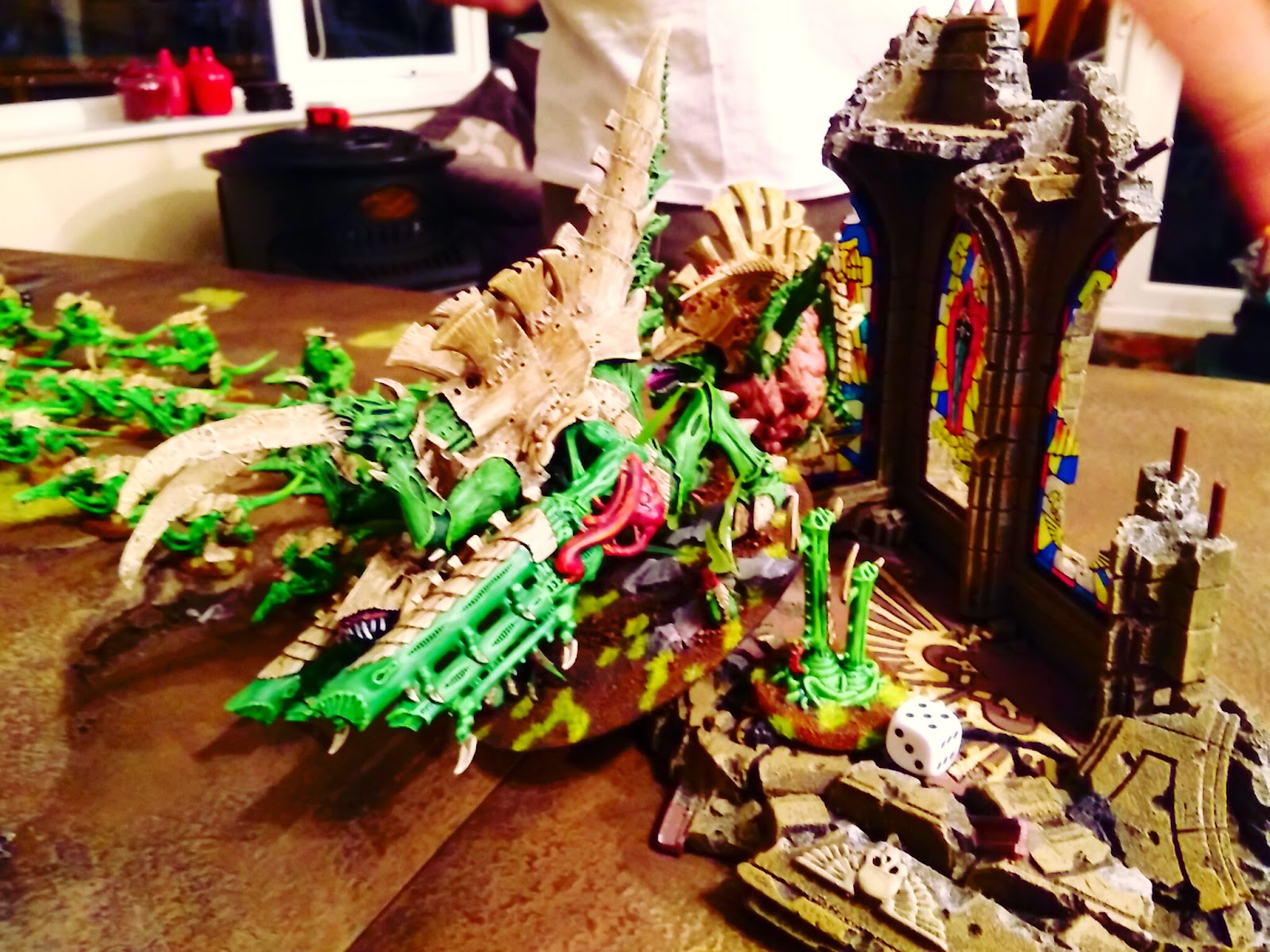 This was never going to end well, although it did take a few turns for the inevitable. 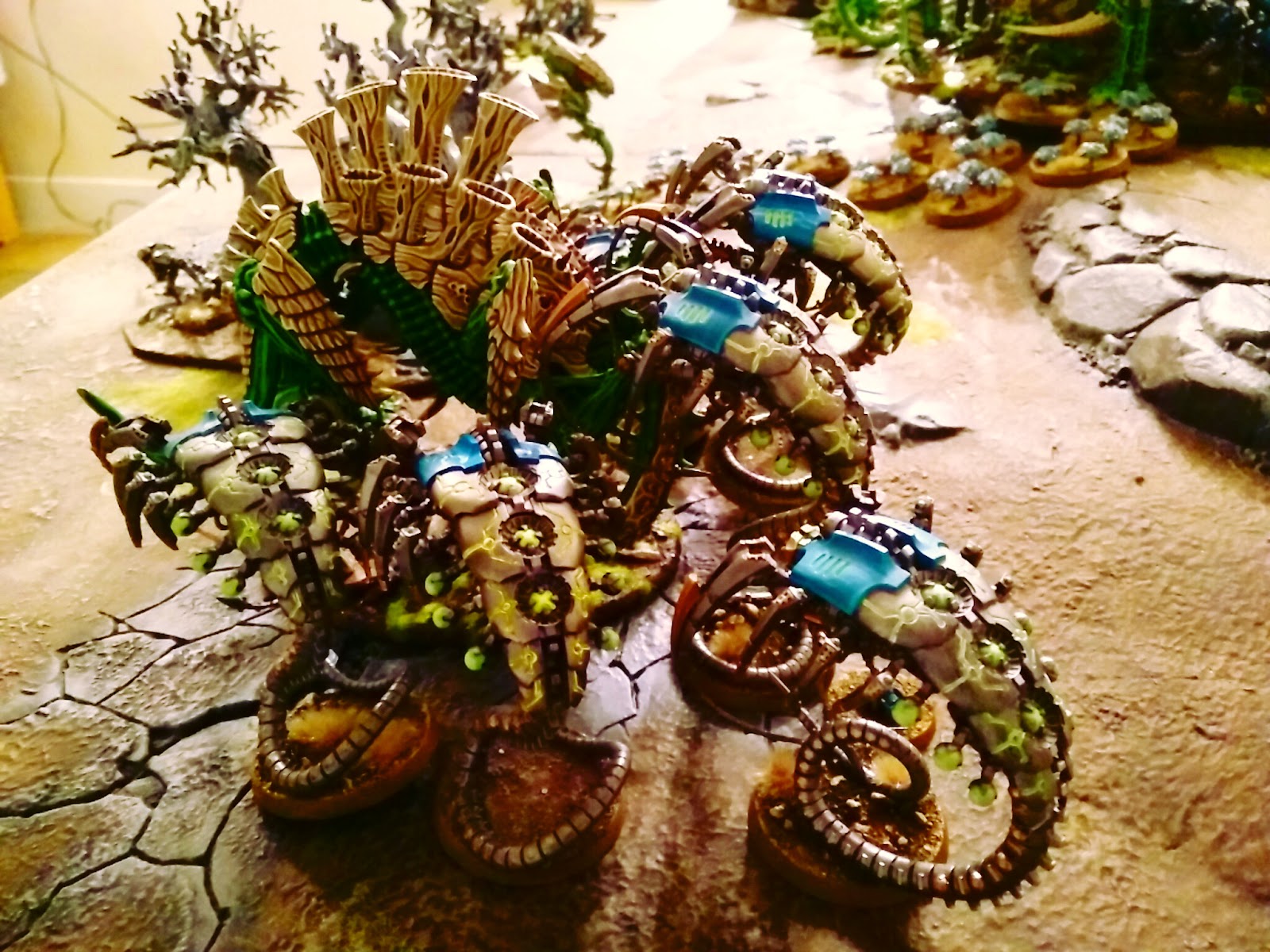 And I think it's even clearer where this was going

I found myself wondering if I could have done any different and I'm not sure I could. You can't hide from them, they're more mobile - they'll hunt you down. I haven't got as much firepower as Otty has and it aided him nought. Air superiority is an option but you lose out on securing objectives when you're swooping. You can't assault because you get overwatched and even then there are assault units that can be even more devastating than the Tyranids very own 'premiere assault unit'! 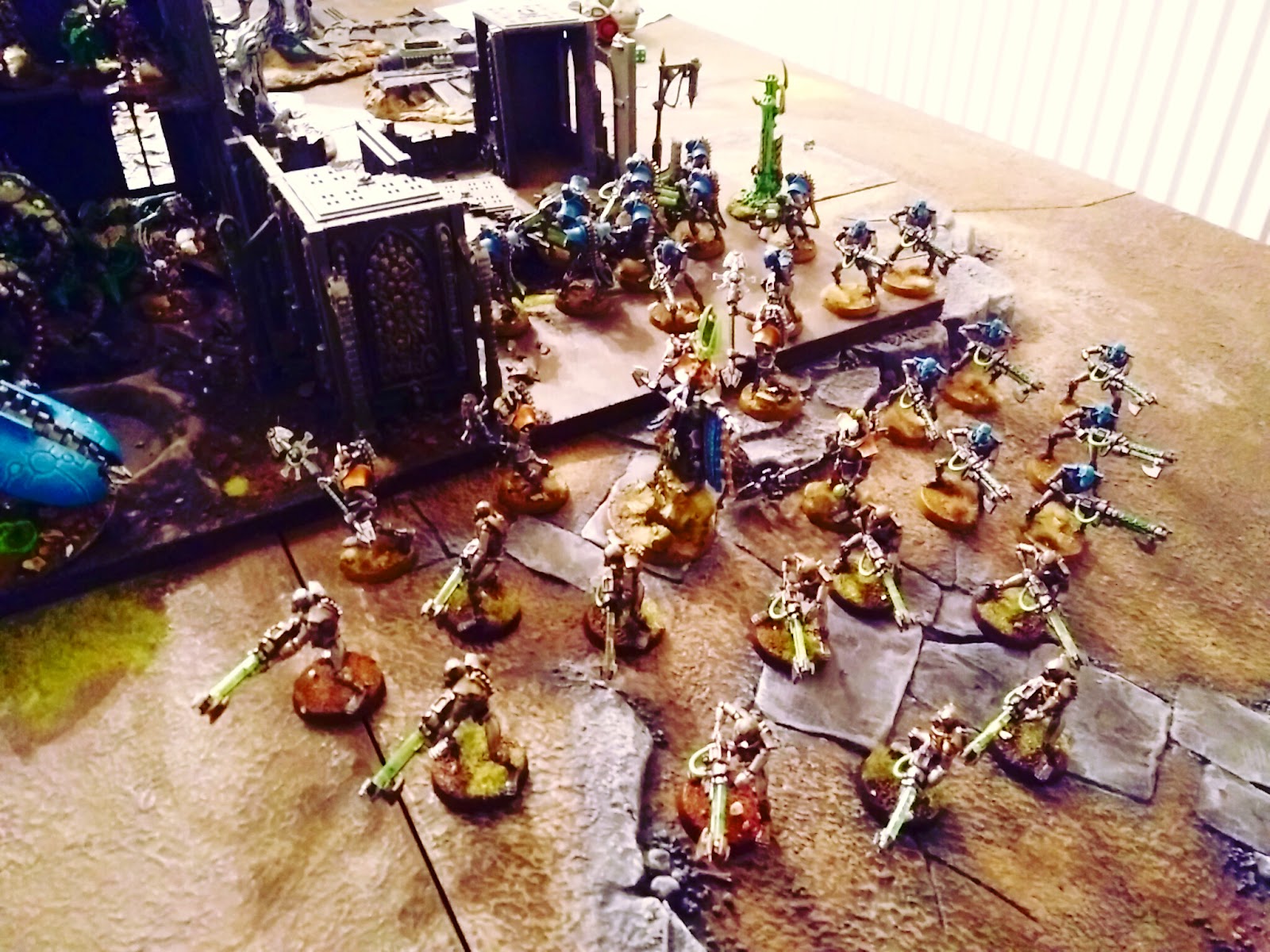 I was literally stunned by the one-sided nature of the whole thing. That's not to say Otty was tabled, far from it, it was just that he loads of stuff that worked really hard for no visible gain. Ultimately the game came to a close at 12:30am and I returned home with a bit of a head ache - lat night I thought. I then spent the entire weekend bed-ridden - nauseous, head aches, joint aches and a variety of other symptoms less appealing to discuss. I was dreaming/hallucinating flashes from the game and also Ingress it was truly horrible. Even today my head is still befuddled and stomach is upset. I had to cancel a short notice game with Ben tonight because I can't manage to stay up passed 10:30 without feeling exhausted. I don't know what it was, whether it was an uber migraine or some viral thing but sadly it's stopped me from any hobby progress. Hopefully there'll be something to follow, although my plan for the month is pretty much out the window - I'll be pleased with just completing the Deathwing or even just one of the characters!

Anyway, hope things return to normal soon, till then if you've faced a Decurion then share your pain. If you haven't you can always share the pain for your most recent illness ;)
Posted by 40kaddict at 13:07