This is the first time I've ever had chance to game with Otty, outside of our own mini tournament events. As a paramedic with four kids and recently moving house he's got plenty on his plate so it's always been difficult to fit in around all the other commitments. However, that all changed the other night and it was a glorious game.


The low down:
First of all Otty set up his modular board, there are some pictures at the end but this is really cool. He spent ages making this and a few months after GW came out with the Realm of Battle boards but it's still nice to give it a go.

Anyway, setup meant going second wasn't too bad, what with my Warlord trait allowing me to infiltrate, however there wasn't many options and those three Wave Serpents were going to ignore most of the advantages my newly minted Malanthrope, cover from the crater and Night Fighting was going to give me. I contemplated deep striking the Flyrants but thought target saturation might keep me alive so bundled everything in the middle. 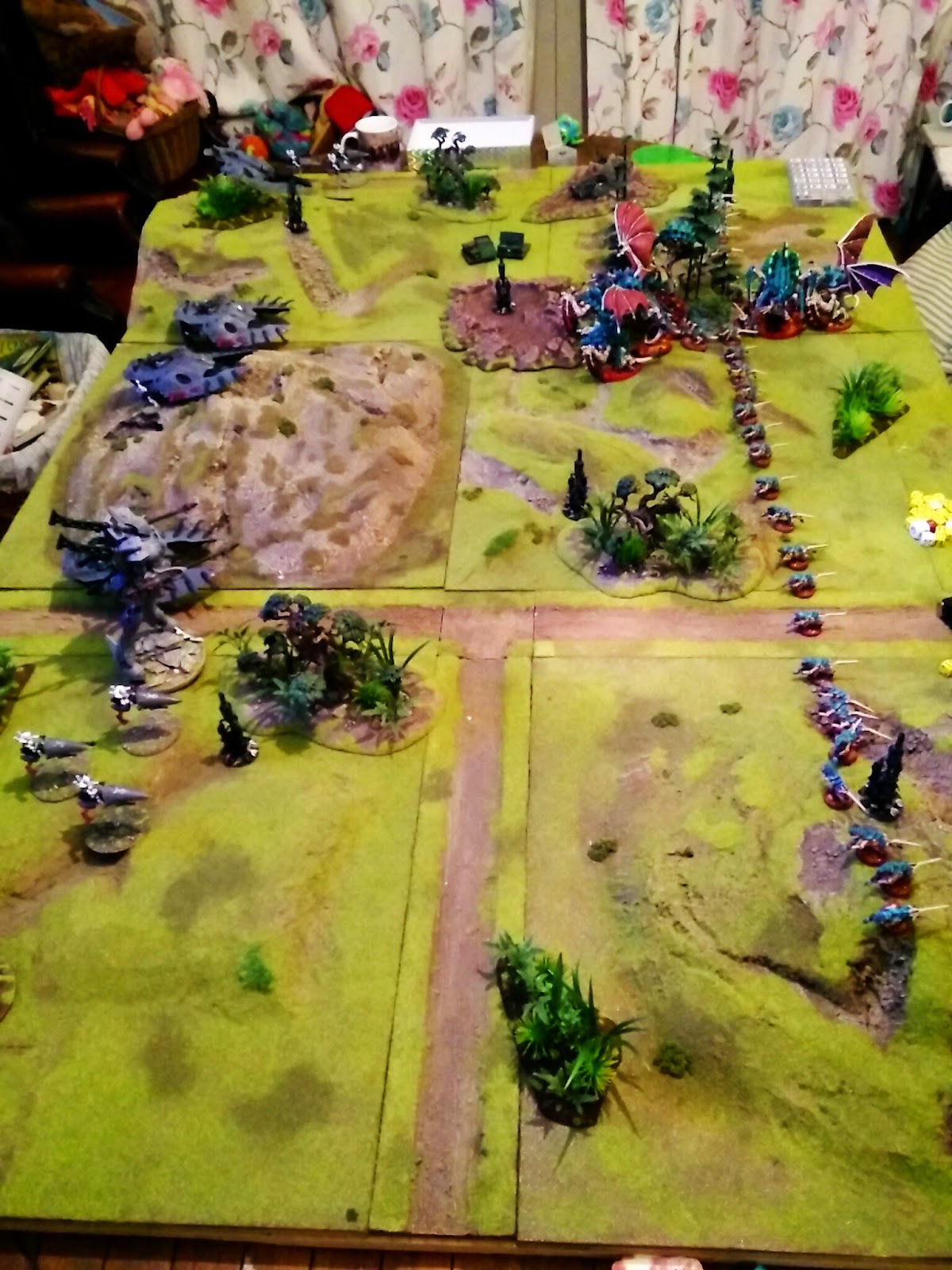 As you can see it worked, after a fashion. My Warlord Flyrant took 3 wounds. Where's a Bastion to hide behind when you need one? Well luckily for me at home as Otty had drawn destroy a Fortification as his objective, but with none available he threw all his Wave Serpent shots at the Flyrant but he managed to survive. 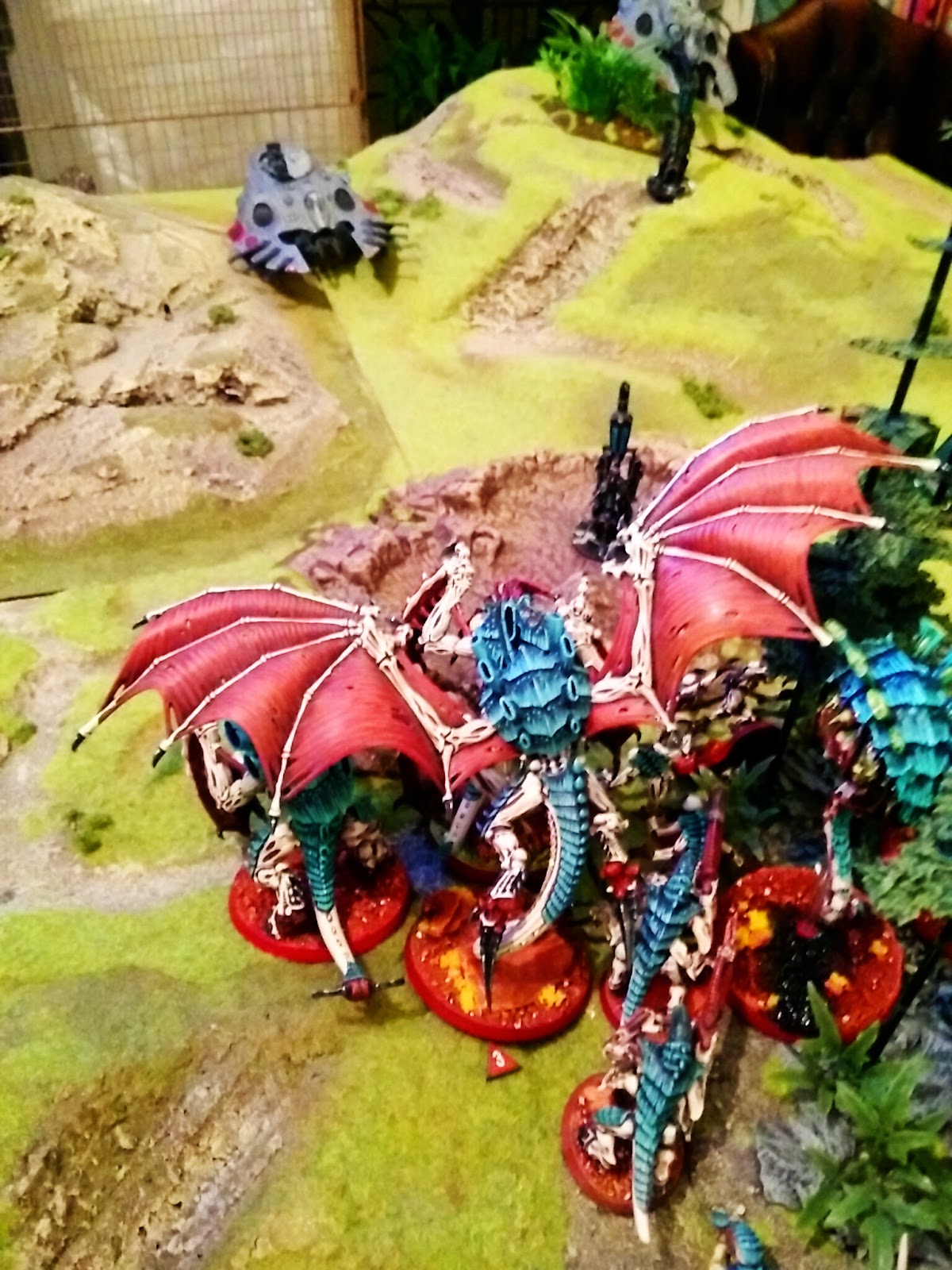 Meanwhile his Warp Hunter fired on the Tervigon, he survived the blast thanks to the Malanthrope and tree line but the second Flyrant took a wound. The swirling cloud from the Malanthrope must have affected the Wrathknight, he couldn't even hit them, let alone wound them, with both it's cannons. 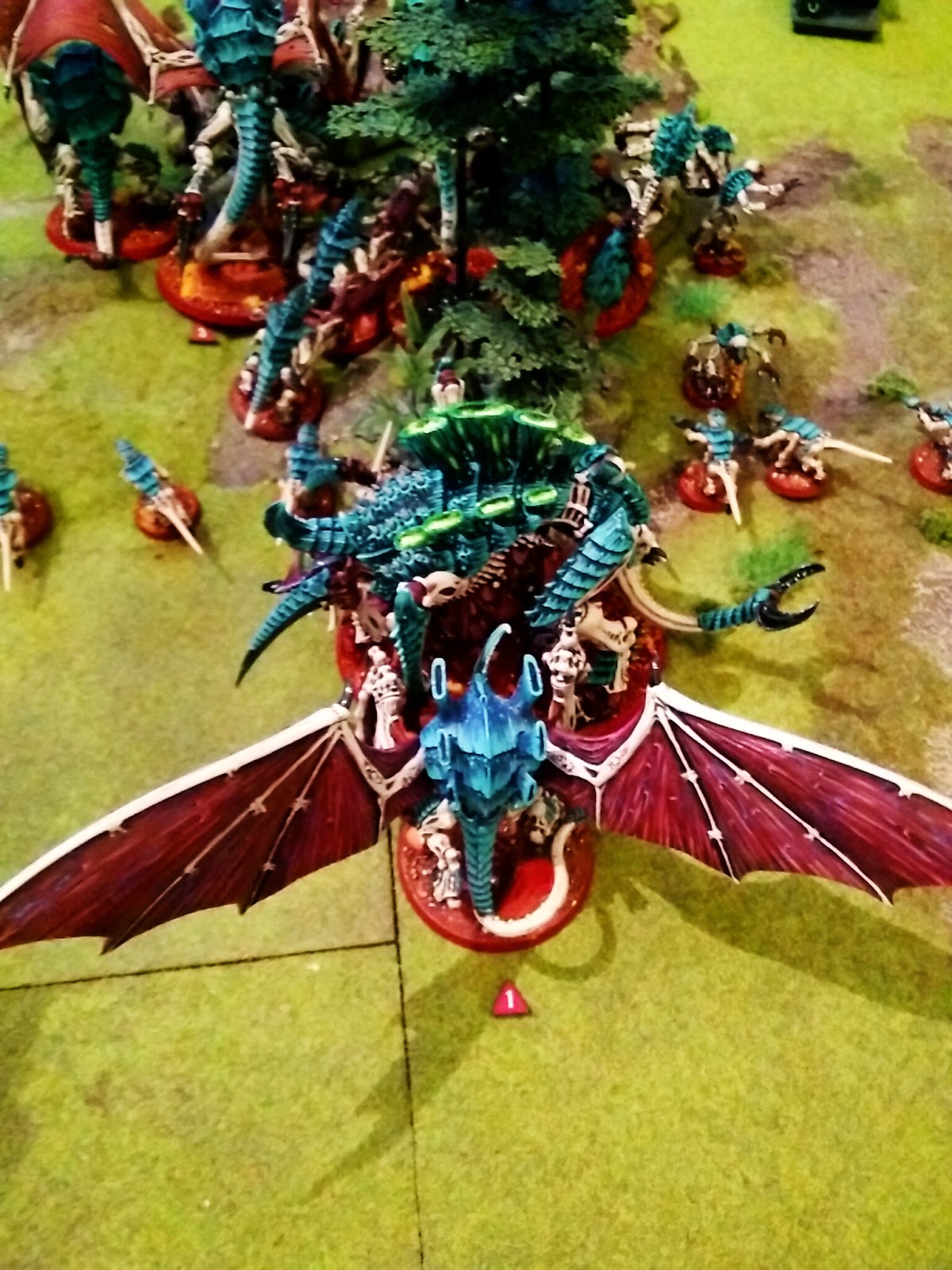 My turn 1 and already running into 9:10pm! I spawn 12 gaunts, move everything up [obviously] but I'm looking to assault the Jet Bikes at the bottom, hoping to slingshot my entire Termagant conga line into Otty's back field. I'll lose an objective but I'm thinking the manoeuvre  will pay up in speed. 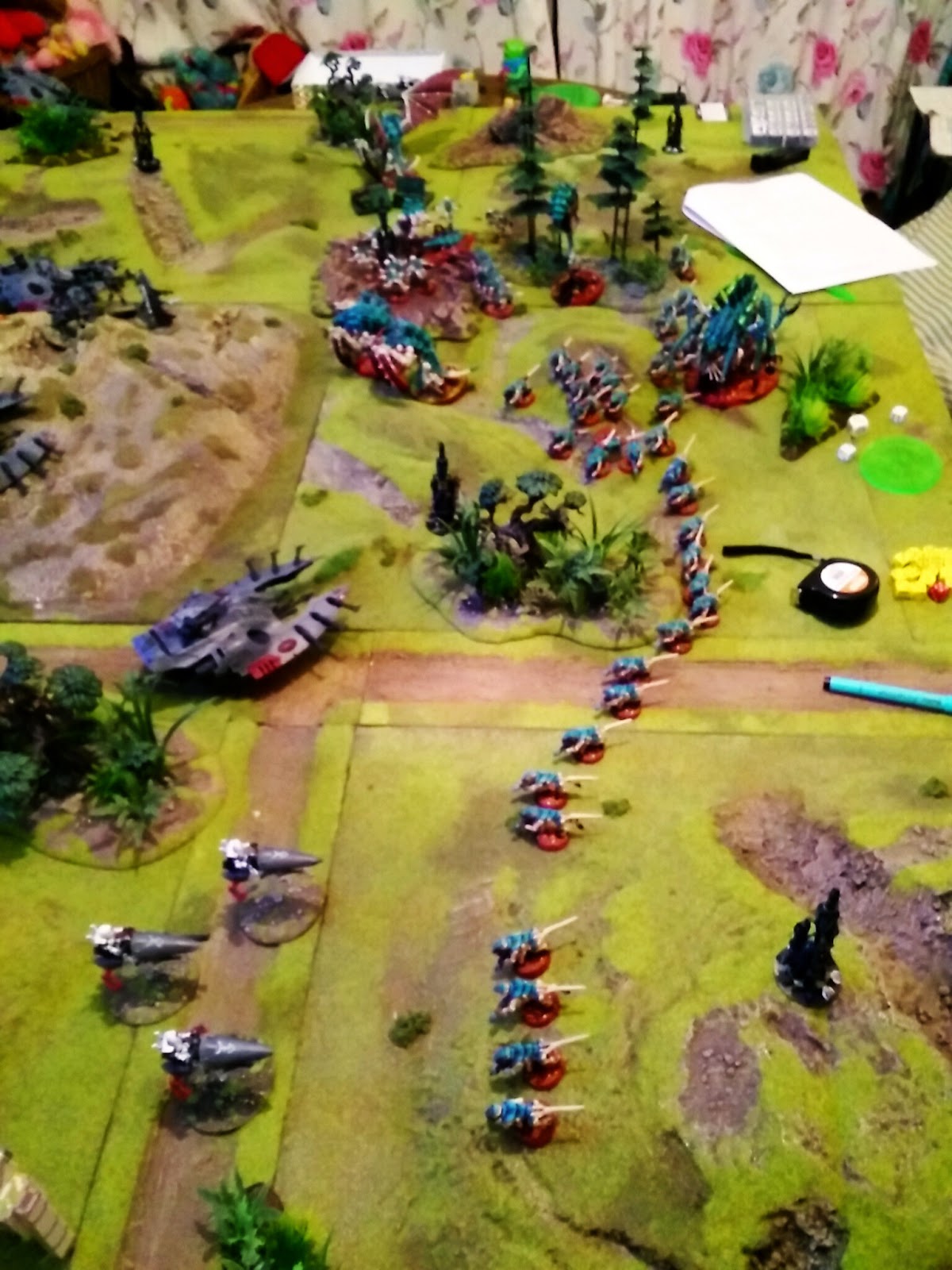 I've drawn the objective to score D3 VPs for killing Otty's Warlord so I target the Wave Serpent with the Seer inside, I unleash everything I have managing to wreck the tank gaining First Blood, but I've nothing left to get the occupants with. My Hive Guard whiff, and other Flyrant manages to break the Jet Bikes on the right flank. I've been slightly more successful than Otty but my Termagants need a 6" charge to get the Jet Bikes but can only manage 5" and fail to assault. 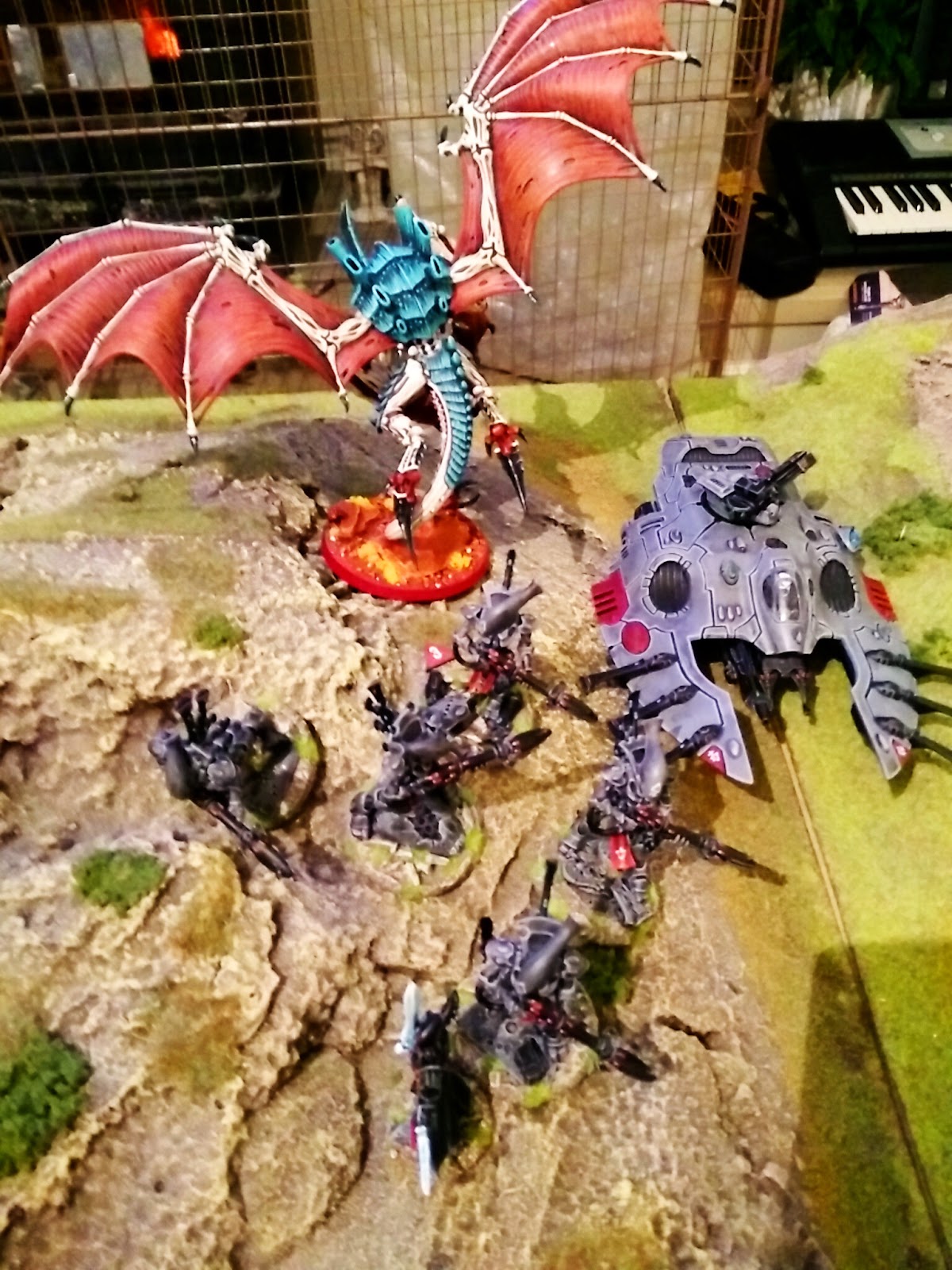 The Dire Avengers disembark from their transport and take cover, even in the tops of the trees nearby, securing another objective, Now Otty has to issue a challenge, something he can only really do with the Spawn of Cryptus or the Flyrants, who aren't going to get down on the ground to assault! 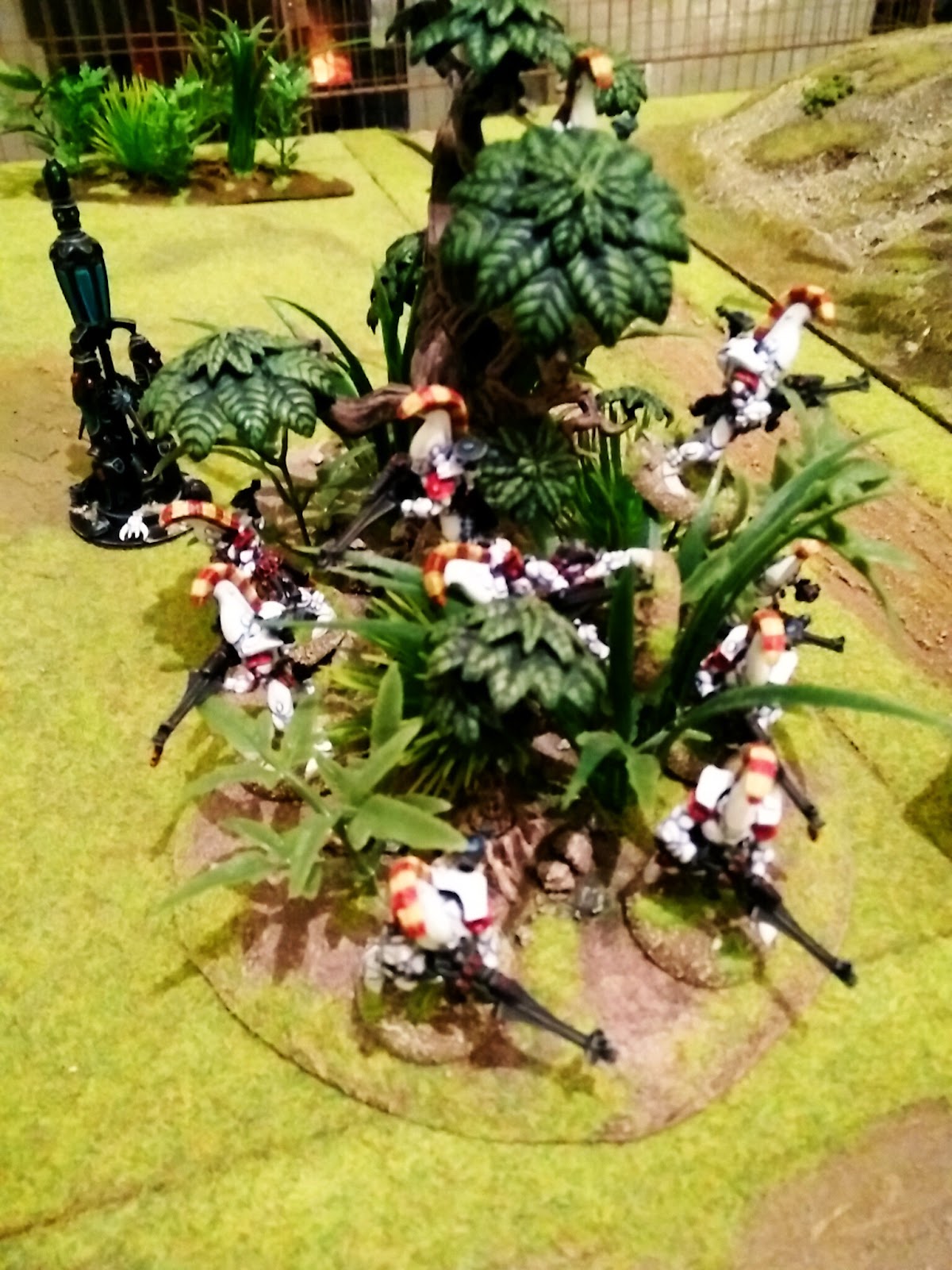 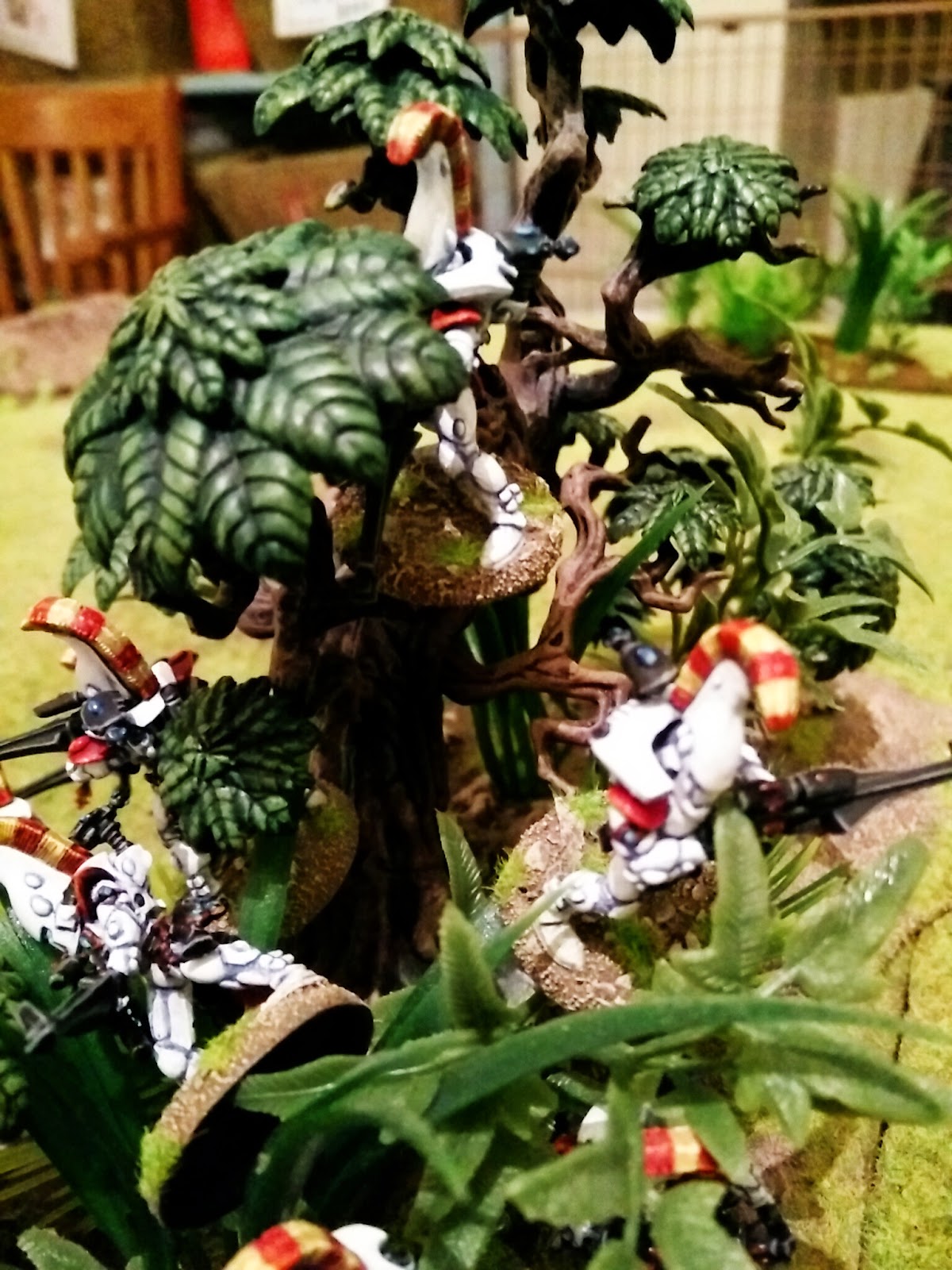 The FireDragons also disembark, I think there was some shooting on the Warlord Flyrant by the Wave Serpents but he managed to live through it. Jetbikes rallied on the far right and the other Jetbikes swooped over the heads of my thwarted gaunts to gain another objective. 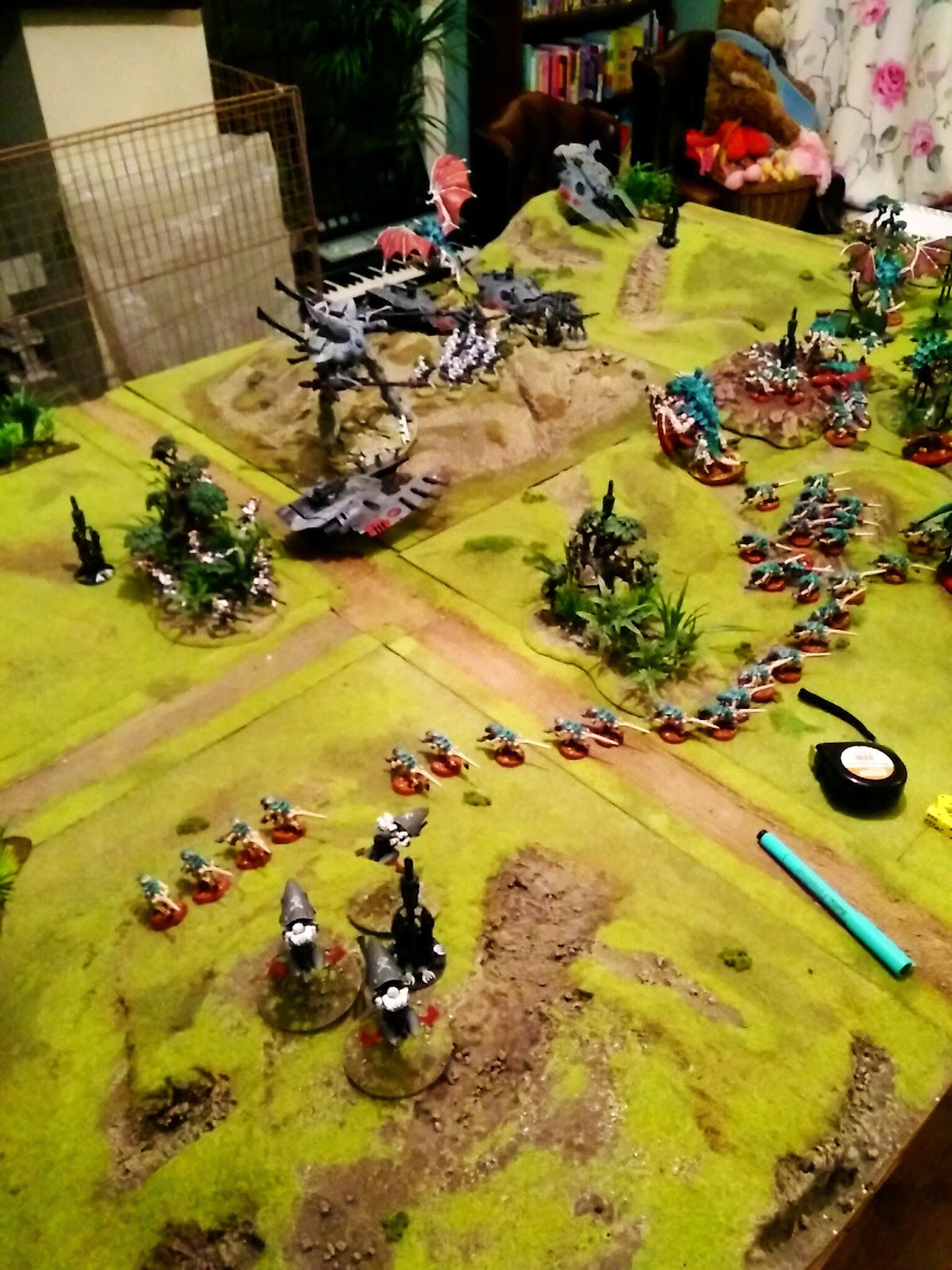 Fire Dragons and Wraith Guard target the Carnifex Brood killing one and wounding the other. 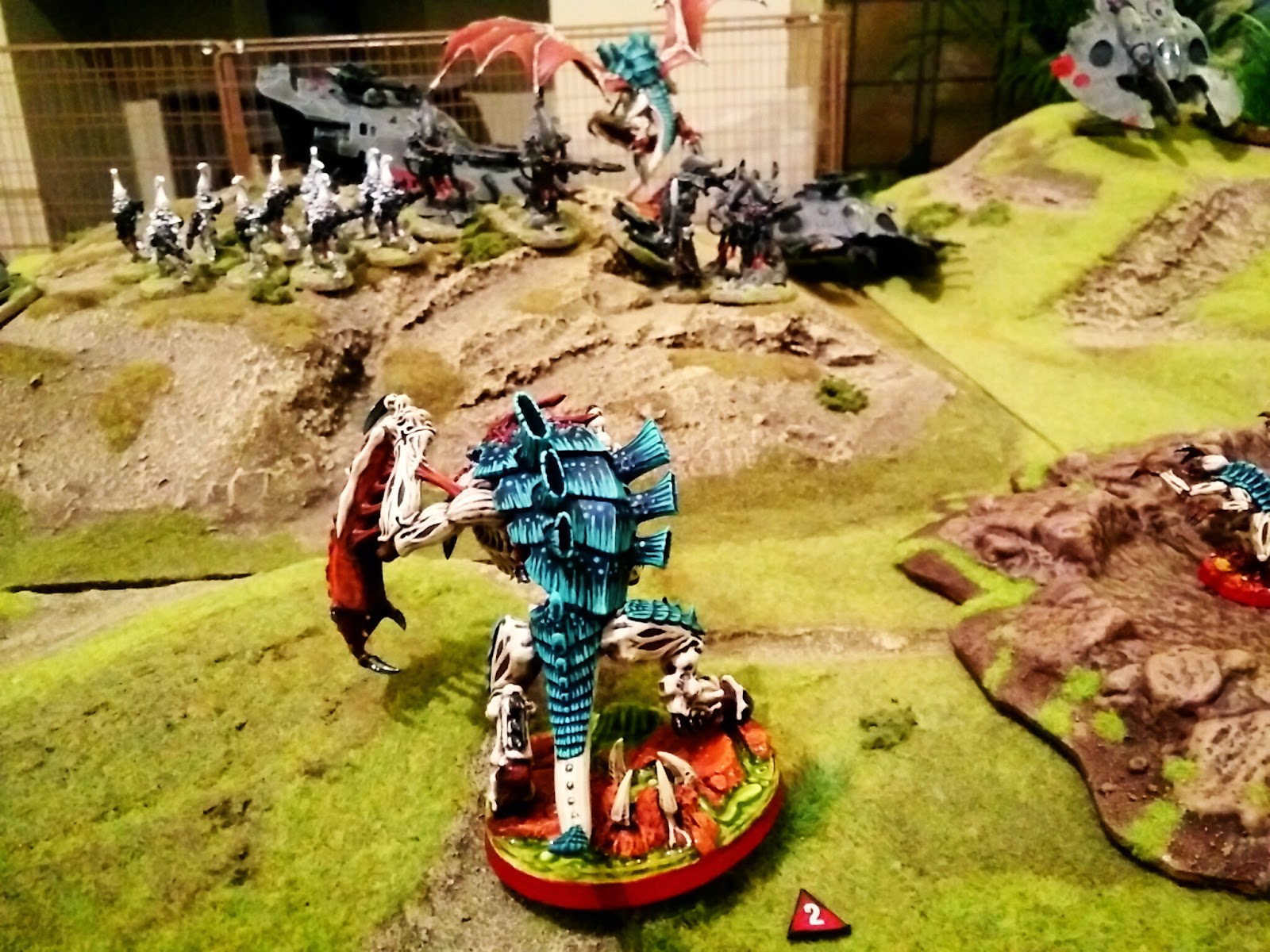 His last two wounds were taken so I was a bit disappointed my 300pts of dakkafex had gone in two turns. Still serves, me right for not supporting them with the Malanthrope, will learn next time. This gets Otty a VP for destroying a unit in the shooting phase. The Wraithknight trys to kill something and misses, again! 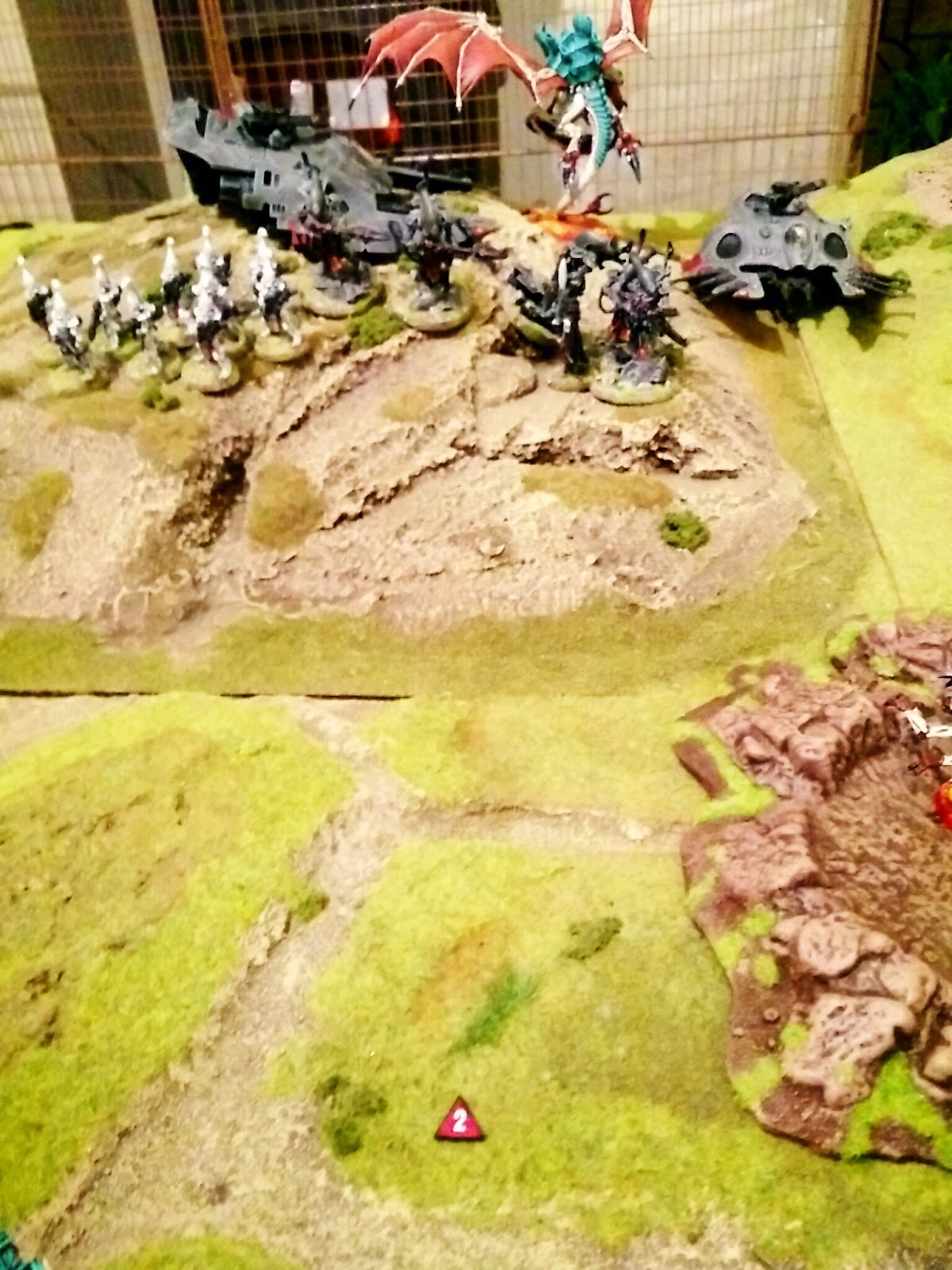 My turn 2 and I manage to charge the Seer. The Spawn challenges but whiffs badly. The remaining Stealers also attack but not all get into range, I think I managed to wound once which Otty would subsequently heal in a psychic phase. The melee ends in a stalemate somehow - 5 Stealers and a Broodlord against a Seer! 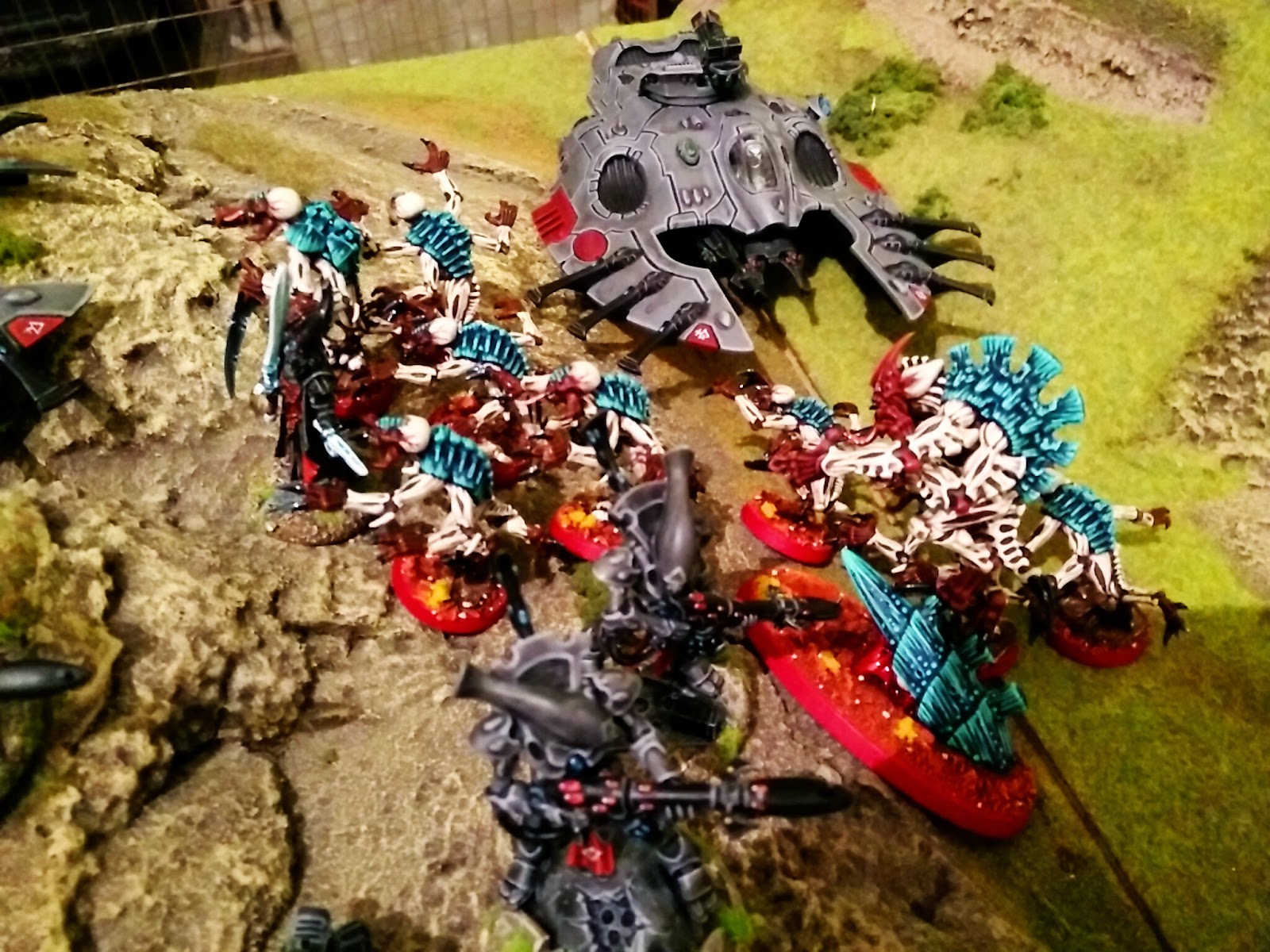 The Hive Guard move up to secure objective one, my new Tactical Objective card. The Tervigon heads to the Wraithknight, the Miasma cannon missing for the second time in the game. Out of shot on the right Flyrant manages to kill just one Jetbike with it's 12 Brainleach shots whereas the Termagants are far more effective with 9 Fleshborers in range on my left flank and kill two jetbikes! 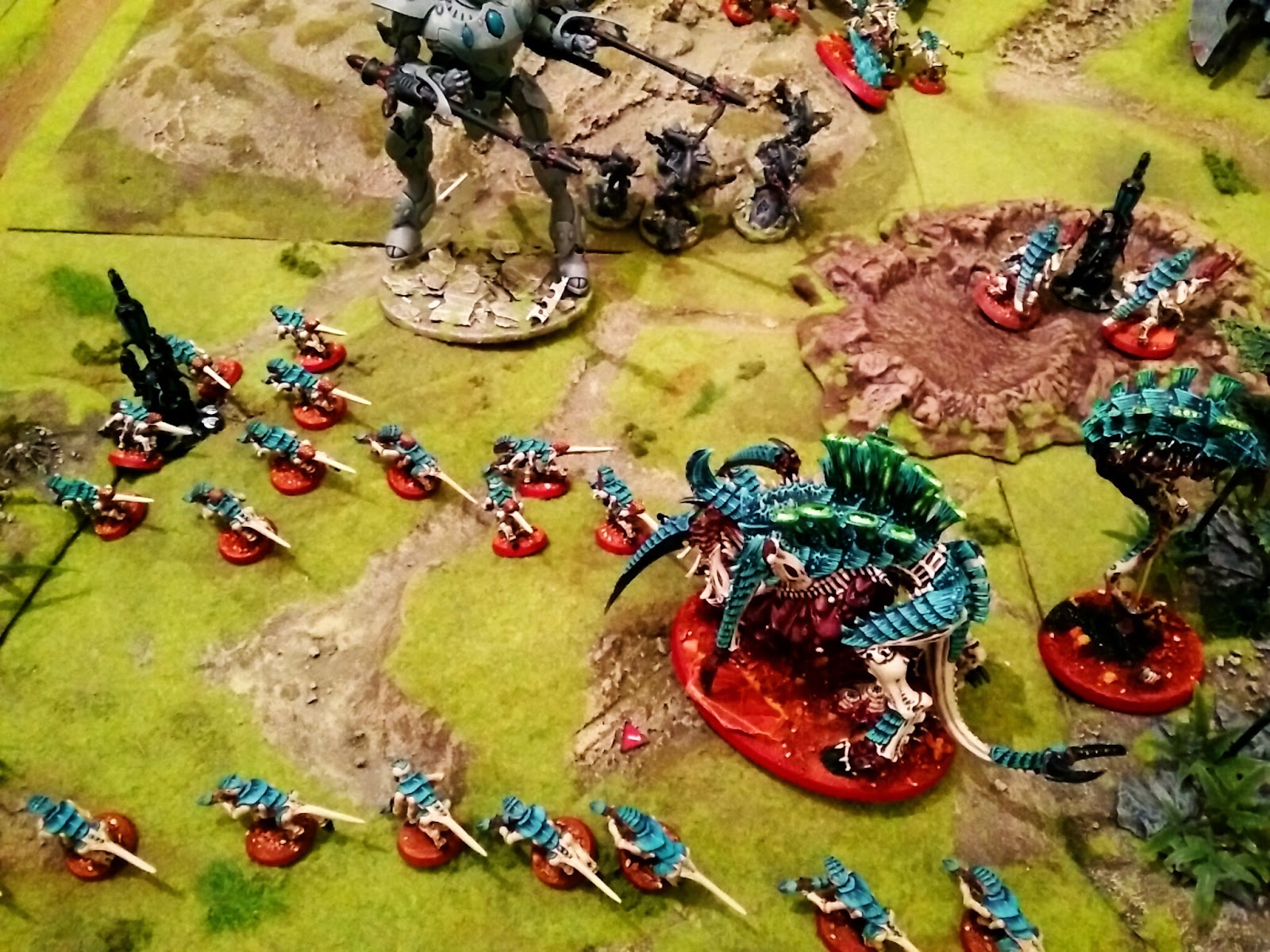 In Otty's subsequent turn the Wraithguard manage to instakill it with their D weapons. Just before this I realise I didn't spawn any gaunts, which is usually the bad omen that the Tervigon's demise is imminent. 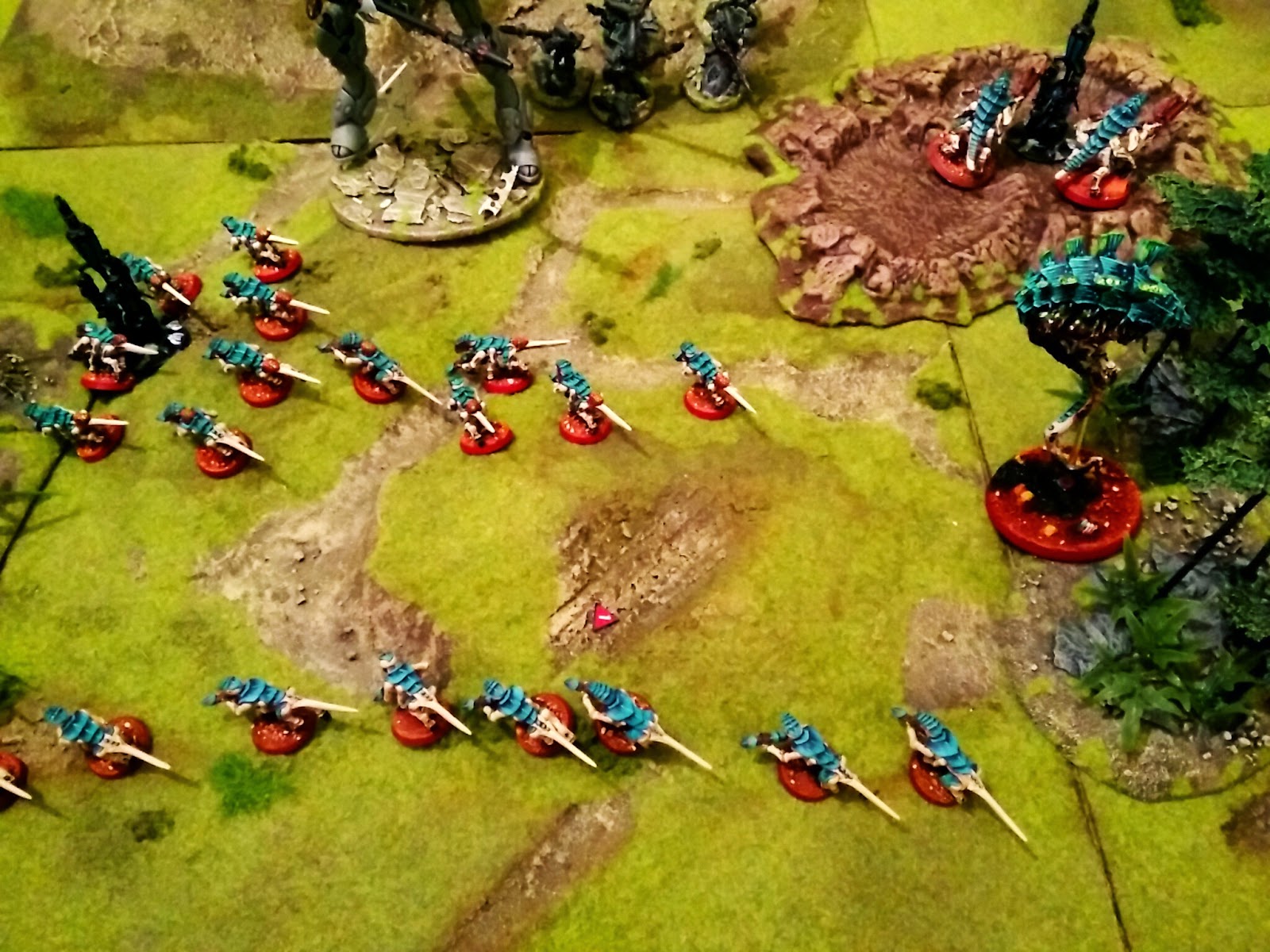 The resulting backlash kills all but four of the spawned gaunts who are no longer in synapse and bolt for the board edge. The big blob of gaunts only suffer 4 or 5 casualties but remain firm under the baleful gaze of the Malanthrope. 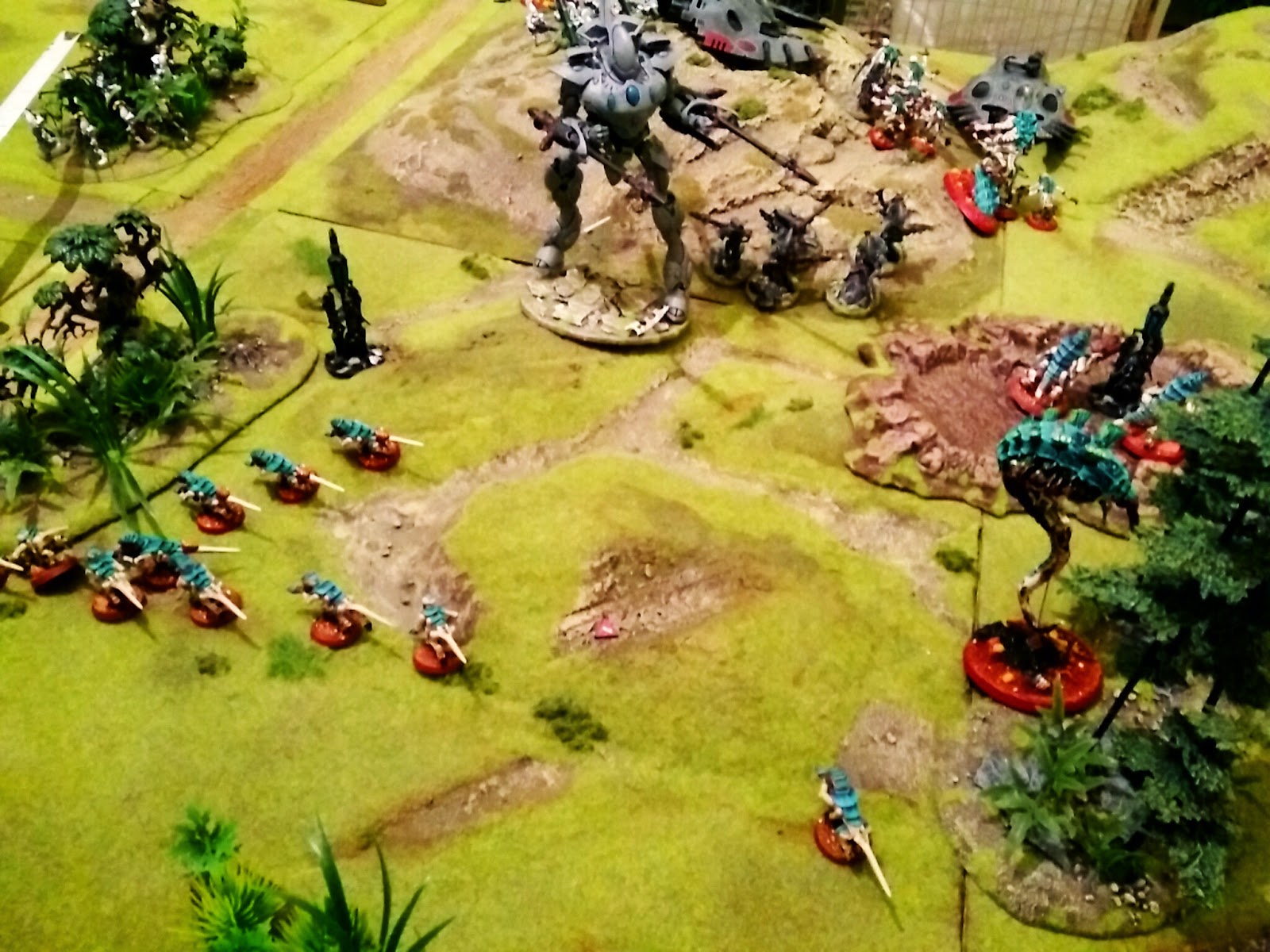 The Fire Dragons focus on the Warlord Flyrant, he is wounded 4 times by their melta fire. Luckily Jink manages to dodge three of them and I'd managed to cast Catalyst in my turn and this was the resulting FnP roll :) Otty was nearly chewing on the board at this stage, my Flyrant was nigh unstoppable. 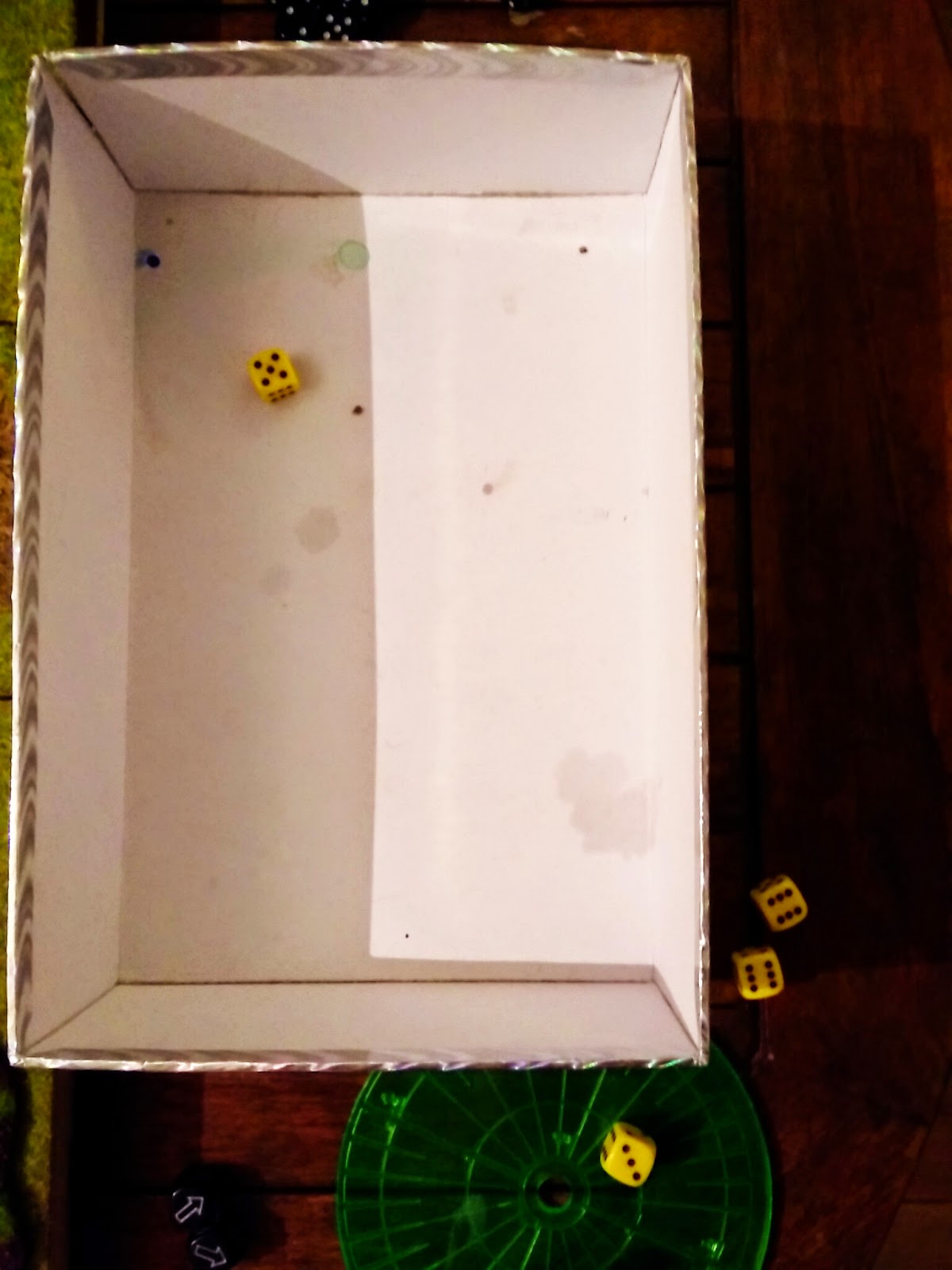 With the Malathrope proving to be a pain in the a$$ it was targeted and suffered two wounds, which he'd later regenerate one. 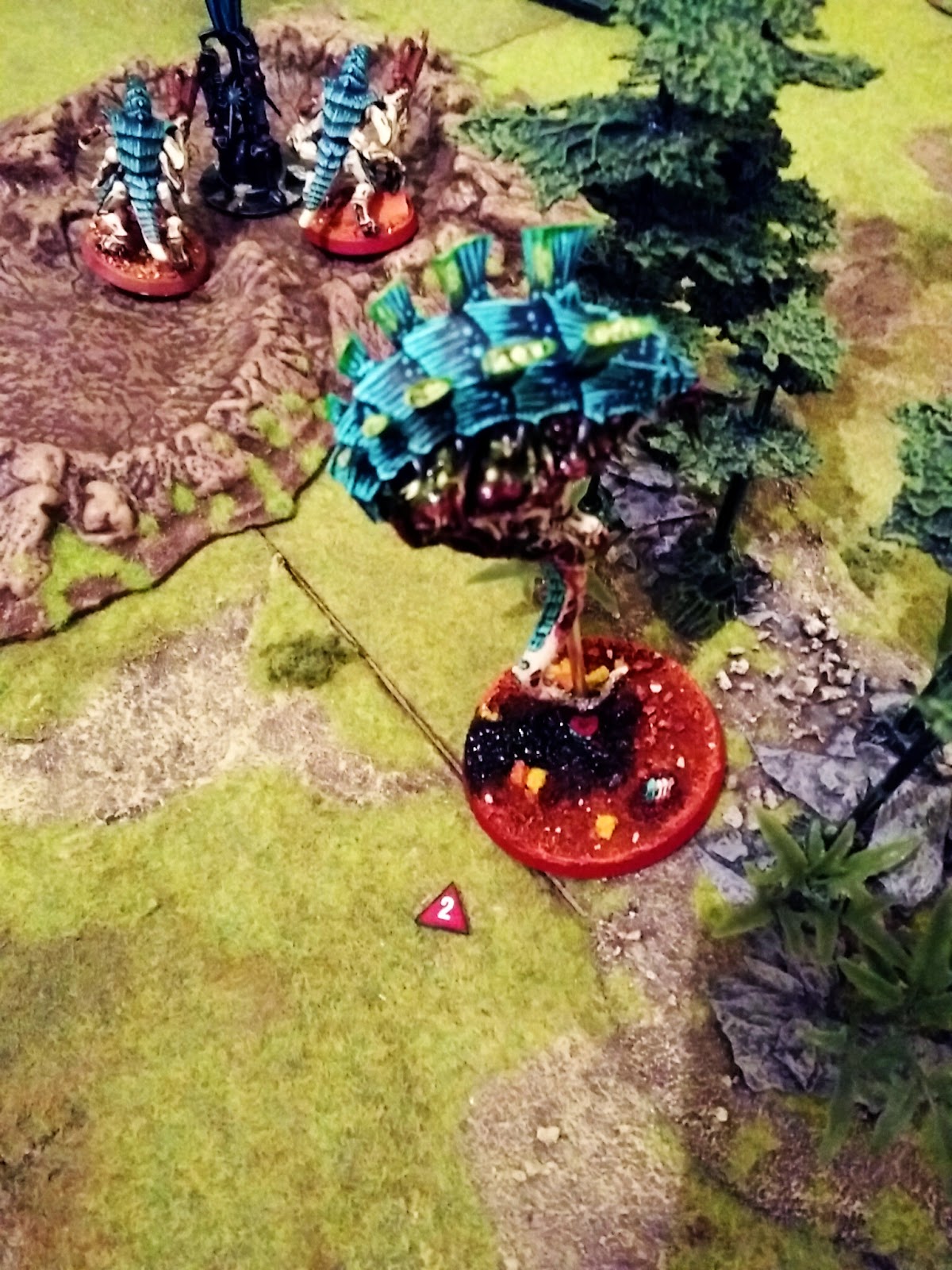 Sweet justice the Seer falls to the overwhelming numbers of Genestealers, I get Slay the Warlord and 3 three VPs for having the Kingslayer objective. This puts me on 6 VPs to Otty's 2. There was however a point where Otty had objective two cards, one was D3 VPs if you control at least two objective and at least twice as many as I did. He also had D3+3 if he controlled every objective. I pointed out it was possible for him to get all 6, he just needs to kill the Hive Guard, unfortunately he can only kill one of them, but he manages to have twice as many as I do and gets 4 VPs in one turn taking us to 6 all. 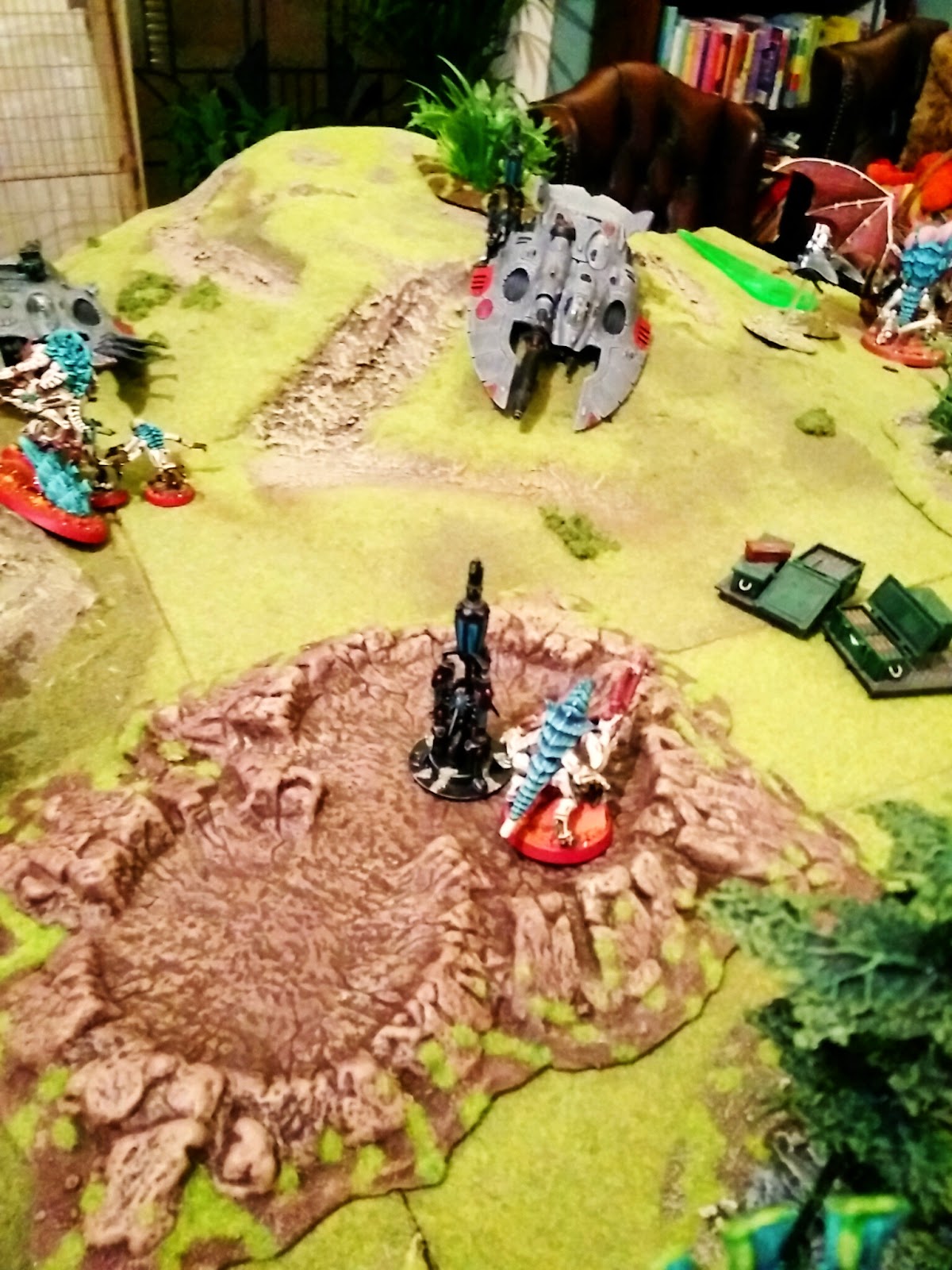 The Stealers assault the Wraithguard but bad luck loses the Spawn of Cryptus, I'm not sure if it was overwatch but he was instakilled. However, the stealers tear through the Wraithguard and look for more of their tasty wraith constucts... 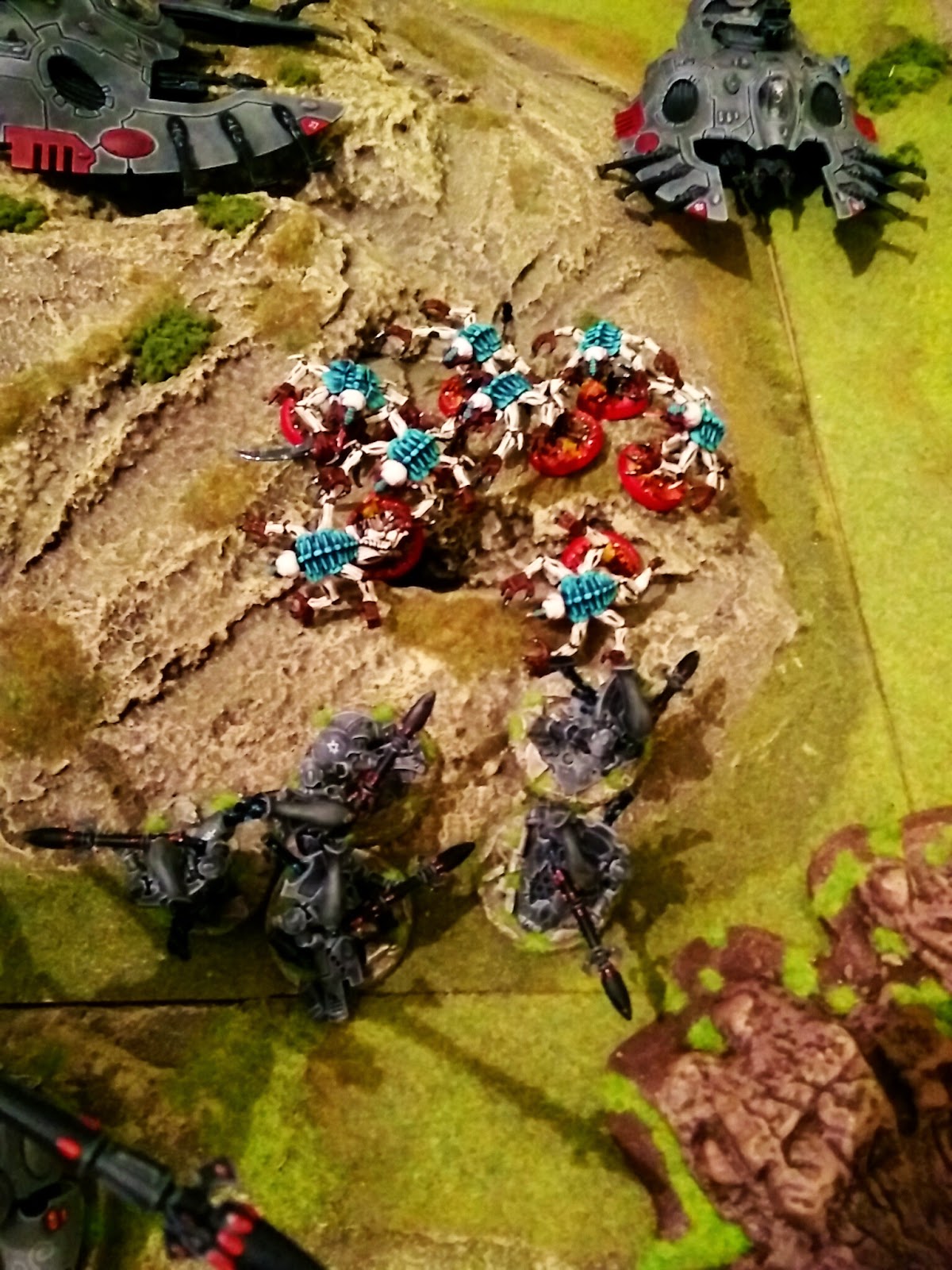 The Malanthrope charges through the crater, to engage the Wraithknight, it overwatches and hits, but I make my cover save from the crater. This allows the stealers to charge through the crater and attack the knight first because it's already engaged. I do my maths wrong and roll 24 dice to hit [instead of 32], eventually causing 4 wounds. With the Malanthrope still to assault the knight squishes it flat instakilling it as S10. we remain locked in combat. I manage to get on over to objective four killing the last of the jetbikes. If I land next turn I can get a VP from it. However the last remaining Wave Serpent would contest  The other flyrant swoops on the back field for Line Breaker 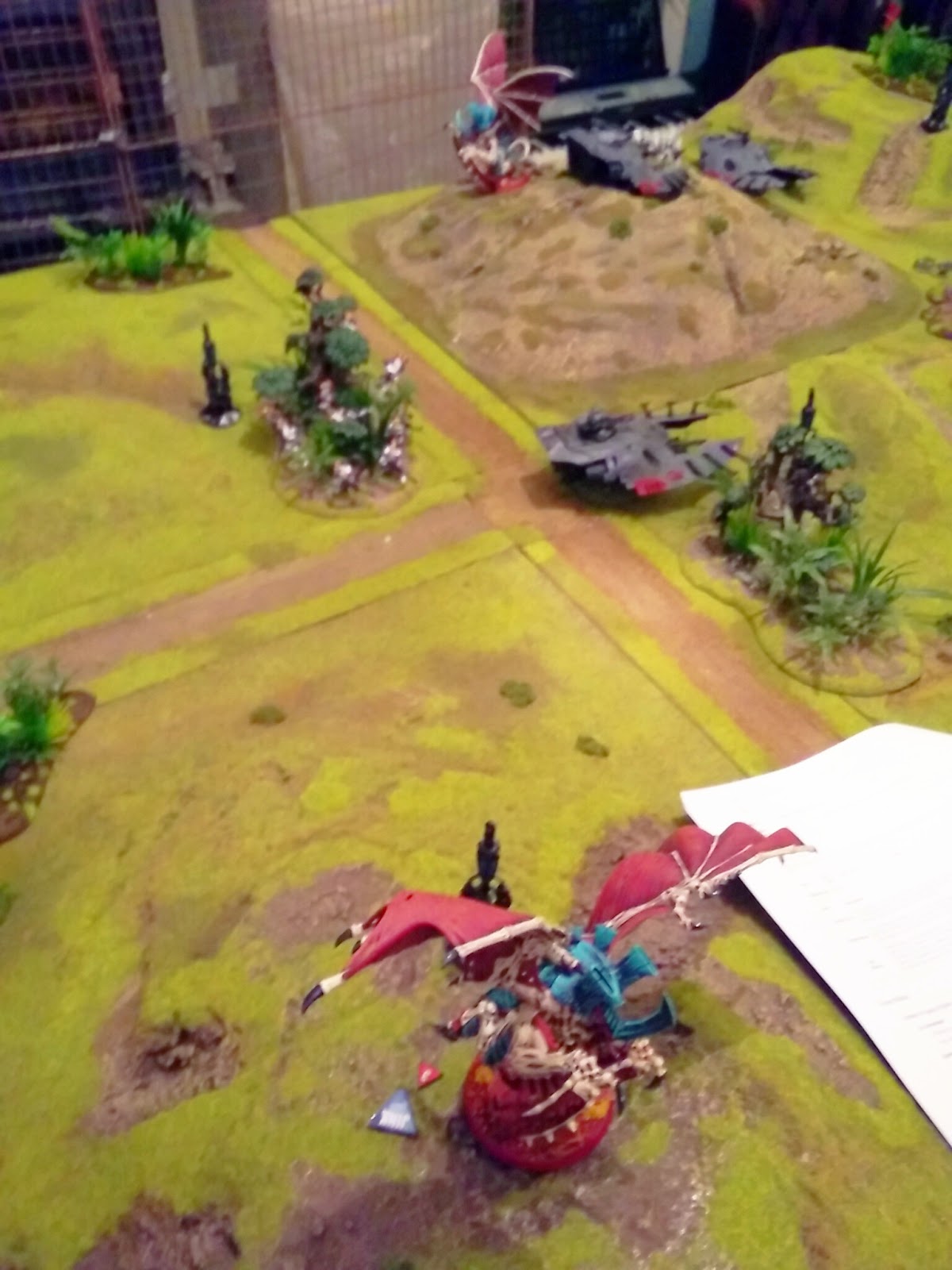 The stealers making their second attack doing 24 attacks, scytals make the difference, if only I could have had toxins on these too! The Wraithknight gets slaughtered but it's too little too late. The Wave Serpent on the objective with my Flyrant means I cant score. I've failed to do more than 1 Hull Point with my Devourers, electroshock could give me one, or I could Vector Strike for 1 but the remaining two might be jinked. Even then I'll be either on the ground in front of it at AV12 so I can have the objective or swooping over it, lose the objective but get AV10 rear shots. Either way I can't get it. 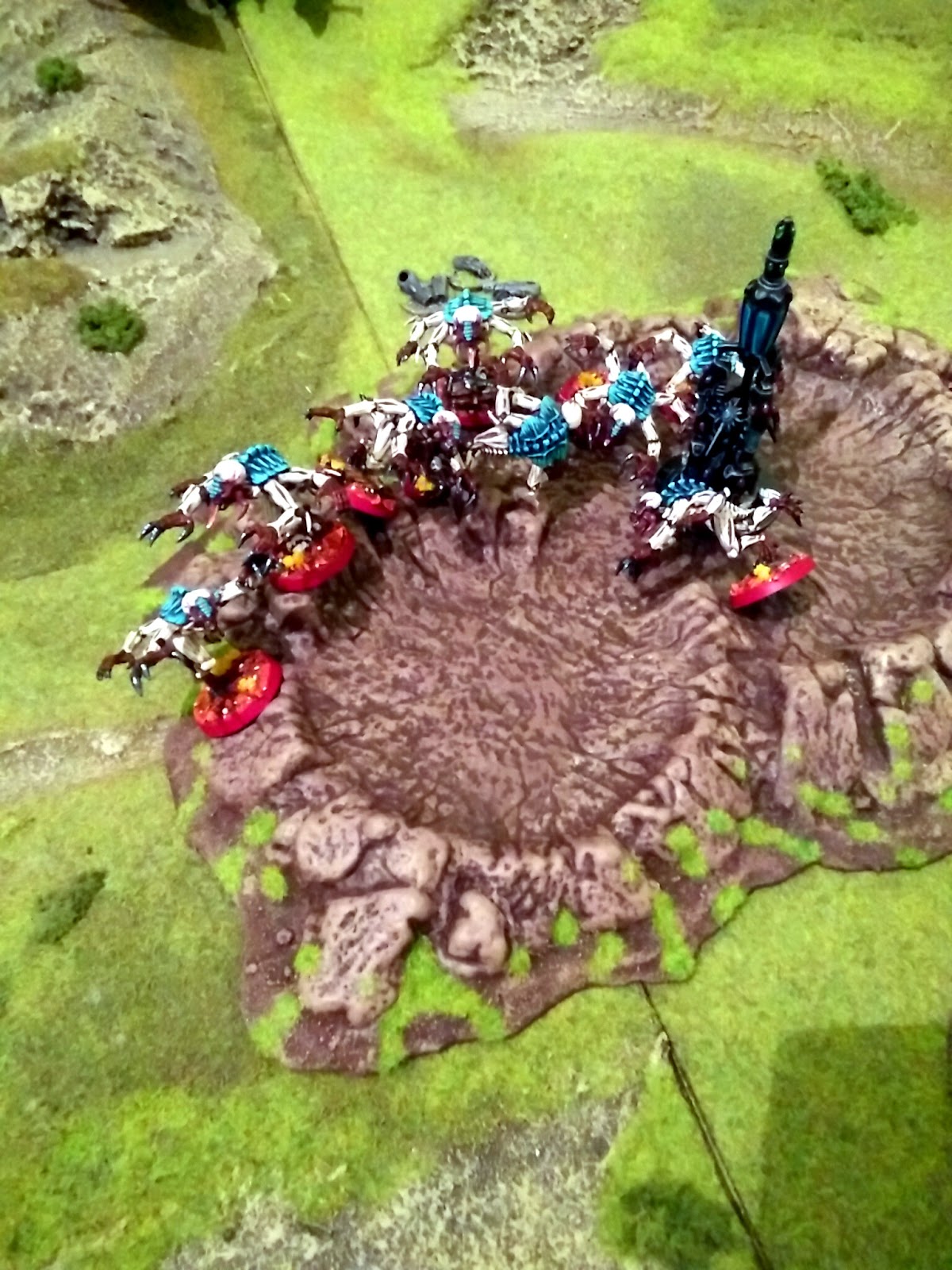 It's 1:10 am, the remaining bike on my right flank has got Line Breaker [I knew at the beginning I should have got them but it wasn't for want of trying] with that extra VP Otty is on 8 to my 7 and I can't see a solution so I call it, we're on my turn 5 and I'm happier to call it than struggle on until the wee hours. I still have to pack up and drive home. This was so much fun though, we had a right laugh, the game pitched on it's head and we both had some dodgy dice rolls and seriously under-performing units which added to the fun. Stand out points were
I was seriously lacking in options due to not controlling objectives, I played far more aggressively, the exact opposite of my last lessons learned, and although I was a bit disappointed [I'm looking at you Carnifices] I had a lot of fun with it. Can't wait for our next game.

Here's the promised shots of Ottys table without models on. 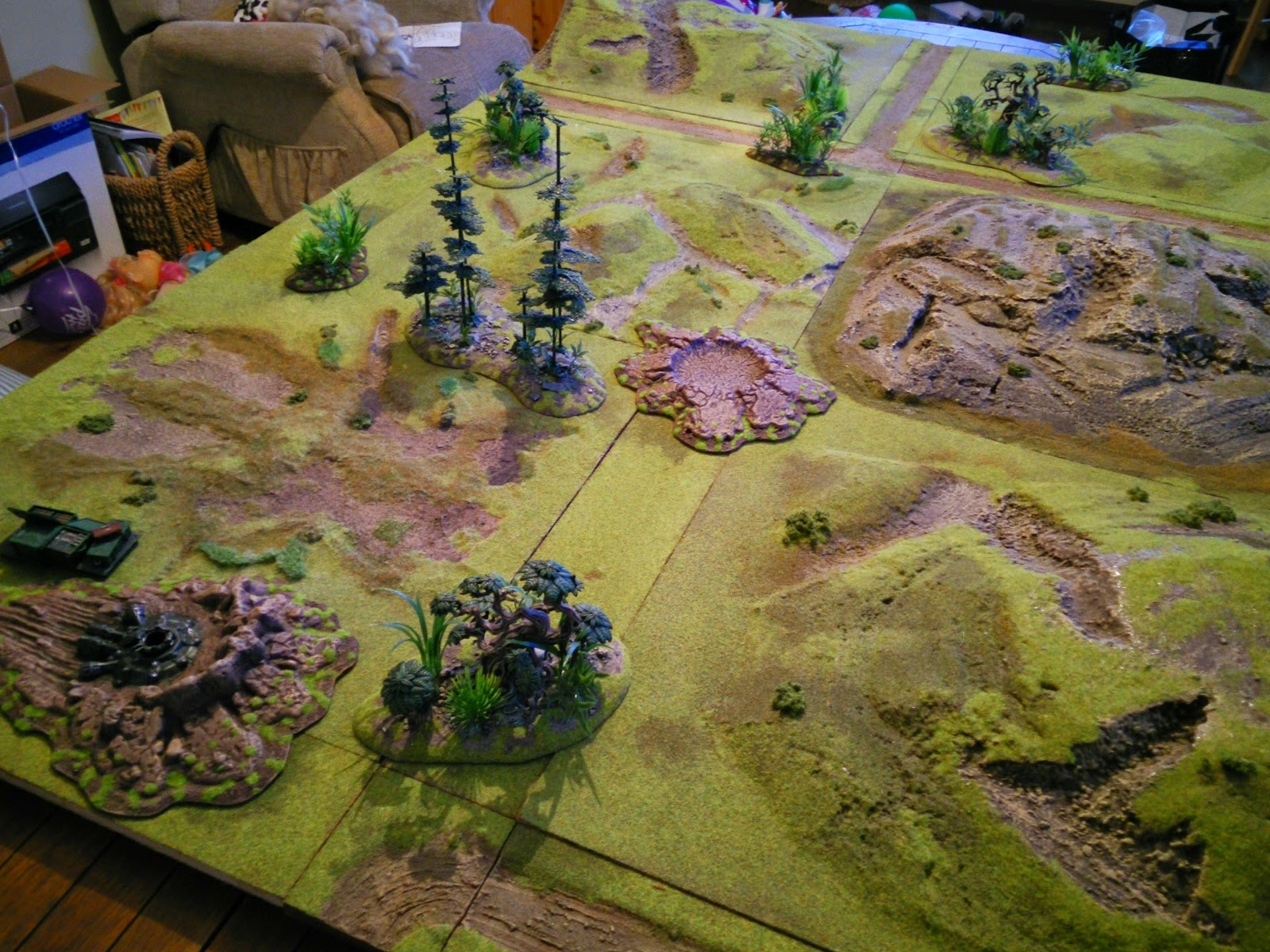 Each board piece is 20" square with sections that are 4", either plain or as roads and you can position them how you wish to make varied layouts. 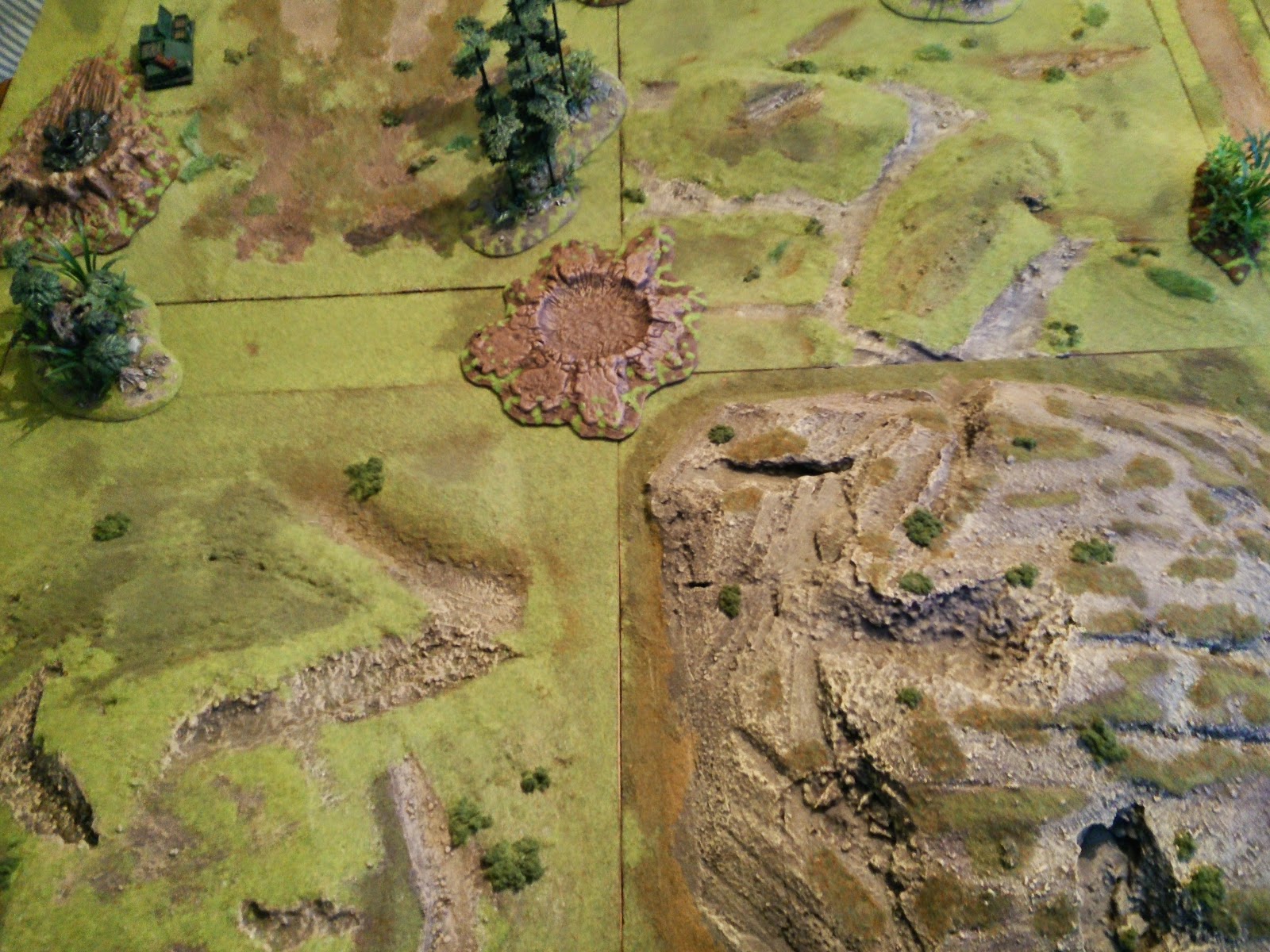 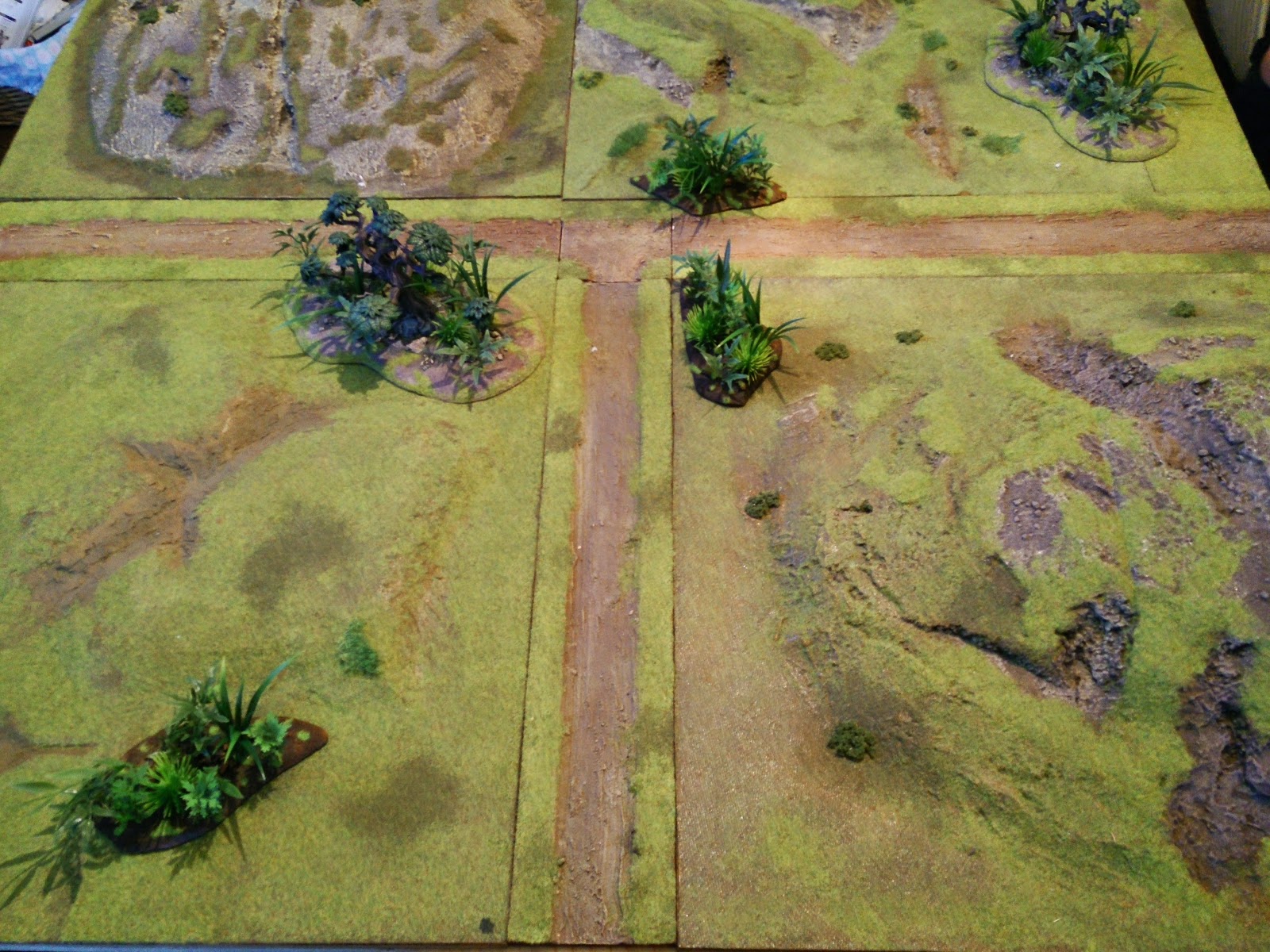 It was nice to play on such an interesting boars, although wobbly model syndrome was prevalent. 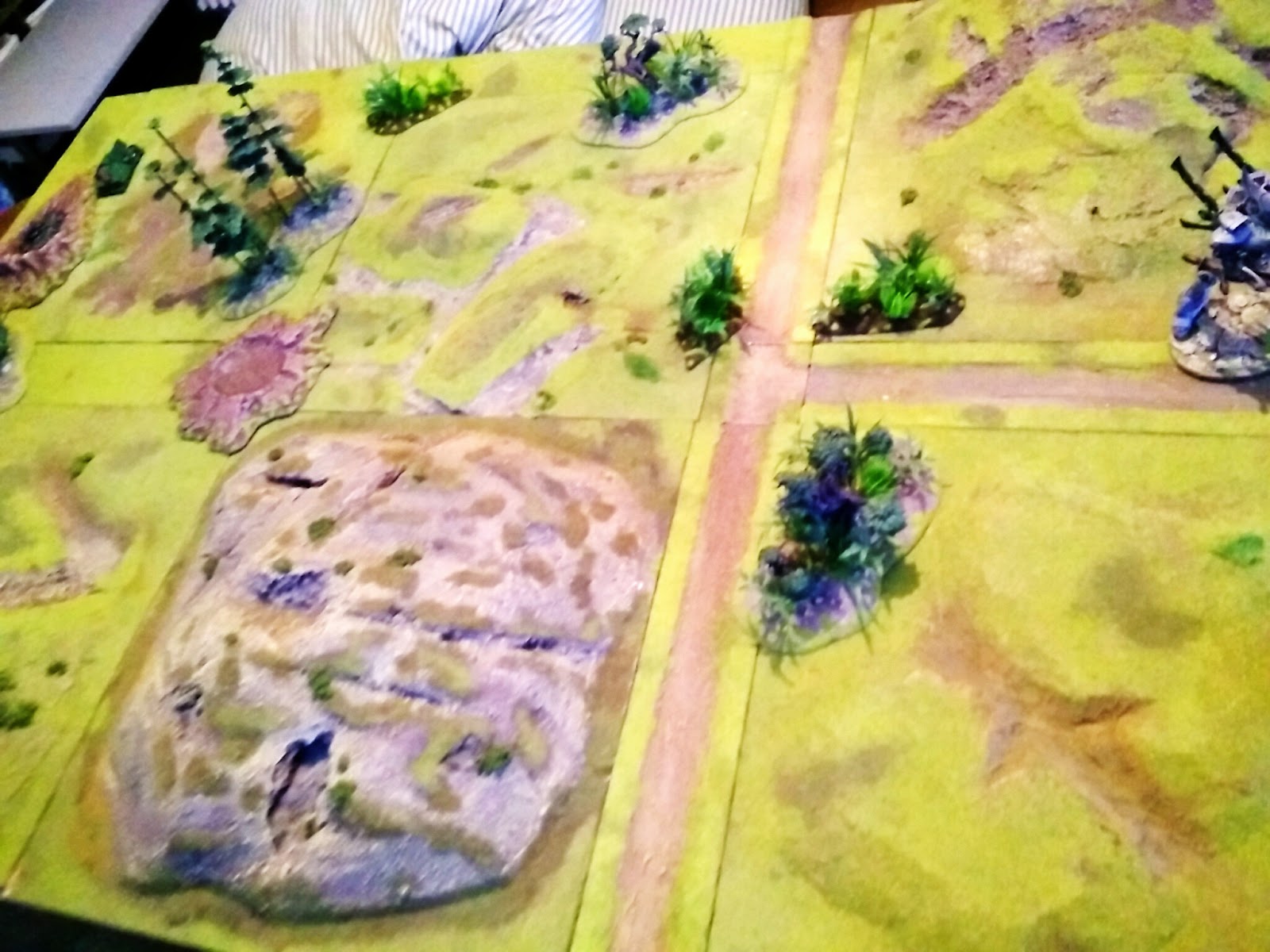 Hope you enjoyed the pics. 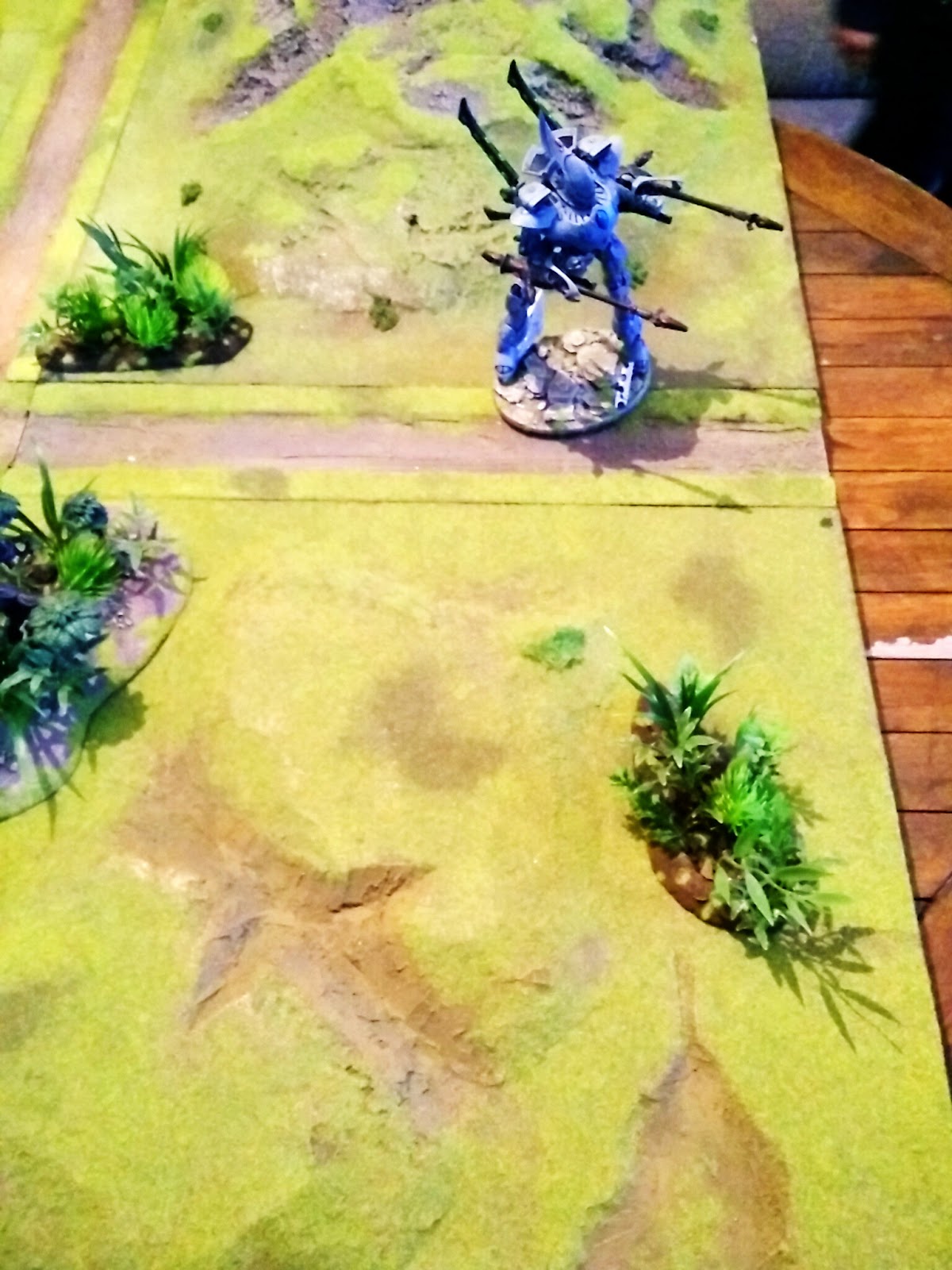