Terrain is everything - Ferron Fire Firs

My last update on these was April 2018. They've essentially sat in a box untouched until now. Other projects take priority and terrain often falls by the wayside. Frustratingly not a lot needed doing to complete them - the Red Planet BASE! and some additional highlights on some of the trees for variety. 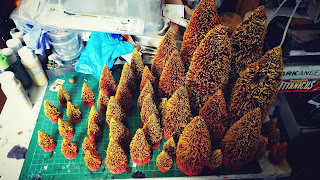 I did my Red Planet BASE! highlights, I also did all the Genestealer Aberrants, Hive Guard, Rippers, Termagants, Tyranid Warrior and Redemptor Dreadnought while I was at it - you see that's the advantage of the Big Build programme, it allows you to get them ready for basing. 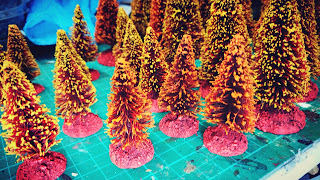 I then did the extra highlights of the mid-yellow [lemon] and then threw on some white for super hot streaks of combustion. Hopefully they'll fit in with the other set I've done previously, although the very reason for the extra highlights is variety so not sure how 'fitting in' is supposed to manifest itself as I've expressly painted them different... Wraithbone chips next and then a quick varnish. I actually have once of those cheap spray-can car varnishes so I decided to give it give a go. It seemed the easiest way even if the soft cover makes varnish almost redundant. The red trees are from the first set I bought, where I didn't paint the big trees because I thought they were too big - this was before LoS for Knights was needed, so I'm finishing these off too. 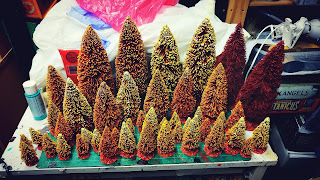 The clear lacquer did alright and the 'bottle brush' feels slightly more substantial know because of it. 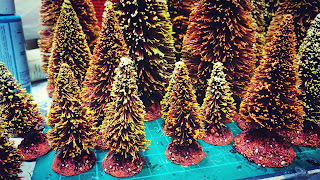 However, it is glossy, which for the trees I actually like.

But for the bases I don't. 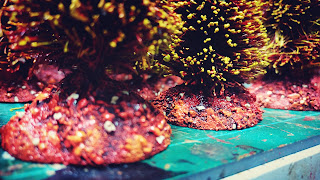 Protection wise I'm satisfied but I'll be painting all the bases with my Winsor & Newton Matt Varnish. Not only will this add more protection where this terrain is prone to damage but also supply the finish I'm after. 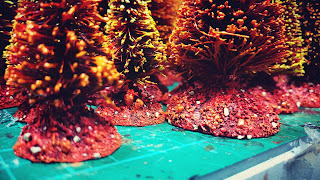 It'll be dull 'drone' work, that I'm not particularly looking forward to but it's just the one last step and I can tick it off my To Do List as a great start to the new season - terrain ✔️, quantity ✔️, long time in production ✔️ 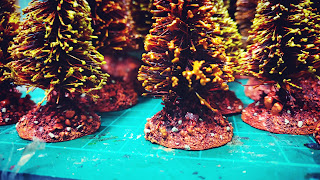 I also picked up a couple of extra art acrylics, so I've got my infra-red spectrum going here. I need another can of clear lacquer to varnish up my first set of trees to the same level of protection but typically Home & Bargain is out of stock. 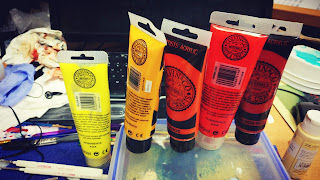