With the Knights complete it's back to Garrek's Reavers and when last we looked at them in December I was unsure about the bases. My conclusion was to just block out the colours and then I might have an idea how to deal with the 'sand'. And so now you can see what my concept is... 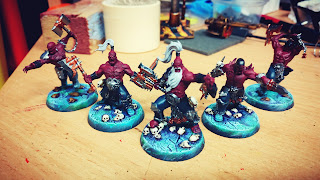 Yep, they're all red. Given it's Khorne I just wanted them to be red-skinned, which obviously makes their armour and clothes an issue as usually they're the red things. However, a quick view of RobPaintsModels video helped me to just use Incubi Darkness on the fabrics, while the armour was always going to be glossy black. 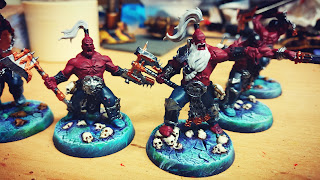 I added copper in places just for something different instead of my bronze and silver as all the pointy sharp bits. 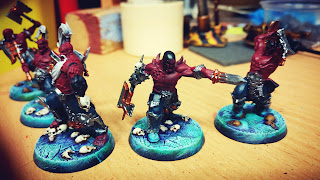 All the skulls got picked out, although there were some jawbones I missed - watch out for those. The realisation was then NOT to do anything with the 'sand'. I'll be making the grand glossy, like it's Shadeglass and the sandy areas will remain that colour just matt. Adding in another patch of colour would have just been more distracting. 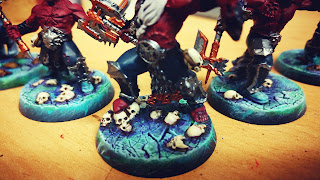 After a purple wash to shade all the red skintones [and to tie it into the other purples on the base] I then highlighted all the skin with Khorne Red and then Valejo Bloody Red. I also threw in some purple wash on his hair, again to connect everything together.

This guy has just had his face highlighted with Khorne Red + Bloody Red. The rest of his body is just at the Khorne Red stage, which looks pretty good anyway, I could have stopped here! Strong and Dark Tone washes were applied to all the metallics. 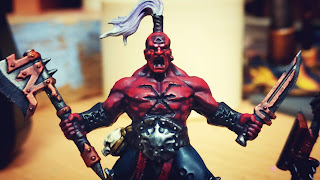 All the Khorne Red highlights are done. 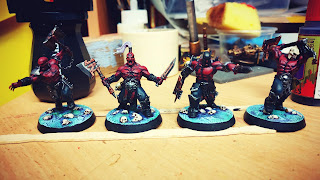 And all the Bloody Red Highlights are done too. 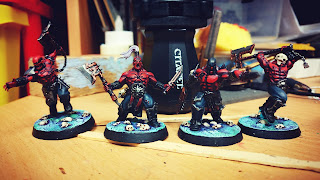 I went back in with more purple wash in places to add greater depth and increase contrast. I picked out some fake musculature too. Eyes were picked out in yellow and some of the teeth were painted in brown - y'know dental hygiene isn't high on their list of priorities. 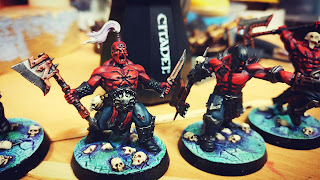 A also did Dark Reaper highlights on all the clothing and picked out the armour plates with Incubi Darkness, but only on the sharpest points. I also did a first black coat on all the base rims. 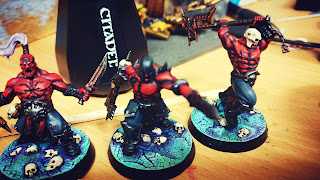 And that's the last of my WiP pics. further highlights and details were picked out, varnishes [matt and gloss] and lashings of Tamiya Clear Red X-27 and you'll see it all when I finally take some TO DONE! pics.