The joys [and benefits] of being a hobby butterfly

Having set out my stall for my next projects and just finished my last Shadespire Warband I actually had a few nights off. With my son's initial treatment complete I'm back working normaly and my boss deservedly took a week off to recuperate from holding the fort. This left me to pick up the slack which was a little more tiring than I thought it'd be thanks to a staff away day to Birmingham and a frantic period producing materials for a road scheme public consultation.


So I spent some nights just going to bed, not necessarily 'early' but without going out to the man-cave. However, I found the motivation and time just to nip out with the intent to add a few small magnets to my Dark Shroud so I could swap out the Heavy Bolter and Assault Cannon. At least that was the plan. Go out, do some cutting and drilling add the 3 magnets job done! Except having cut a notch in the gun mount the gunners arms detached from the body. I glued them back in place but with the time for the poly-cement to set I was otherwise without a task. 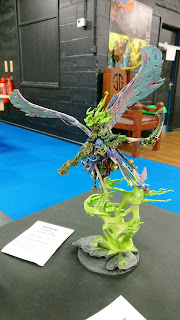 Which left me looking around for something else and I went for my Sanctum Imperialis, it is afterall next on my list. It required some Warplock Bronze on its external 'skirting boards' and buttresses and I'd been actively avoiding it since the last time I applied some bronze over 2 years ago! And herein lies the joy of having a number of projects on the go/lined up. Flitting to this terrain and actually completing something long since consigned to the 'onerous task' lot, brings about a huge sense of completion. Sure, it's just a basecoat and I've another [bigger] piece that needs the same which will no doubt become wearisome, but there's some serious endorphin reward for getting past this hurdle. 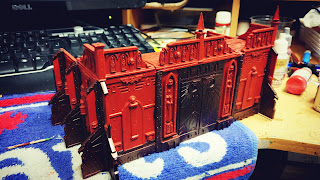