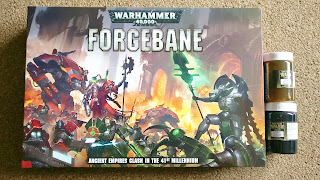 Following on from previous year's spending record I've kept another log for 2018 [and will do so for 2019]. The final figure of £624 was £134 more than last years gross spend of £490. But again I tried to limit my spends as much as possible to Christmas money and vouchers, of which £214 came in. My Google AdSense also matured which prompted the purchase of Forgebane.

On top of that I had quite a number of surplus items I earmarked to sell on ebay to cover my hobby costs. In particular I sold the Necron half of the Forgebane box and some Age of Sigmar Paladins. I also had a bundle of ancient Windows Operating System licences which had sat in the garage for over a decade. In 2006/07 I was buying up all the copies of Win 95/98/NT I could off ebay and reselling them to a local educational software supplier. Most of the time ebay would cancel the auctions due to OEM restrictions and I'd pick them up from the seller, I managed to dispose of nearly £5,000 worth of software until my buyer went bust and these licences were all that's left. Still £87+ for the hobby fund wasn't too shabby

So my net spend of £173 over 12 months is £200 less than last year! Most of my outgoings were on tournaments, but match up to last year in that I paid for my GT3 heat and the North West Open while this year it's my GT3 hotel and next years GT4 heat, although I'll probably get a refund on GT4 as I'm no longer attending. More importantly my figure purchases are down. The Ravenwing bits/Land Speeder and Mechanicum half of Forgebane are the only things I added... OK two Knights and some Shadespire warbands too. But with the Warglaives painted at least some of the things I bought were put to good use and not just straight into the grey tide.

I've still got a few things to sell on ebay next year [those Warhammer Conquest Calsius models...] but with my hobby focus on these purchases and limited expectation in going to any more tournaments than the LCO I'm not sure what I'll be buying in 2019 - Chapter Approved but not much else planned...