There are a couple of tools out there at the moment for making your own power cables/tentacles out of green stuff. Green Stuff Industries Tentacle Maker and Masq-Mini's tube Tool being two of the more well known offerings. However, what happens if you just have a quick need to make some tentacles and can't wait for either of these two 'fit for purpose' devices. Well I'm not sure which blog I read where they casually mentioned a fairly common-place alternative but here's what  I did when I got all squid-like for some Ymgarls.

First up I rolled out a tube of Milliput [again I'm using what I have to hand here and green stuff, surprisingly, is still not something I've invested in]. I used an old phonecard [who remembers them] as a roller, later on I put a few drops of water on the cutting mat so the Milliput didn't stick. 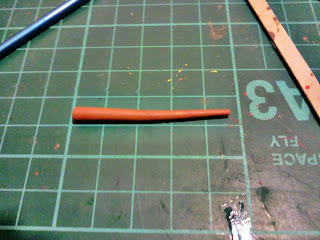 Here's the tentacle maker - a common or garden comb. Being follicly challenged this is my sons. You will note the tool comes with two gauges, particularly useful in illustrating how the ridges get wider as the tentacle gets fatter towards the base. 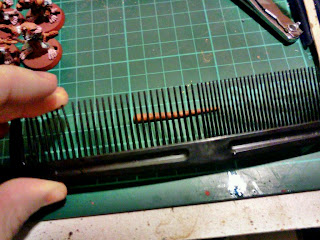 OK, these aren't the best examples I did, but they were first attempts. Adding the drops of water helped with definition. 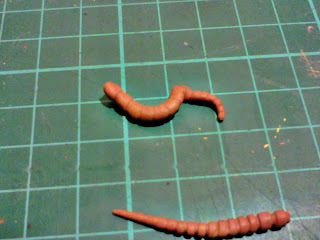 And as you can see they got a bit better because of it. You have to be quite careful though that the pressure of the comb doesn't ended up amputating the lower, thinner tips of the tentacle. 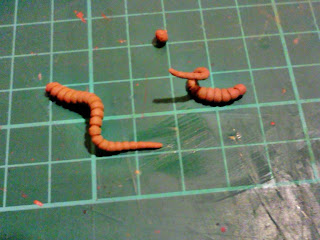 I doubled and tripled up some tentacles for the Ymgarls, pictures to follow. I then added a piece of wire so I could pin it to the Stealer armpits. This may have slightly smudged the ridges but overall it was a good effort. 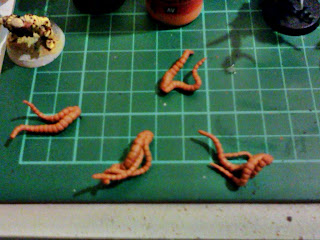 One other point of note was that the Milliput wasn't drying out quite quick enough for my likeing so I rested them on a radiator, which in fact made them wilt a bit, like you'd put a dough in the oven. Eventually after some curing I returned them to the radiator and they dried out in the same curved positions I had intended.

﻿Alternatively check out Eye of Errors awesome tutorial on making octopus tentacles, I wish mine had the wire core in now, I seriously doubt the tentacles are durable enough, but we'll see...
Posted by 40kaddict at 12:26