Afternoon #WarHamFam and #WarhammerCommunity having finished my Ravenwing I somehow thought I should do more Ravenwing! So I've been converting my own Sammael on Jetbike out of a Custodes Jetbike, using Chamber42's awesome tutorial. I managed to pick up a Dawneagle jetbike for just £12.60 on ebay and I had most of the other parts to make a basic upgrade but I went all out bling and got a Ravenwing Command Squad sprue for £18. Now, that may put this at £30.60, not much different than the official model, so why bother? The Command Squad sprue comes with another Black Knight bike, Plasma Talons, Grenade Launcher, two Corvus Hammers and various other bits. Should I get just a cheap bike or two I could have another two or three Black Knights for very little, as well as Sammael. So, it's cost effective in the end. 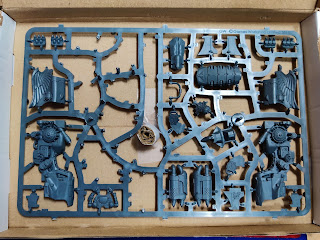 As this is the Plasma Cannon rather than the Assault Cannons of the Talonmaster conversion I decided not to do an underslung Cannon and instead have it mounted in the chassis similar to a Scimitar pattern Heresy Jetbike. I went looking for the Forgeworld link for these when I started writing this post and couldn't find them, a couple of days later they're announced in plastic!

The Plasma Cannon is from the Deathwing Terminator Command sprue, so could have been underslung with ease but I wanted a more streamlined profile, so a bit of cutting and digging was needed to fit this in.

Here's the underneath where I had to remove the front bit of the central piece to fit the cannon.

I have a small metal ruler that I aligned with the three grav nodes to score along the base. I cut out most of it, but you can still see the score marks and the piece with a central node I glued back in to close the gap. It's pretty messy so I've got to clean it up yet.

I don't know if you could have just cut the small piece out that needs to be removed to fit the Plasma Cannon, without taking the piece I returned but it might be worth trying.

Mold lines need cleaning. You can also see that the bottom part, where it joins the 45º lower left gun cowling has started to separate. Not sure why but it'll be fixed. Fitting the Storm Bolter in the gun cowl will be a challenge. It comes as a Hurricane Bolter [3 guns] I can remove one which will make it a Storm Bolter and allow it to fit better because the Cannon currently resides where that third lower gun sits. There's some fettling to do that's for sure.

I've got my rider and extra bits to try and fit in the next update but that's in the post...
Posted by 40kaddict at 13:09