Afternoon #warmongers and #warhammercommunity it's #ArmiesOnParade andafter COVID scuppered last year's attempt to Parade in store at my nearest Warhammer in Liverpool I was desperate to get in there this year. I've a lot more pictures from the day of the other entries but this post is my entry. 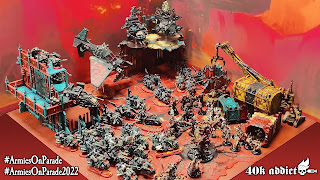 The original plan was to Parade instore and then take pics during the week for the online entry. However, I had done a test layout on the Friday before and the photographs were not great. It took almost an hour to setup and when I was at Warhammer in Liverpool the lighting seemed decent enough to take my pics and it would saving unpacking, setting up and packing them away again at home. I also remembered how much my back suffered in 2021. Following on from the last 2 year's I did another video to showcase, it helps a bit more than the pics alone.
So, you should recall the theme was my Dark Angel Ravenwing  hunting a newly arrived infection of Death Guard and diseased Poxwalkers on Ferron Proxima. 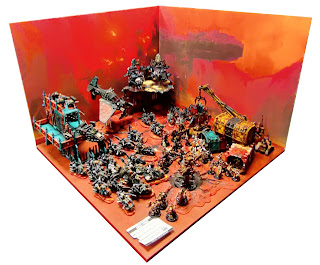 I was much happier with the arrangement after the Friday night test run. 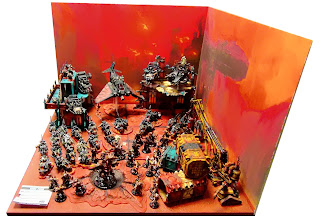 I'd been quite downbeat after those pics, shown at the end of this post. 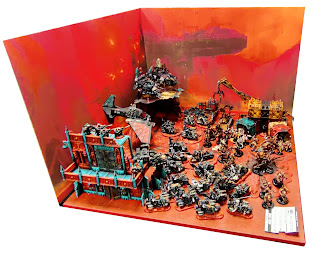 However, these are still lacking some detail, which I think is my own fault for switching my phone camera to wide angle setting. I got a much broader view, but at the expense of detail.

Luckily the video managed to capture a bit more of everything and there will always be my showcase pics here on the blog.

As proud as I am of my Parade I know it is not going to win Armies On Parade and I'm absolutely fine with that, so higher quality pictures is not going to change anything.

My sole purpose is to be part of the event and to showcase my hobby, which was an absolute blast on the day.

The only real annoyance was I had not put my Land Speeders in the test display so did not realise I'd only packed 2 flyer bases, rather than the 4 I needed. It was an inconvenience and I was able to hook them onto my Sanctum Imperialis so they look somewhat levitating.

Unfortunately I think the Death Guard suffer most from the images. So much of the grunginess and slimy details don't show up.

The Ravenwing faired a little better, certainly an improvement over the Friday night pics where everything looked so drab and mediocre. Yes, even with a bright red board and backdrop it just looked boring to me.

Positioning could have been a little better but I was much happier than I expected to be.

This was the best shot of the Poxwalkers and my now obligatory assassin, although next year if I do blood bowl team she may not fit in.

The Administratum building looked awesome but maybe overshadowed by the Talonmaster and Dark Shroud.

And my Attack Bikes.

THE most important thing - my participation pin. As you'll know there is a competitive element but the store had not received anything other than these pins and some gold pins which they gave to the overall, AoS, 40k and Youngblood winners. They mentioned it had been very close and I came 2nd but I don't know if that was just the 40k or overall category. It didn't matter to me as if entrants had been able to vote I would have voted for the ones that did win, certainly in AoS, 40k and Youngbloods. Those entrants will be forthcoming... 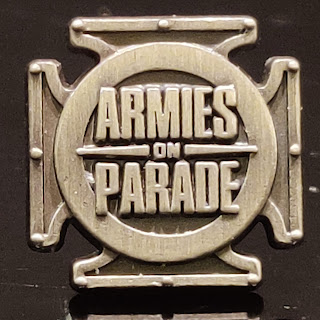 These were the pics I did on the Friday evening, which I wasn't overly happy with but I share with for the record and so you can see why it was better to take pics instore. 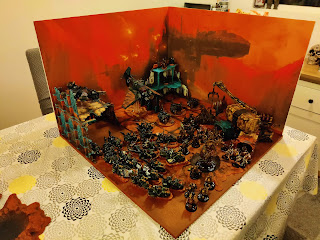 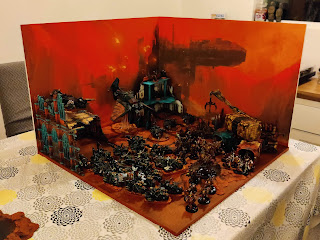 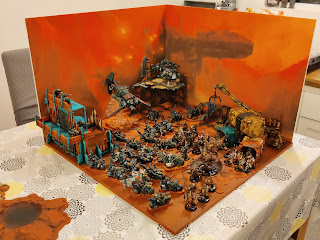 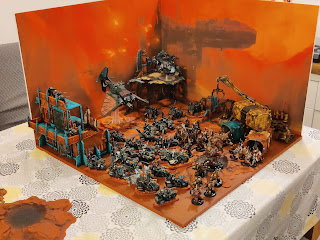