Afternoon #WarHamFam and #WarhammerCommunity I've been #PaintingWarhammer on my #Halfling #BloodBowl team. This has been a labour of love - aside from that Blood Bowl tournament we don't play. I think all my mates have painted up teams but they've never warmed to the game, sadly. 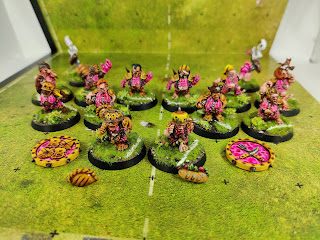 I understand somewhat as it's formulaic. But, compared to the way the goalposts are constantly being shifted in 40k and its overwhelming complexity, something formulaic and dependable should be right up our alley! 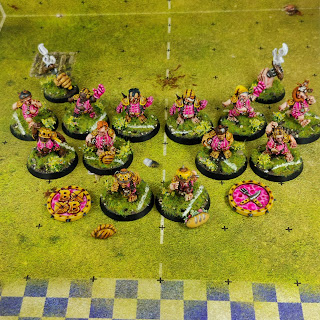 Nevermind, these guys had some flowers and flock added to their bases, alongside the obligatory white pitch markings. 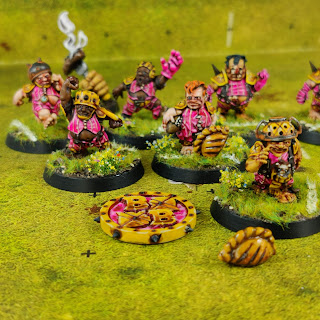 Here you can compare the original test model at the front right with the rest and just notice the slightly lighter pink on his vest. I also used my first Contrast paint on these. Iyanden Yellow was used on the shoulder pads - to add both a glaze and shade on the lower edges. It helped round them out, they were looking a little flat otherwise. 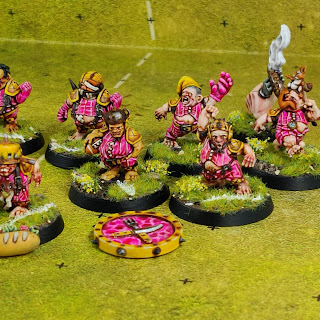 The coins were quite fun to do, particularly the BB logo side. It was almost my first non-metallic metals for me.

The  team logo was fun because of the extra 'ham' than the obverse. I got to play around with the effect with lighter pinks and washes to create some marbling.

I'm so glad I went back into the helmeted Hefty's shoulder pads. I had wanted variety in the crackling markings but diagonals just made the most sense across the lot. Our eyes are predisposed to see straight lines and a vertical/horizontal grid was exposing any flaws. The diagonals here are actually quite varied in their positioning, but thankfully it's harder to notice because it's at an angle.

The Ferret, Weasel and Squirrel were quite daunting and I delayed painting them as long as I could but the end results are much better than I expected. I've seen other hobbyists since, which look almost real, but I'm still happy with these little critter. I do need to make an Akhorne at some point from the spare squirrel head I have.

I also added a little splat of Tamiya Clear Red X-27 blood on t hat Hefty's nose bandage and the knuckles of some of the Hopefuls - like they've just punched someone to a pulp - definitely hopeful, perhaps even wishful!

The pasty came out so well and the flowers add just that little touch of extra detail on the bases.

I do love the helmeted Hefty, I just think the sponge was an element too far. That's the sort of thing you can add on, whereas a plain helmet would have been a little more generic. It would have been nice to have had a second one in this style - my only criticism.

As mentioned previously I've got to get some Kurnoth Hunters to get to make up as Treemen. When I do that I'll take I'll take individual 4 planar shots of each model, so you get to see the full effeorts. There'll be two Treemen in this team and I may save the third for an eventual Wood Elf team - I just love painting these teams. That said, the Orc team is NOT progressing at all.

One day though I'll get over that first orcish obstacle and get that test model complete. But for now I have a small treat for myself before I get back to my Ravenwing

So, here's my Great Big BLESSED VERDIGRIS Stamps of Approval! 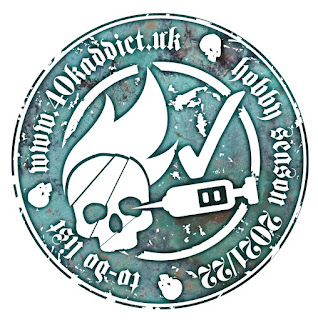