Afternoon #WarHamFam and #WarhammerCommunity I've been #PaintingWarhammer on my #Halfling #BloodBowl team. This is the Porkbelly Stuffers before they go off to their stadium - 'Surf n'Turf Moar'. These are essentially finished, except for adding grass and flowers to the bases [I also picked out some bonewhite stones, as is my signature]. Granted, a huge jump from my last pics but it's been a labour of love and I just kept plugging away, not worrying about pics.

I think everyone should have a go at painting these models, so much character. I know I've been more adventurous and explored quite a bit more skintone techniques than normal.

That said Warhammer Community tweeted a post about sharing your 'Fling teams and the standard was insane. I was perfectly happy with mine but did feel as though I wish I could have pushed them more.

But I know I was already achieving diminishing returns in the effort I was putting in.

However clumsy and 'not quite right' some of my painting achieved there were odd paint strokes, blobs and washes that lifted them to a place I was delighted with.

A strange contradiction, but most of my finished minis hold some element of imperfection I'm willing to overlook.

The marker pieces came out particularly well, which is something I'd avoided for most of the project, for fear of mucking them up.

The sausages in particular are so juicy. My mate Liam says gloss varnish has no place in miniature painting. He says everything can be achieve with highlights, which is true. But, I defy anyone to claim that the gloss varnish on those sausages make them as close to a banger as possible. The steam too was a happy accident, just thinned white paint over the red oxide primer base. Extra coats on the thicker areas - it just works. 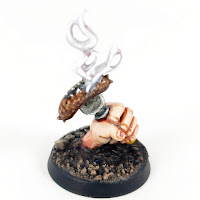 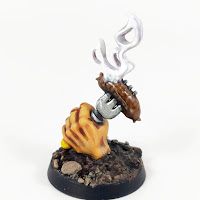 The full team alongside one of the original 2nd Edition players I painted way back in the day.

There are still some elements of the original I couldn't replicate or surpass, but certain newer efforts are so much better. I'd been disappointed at some of the pork cracking slicing I'd started on some of the earlier test models and repainted them all as diamonds. I also chose not to add the cloves in the centres, but darker at the intersections. It's either cloves or shadows.

I had struggled to find any examples of halfling's of colour to add diversity to my team. A little patience and we have Lenny Henry as a hobbit! I didn't quite stretch myself with variations in the skintone around the face, but I liked the definition straight off the brush and didn't want to lose that. 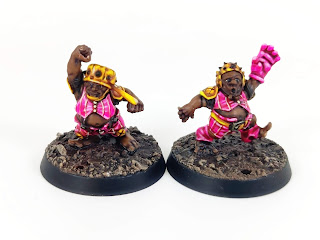 This guy is one of my favourites though - the shaved head was particularly successful, compared to previous efforts. 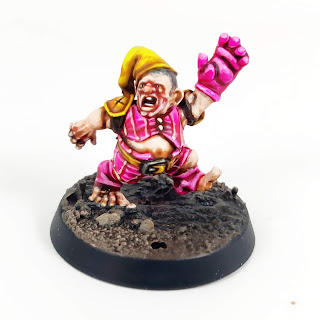 I had intended this one to be full-on Gordon Ramsey, with the blonde hair and everything. But, I ended up doing red hair. Although the pupils don't quite match I was so pleased with the red wash on his face for that flushed/freshly punched effect. 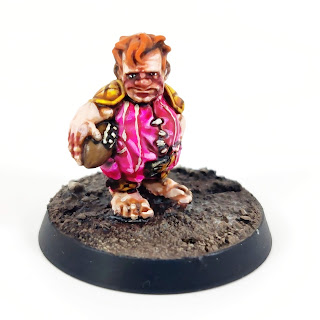 Although, the original test model still rates as one of the best of the bunch- with his navel hair and swollen knuckles. The pink is a little paler than the rest of the team - too much highlighting. But it's not that noticeable as a group. 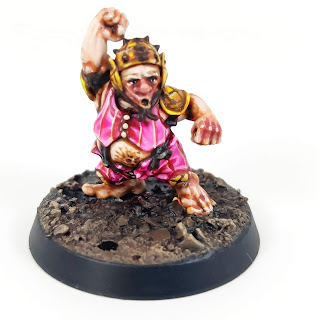 I'll be back with the TO DONE! pics next. There are still some Kurnoth Hunters to buy, build convert and paint to fill out the team. But not for a while yet.
Posted by 40kaddict at 13:10