Afternoon #warmongers and #warhammercommunity it's #ArmiesOnParade and I had a plan to enter a narrative battle board online and hoped to Parade in store at my nearest Warhammer in Liverpool with my Imperial Knights - they were the most convenient to transport. However, that got scuppered as I'm currently blessed by Papa Nurgle with the COVID! Yep after a 2 years hiding in my shed I some how caught the pandemic! Nevermind, we'll stick with my online parade. 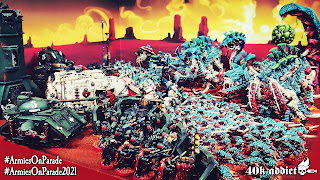 Following on from last year I did another video to showcase, it helps a bit more than the pics alone. However, you may notice a bit of camera shake as it goes on. This was because my back actually started to give way as I was filming. I did try to fix the shake in Premiere, some bits were super smooth, others just looked weird, so I left it raw. Add to that I'd had a migraine flare up thanks to my rubbish spotlights which took away half my vision with flashes in one eye it was quite the photo shoot. I hope you enjoy the vid.
So, the theme was my Dark Angels defending Ferron Proxima against my Tyranids. 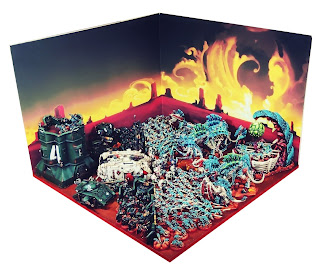 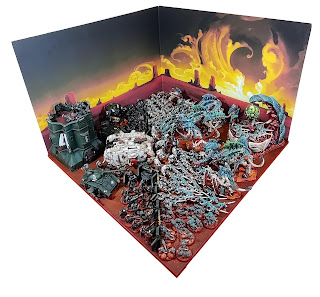 But I wanted to feature some of the newer things I'd completed alongside some of the past stars. This meant my Dark Angels were predominantly Green Wing. 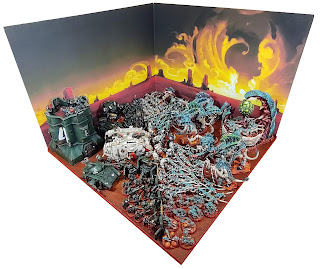 This meant I could showcase all my Tactical squads, including the most recent Macragge Squad. Also my Aegis Defence line, Redemptor Dreadnought and my Rogue Trader era Predator and Razorback.

For the Tyranids I had my scratchbuilt Void Shield Generator, which wasn't initially in scope as I was looking for my Tyrannofex and Tervigon to be the stars, supported by gaunts and Rippers to give that feel of hordes washing over the hasty Imperial defences. 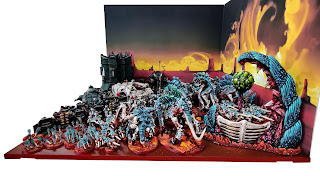 However, the VSG made a nice reflection of the bastion and it was also new and had never been on parade before so it was rude not to include it. 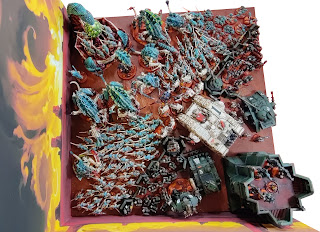 Likewise my Land Raider Redeemer was new and a perfect centrepiece model.

If anything was going sit in the gap between the defence line it would be the Deathwing and their transport. So I added my Deathwing Knights alongside their Green Wing brothers to hold the tide.

I didn't include any medium sized Tyranids as I wanted the contrast between the littlest bugs and the big monsters.

Alongside the Tyrannofexes I had the Carnifex, Swarmlord and a Malanthrope [sadly no room for Trygons].

I'll admit the end result is both tidy and chaotic, I think the top down view helps to define what's going on. 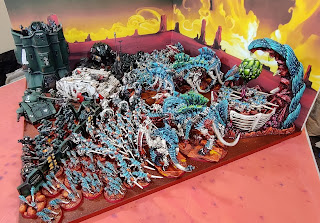 You can see where each forces begins and ends, yes it was deliberate that the defence line was not down the diagonal centre of the board - specifically to give the impression the Dark Angels were outnumbered or being pushed back.

So things were considered and ordered but with so many figures on the word it is rather complex as a display but maybe that's a good thing as it reflects the chaos in the confrontation? 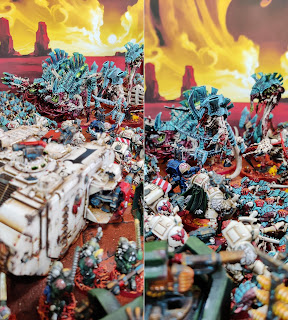 Overall, I'm pleased with what I did, despite the price to both body and mind.

I think it's another great example of how to showcase what you have painted - the new alongside the old and how you can create a parade board with your existing gaming terrain but still make a story out of it.

Warhammer Community will be doing their Twitch showcase at 12:45. Their most recent tweet said "You can see all of the amazing entries for this year's Armies on Parade in our special awards show. Share your board with us below. https://bit.ly/3kIZM0j #WarhammerCommunity"

I impishly commented that it was great they'll be sharing 'all of them'. As much as I would hope for a showcase of all entrants I know it'll be the various winners of both the actual prizes and the numerous special awards.

No doubt they will all be stunning, I've already seen many entries that are such creative feats and beautiful examples of the hobby

I just hope they take the opportunity to do some hobby round-up shows and showcase more than just the winners.

I've seen first hand on Parade Day what it means for a person to see their hobby recognised.

You see it anyway when someone gets a mention on hobby round-up.

So I really hope that recognition gets spread around.

Regardless, I'm pretty sure social media will be awash with Parade boards for all to see today,

I hope you enjoyed mine, and I appreciate this is still a small substitute for my entire Tyranid army shoot that I've not yet done.

But I think I need a while to recover from doing this one!

Anyway, I hope you have a great Parade day too.

I've actually done some hobby recently so there may be some posts incoming.