The problem with these posts is they’re very much a snapshot of what I’m feeling at the time and if I already have a schedule of posts, which unusually I do at the moment then how I’m feeling right now may very well have come and gone/resolved itself by the time this is posted. Nevermind, I will continue regardless because it’s like a tattoo, it’s relevant at the time… or at least seems to be. So where is my head @? It’s all over the place actually.

You probably noticed a few weeks back there was limited service on the blog, this was really due to a lack of content. The Ravenwing were priority and photographs did not really show the efforts and progress achieved. So there was a lot of satisfaction – I’d settled on something, I felt good about it, I’d overcome hurdles [all the metallics] and now it was the black to highlight which I thought I was cool with... and immediately refused at that hurdle. So I looked back at my previous Ravenwing post to reassure me of the process, and inadvertently hit on the same action of focussing on one miniature – the Apothecary. And progress was physically continuous, it just wasn’t mentally. 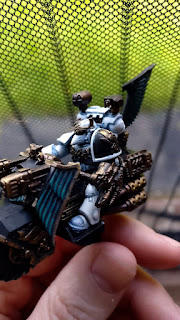 I felt I'd hit upon the approach to overcome the hurdle but I couldn't quite crack it. As much as I wanted to tackle these bikers and get them done they just wouldn't play ball with me. I would add some details here and there but really it was just avoiding the black. I took the Company Champion through both sets of highlights and was ultimately disenchanted despite it remaining true to my previous Ravenwing efforts. I highlighted another bike so I have one completely highlighted with the black and one or two on first highlights, leaving 10 still to do and that’s where the brakes came on as I realised the enormity of the task remaining. 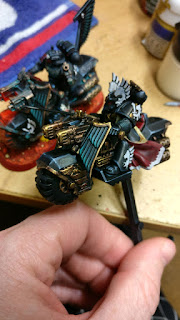 I immediately looked round for an alternative and did a little update on my Assault squad – Stonewall Grey again. I looked mournfully at my Land Speeder Dark Shroud – can’t get past building the Icon of Caliban/magnetising hurdle. I’d solved a problem with Project Z that may one day mean it actually moves into reality but there’s still much to do before I feel confident enough to reveal it. And ultimately it led me back to my Genestealer Hybrids, just Stonewall Grey on their environment suits but it’s stuff that needs to be done and when better to do it than when my heads all over the shop. The thing is I can see ahead to the end of the Hobby Season and I think I’m confident of what I could achieve in that time but that requires my mind to engage and for me to focus on those tasks and I know that’s just not realistic. 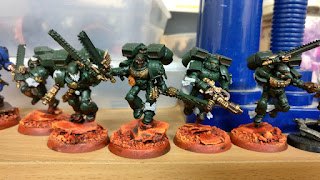 The downside to staying up late to paint is that leaves you with a lack of sleep. I’ve managed to get by on 5-6 hours a night for a good few years now I’m used to it but eventually it does catch up on me. I’ve tried going to bed earlier, it doesn’t make me feel any better and I know for it really to pay dividends it has to be consistent, which means I’ll have to sacrifice the late nights altogether. It also means should I choose to stay up I’ll really feel it when in fact nowadays it’s that one early night that feels worse than the six lates in a week.

None of this is new on the blog though, it’s a perennial moan that I need to get off my chest [mind] every now and again to hopefully kickstart my motivation. Don't get me wrong, I'm in no way unhappy or worse there's just an emotional detachment and frustration that I'm not progressing how I should be. Of course that is the nature of the addiction whereby the enjoyment of the activity ceases and I'm compelled to completion because ultimately it's what I achieve which is the payoff for me at the moment. That's been most evident by not having posted regular TO DONE! posts to keep me 'maintained' and instead bingeing them all at once, which has perhaps prompted this observation

With these thoughts discarded into my internet penseive I hope I can move forwards. It’s reminded me of mushin ‘the mind without mind’ from when I was doing kendo. There are definite moments where I need to stop thinking and just do. Looking at that Wikipedia page I have to say this quote from a ‘legendary Zen master’ is not a million miles from what I’ve been saying from day one on the blog, who knew I’d mastered Zen along the way?


The mind must always be in the state of 'flowing,' for when it stops anywhere that means the flow is interrupted and it is this interruption that is injurious to the well-being of the mind.

And it also reminds me a bit about The Game, which you just lost.

Fingers crossed by the time this post finds itself published* my headspace is once again free, uncluttered and in full flow. But no need to worry about anything I'm just getting my head straight is all, that's what the blog is for.

* Yep, first highlights are all done, whether I'm over the worst of it is still to be determined though...
Posted by 40kaddict at 12:11