It's been a week since my last post which is a big gap for me. That's not to say I haven't been busy, it's just once again the elements that are occupying my efforts do not really translate to pictures. That said I have shaded the 'Turquoisewing'. I'm not sure if this was one or two coats of Army Painter Dark Tone. 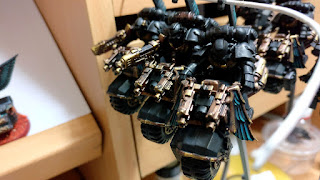 Interestingly I abandoned the plan to use thinned Bahama Blue to transition the black to turquoise. You can just see I tried it on the middle right bike, I may come to regret not doing it we'll see. 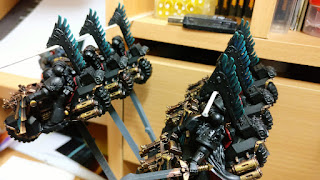 The command/Black Knights however have turned out almost identical to my original bikes, which is a relief to still be getting it right one year on. 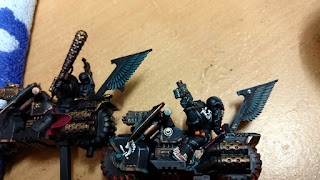 Obviously the black needs highlighting next as the turquoise bits are all done. Motivation was strong at this point but somehow fizzled off the boil in a 24 hour period. I really do not fancy painting all that black 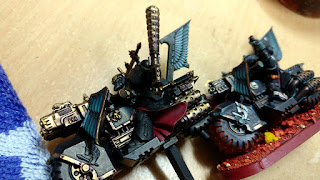 I did conclude that perhaps I'd recorded in my previous Ravenwing exploits how long each bike took to highlight and went back in the blog to my Original Ravenwing Bike Squad. Although there didn't seem to be a record of how long it took I did observe the bike itself is done in 30% of the time, so I might crack on with that at least. But I distracted myself in a similar way to the original Sergeant and painted the medic. Picture one is a basecoat of a pale blue craft acrylic. Picture two is some first highlights on the lower leg.

Day two and I'd pretty much completed the white. I am a strong believer in sticking to a specific colour palette and ordinarily this guy would have been Stonewall Grey, Strong Tone wash, grey and then white - so all the Ravenwing symbols would match. However, this was a way of doing white I'd wanted to explore for a while - if I'd done the Turquoisewing traditional white it was one of the options.

So, although this deviates from my standard recipe having an Apothecary gave me licence to try something different within the confines of the special character. I'm not 100% convinced his left shoulder pad should have been white and some of the bronze doesn't sit well next to it yet but I'm really pleased with the result. 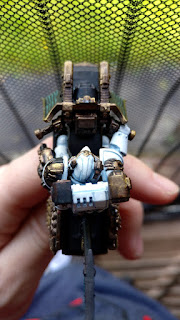 The finish is really good and although it is far from realistic it fits well with my style of painting and would be more than good for those that struggle with the difficulties of white [tell me, are there any colours that are 'easy' to paint? Is it just blue, hence one of the reasons to dislike Ultramarines, that offers simplicity in execution?]. Anyway, we'll see what happens next...
Posted by 40kaddict at 12:43