Afternoon #warmongers and #warhammercommunity I've been #paintingwarhammer Tyranid Tyrannofex for #DreadTober week 3. I'm not entirely sure how I'm doing this, maybe it's the deadline but I'm pushing on through with this beast. 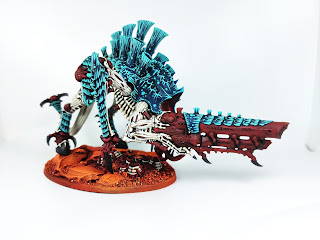 All the highlights on the bone and turquoise are all complete. 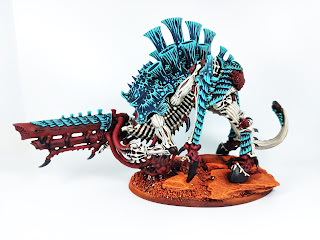 I've been in and tidied up all the reds with Khorne Red. 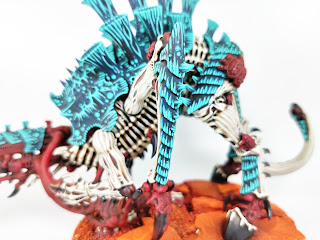 Crisp striations on all the bone. Yes it's quite odd that I've gone all in on fibrous look of the bone compared to my original Tyranids 10 years ago. 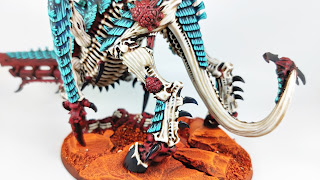 That said the smaller creatures remain simply highlighted on the bone, as there's not enough room for all the lines. 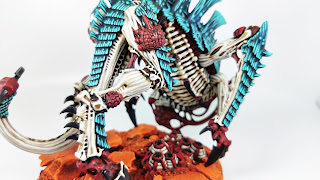 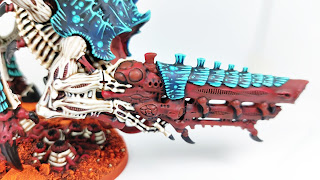 And moving on I did the Adrenal Glands. 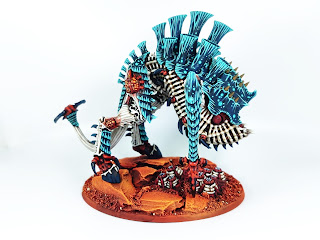 I'd debated with myself about adding some red shading around where the symbiote is attached to the Tfex. 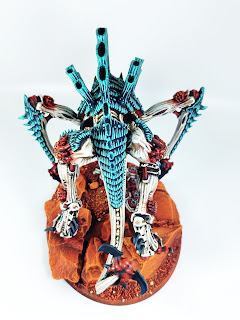 But I should have known that it would look significantly better with that transition, as if the gland was pumping adrenaline into the surrounding area. 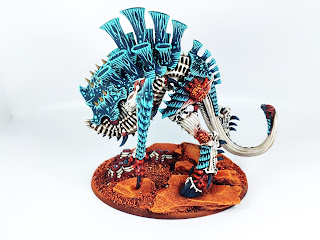 I would describe this as a triumph. It totally lifted it to another level. Not necessarily in my skills, just in the overall finish of the model. 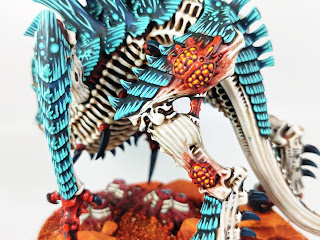 I was pretty confident in that I could do it, I'd just questioned whether I should for the piece. 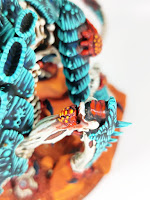 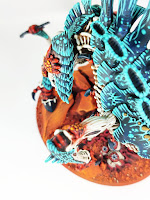 I mixed some red wash with Khorne Red to get the deep colour. Ordinarily it's too milky and I needed something between my Tamiya ClearRed X-27 and thinned Vermilion craft acrylic. 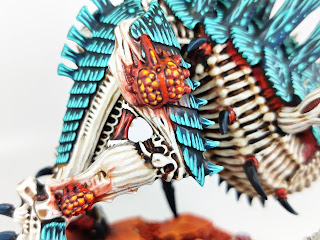 It then prompted me to consider the colour of the vent glow. My first Tervigon is without glow. I hadn't introduced it into the palette, apart from its tongue.

The second one was the lime green.

I was considering at this point to do it it red [to white] just for something different. But I know how difficult the red glow can be [my Ravenwing headlamps are sketchy]. I asked a couple of hobby luminaries [Greg and Marcelis] who both agreed to go with green, so that's what I'm doing.

That may prompt me to go back and do the green glow on my first Tervigon eventually, we'll see. For now, here's my progress diary, this was pretty much up-to-date. I think the next Monday session has the Adrenals. I was still panicking at this stage whether I could get it done in time... 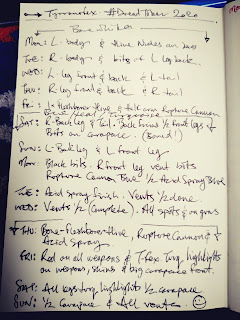