Typically after my last 'What's on my palette' post I immediately found painting the Cultists far too tedious and flitted on to what I'd always expected to be my next project - my Dark Angel Assault Squad. Of course their original reason to be was to fashion the Dark Angel Formaiton allowing me free transports. Of course in 8th those Formations no longer exist! So now the main reason to be is they look cool, but those Flamers are 'winning' in 8th by all accounts, not to mention chainswords being more beneficial. 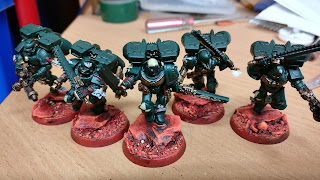 I'd been hesitant to start the Caliban Green as I knew it was a significant part of the process - 30-40 mins each. I know that sounds shocking for a basecoat but I'm just so slow. I did throw in the company colours on the knee and picked up some other elements like washing all the grey and bone parts. 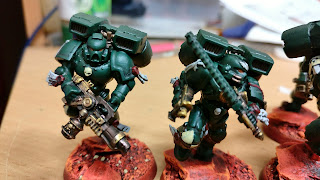 Three nights got me to this stage ready to do the next stage of highlights on the green, potentially another three nights. It should be really interesting to see where these are a week hence. 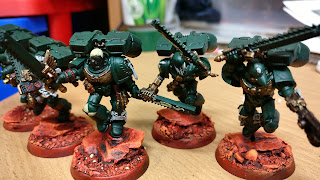 I can envisage them potentially completed by the end of June as I don't think there are any challenges beyond the norm. With those out of the way it'll be back to the cultists with no other diversionary projects [I doubt the Razorback/Predator will appeal instead] and I'll be forced to persevere with their completion.
Posted by 40kaddict at 12:18