A fair few regular bloggers and vloggers have been getting in their new 40k battle reports but only now have I had a chance to see what 8th edition is really like. One might think that in the intervening period I've become fully au fait with the rules to ensure a rapid transition but you'd be all kinds of wrong! Ben and I arranged a game, I set it up whilst he was slightly delayed saving some actual human beings life! Big up the emergency services. Anyway it was 9pm by the time we'd gone through rigmarole of the new you go/I go deployment. Sad to see that we'll no longer be able to set up and then nip to the loo while your opponent does their deployment. Anyway it was Vanguard Strike, Cleanse & Capture 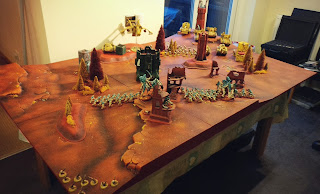 I've not done this sort of deployment since 5th edition - just massed line ready to cross the killing field and engage. I had a Tervigon, big brood of gaunts, the Swarmlord, a Carnifex, a Biovore, 20 Hormagaunts, 3 Hive Guard and 20 Stealers hiding in a Trygon's tunnel. 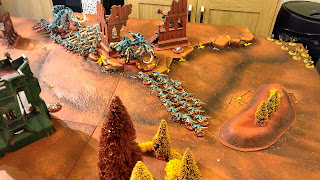 Ben had all this - whatevs! 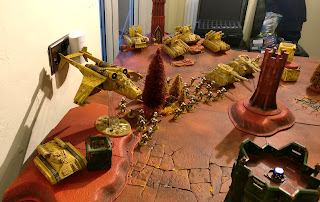 I drew Supremacy as a card so I Advanced my Hormagaunts to get a 3rd objective and secure the VP. Crazy to see my Advance roll of '6', + their 8" move and they're now 14" up the board! Although in reality they could do that just as well in the old codex - 6" plus D6+3" versus 8" plus D6". The charge is also different because although you now get the 6" pile in move previously you got to re-roll that charge. Regardless it seemed fast, despite it effectively being less so. 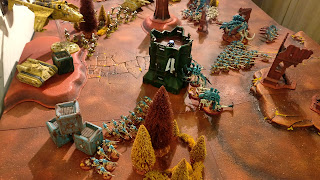 Whereas the Trygon burrowed up and brought in his buddies. Well, who wouldn't try a first turn assault with these things now that we can. Unfortunately the Trygon failed his charge, possibly took a wound or more in Overwatch. 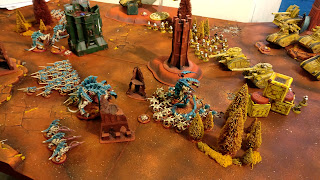 But the Stealers made it, swarming forwards and putting 9 wounds on the Leman Russ, from the 14 Stealers we worked out were in range. Meanwhile the Hive Guard managed to wound the Vendetta, I think 5 wounds. I scored a single VP for Supremacy, darn D3! 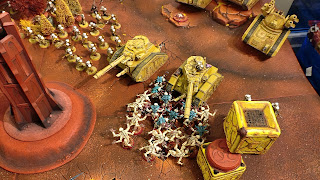 The Vendetta took revenge, whittling down the Hive Guard and wounding the Tervigon. Throughout the game not a single Termagant was attacked let alone killed! So much for their Brood mother boosting their numbers. 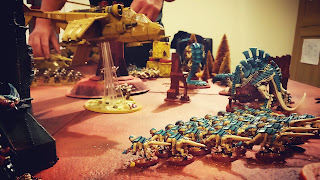 With the Leman Russ falling back the Stealers were left exposed. We think we played this wrong but it is our first game and we'll let it slide but the Stealers were completely wiped out thanks to the combined tank fire and rapid firing guard las-guns. 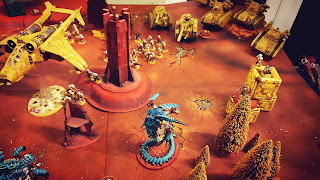 To make matters worse there was sufficient firepower left over to remove the Trygon as well - so much for that first turn assault :( Ben walked away with First Blood for the Stealers. 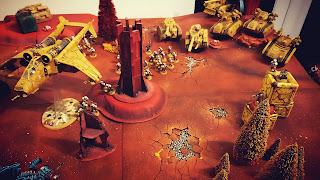 Turn 2 and the Hormagaunts assault the Hellhound, I think I did just one wound to it, it had suffered 3 Mortal Wounds off of Smite cast by the Swarmlord. Clearly just because Hormagaunts can wound a tank doesn't mean they should - perhaps I need a better understanding of the right tool for the job. 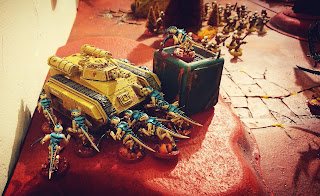 Who used his Hive Command ability to charge this unit of guard, 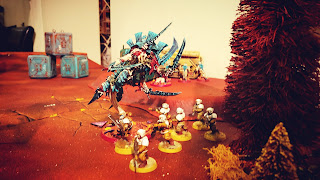 Decimating them all and consolidating into the woods. I think at this point we began to realise that we can't continue to resolve each assault as a separate entity a la 7th, there is a charge phase and a fight phase for a reason, especially as Ben wanted to to use a Command Point to assault first against the Swarmlord. But again as it was our first try we carried on as normal with a view to trying to get it right next time. I came away with Objective 3 and Behind Enemy Lines for 2 VPs. 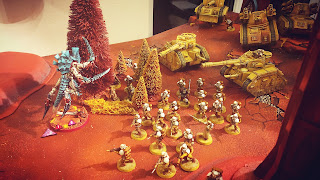 Ben turned his attention to the rampant Swarmlord, with so much fire power at his disposal it was kind of underwhelming when just one Las-cannon did six damage wiping out his remaining wounds for Slay the Warlord. 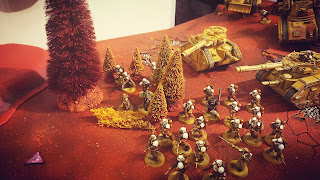 The Basilisk pumped shots into the Tervigon, or the Hive Guard, I think there was just one left in the end. 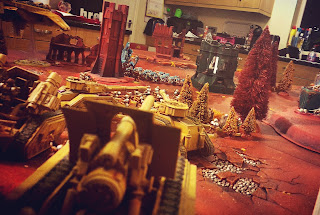 His Ratlings had had enough of the 'not a Pyrovore' Biovore. It had already taken a few out with it's Mortal Wounding Spore Mines. 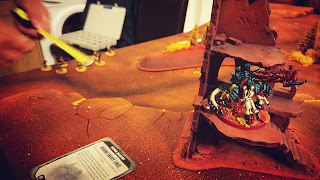 So saw the business end of their Mortal Wounding sniper shots, while they camped in my DZ for Linebreaker. 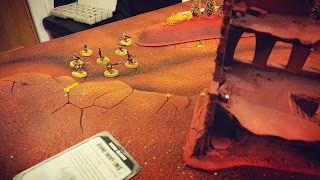 It was midnight and we'd only got to the end of turn 2, I doubt even if that inconsiderate cardiac emergency hadn't had delayed the start *joke* we'd have got more than another turn in. End result was 5:4 to Ben, but the big question is what do we think? I think it's still a bit early to tell for us, a lot of change is clouding our judgement and although there was a lot of dice rolling everything seems to have gone bigger but damage and casualties are bigger too. It's definitely more of a bloodbath but whether we're convinced by it at the moment is irrelevant as this is the edition we've got and we'll have to come to terms with it.

So far though the increase in toughness of everything means those tanks are just so much more durable. Whereas before you got past their armour and they took damage, now they get the armour save just like everyone else, which is quite disheartening when you see those three wounds your feeble little Hormagaunts achieved wiped out without a blink of an eye. I'm certainly finding the fact nids are no longer Assault weapons across the board a little difficult to keep track of, mainly it's the Hive Guard that suffer this and I suppose they got their extra BS back, although it serves me right for shooting at a Flyer that I didn't feel the benefit.

Cover seems a step too far. I'm OK with all cover being just +1 to your save, that's simple, streamlined and reduces confusion. But you only seem to get that if you are in terrain, intervening terrain means nothing. Of course that requires a bit of interpretation but we've already got a precedent of larger creatures needing a % of obscurity to benefit from cover, but again, only if they're in it. We all understand the intervening cover mechanic so I think it should still be in place. I get that +1 to a save seems like a big deal when you're -1AP is having a big impact on survivability so perhaps cover from intervening models makes sense to drop but not having intervening terrain confer a benefit, then what's the point of having it? You may as well have an empty board because the chances are it's only going to help your infantry when they're standing in it and any other terrain will need to be complete LoS blocking to benefit something more than your rank and file.

Like I say, it's too early to tell for us, we probably went too big with 1,500pts. I think we'll go smaller next time. I kind of feel I need a beginner's session  like when I used to go to the GW beginner's Sundays. Although some of the reports I've seen online suggest the grasp in-store of the rules can be just as open to interpretation as ours is. Anyway, lets see where we are in a few games time.
Posted by 40kaddict at 12:13