I was partnered with Rob Nathan for the final game. His turquoise 'White' Scars were immediately familiar as he attended the Birthday Bash in February so it was nice to be paired together as we hadn't spoken back then. His army was just bikes and attack bikes, with a healthy dose of Grav and a Librarian. We were up against David Irving's Death Guard and Mark Hinson's Tau. Obviously we know Tau are annoying - their ignores cover was going to make use suffer and the Death Guard, with Typhus in a Kharybdis Assault Claw and a Fire Raptor Gunship - things did not look good for us.

OK a week on so my recall is going to be even more shaky. Here's the board, looks likt Kharybdis has arrived. 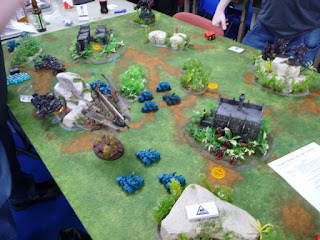 Tau in the middle. 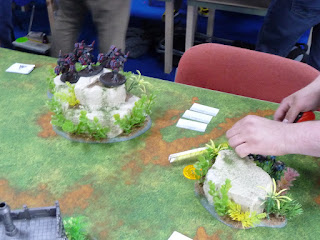 My bikes opposite the Riptide, Rob was backing me up with a unit of bikes and Attack bike on the left out of shot. 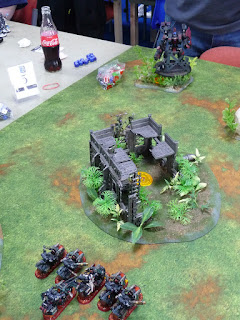 Land Speeders were going to have to face the Assault Claw. 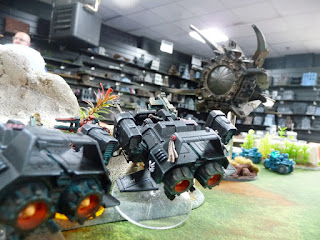 But Rob had scattered his forces thanks to my Infiltrate 3 units Warlord Trait, but had coincidentally also forgotten to pin 3 enemy units, exactly what Ben had done. By the end of turn 1 Dan and Mark had scored 2 VPs and we'd got nothing thanks to no numbered onjectives - just killing units which we were struggling to do. 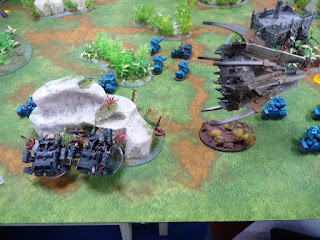 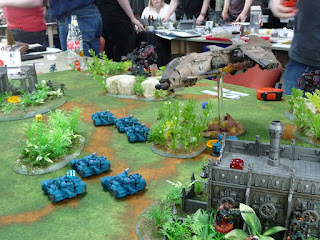 And looks like it took out some of the bikers 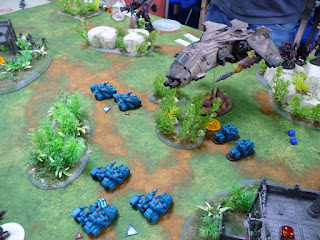 The Assault Claw disgorged it's occupants - Typhus and his guard who were going to chew through my Land Speeders with ease. 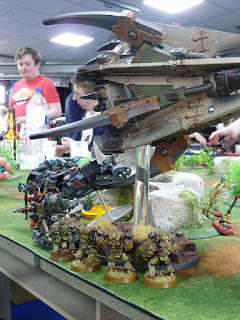 My Techmarine was in amongst the filth and corruption. 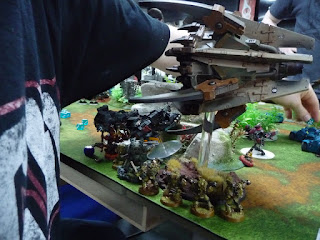 He stood steadfast, but one of the Land Speeders was wrecked. 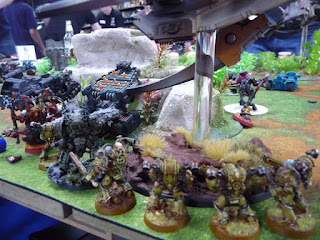 But was overwhelmed by numbers taking first one wound then forced to take another two saves on his 2+ armour. 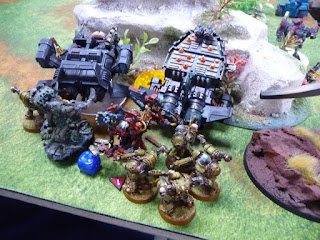 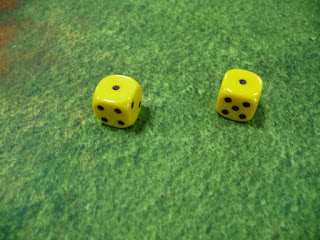 He fell to the foul diseaeased marines, while Typhus assaulted the last Speeder. 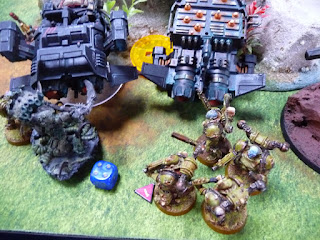 Which he destroyed with ease. D&M were on 4 VPs by the end of their turn 2. 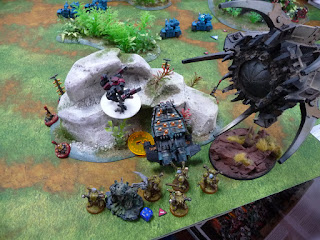 We assaulted with the Attack Bikes. 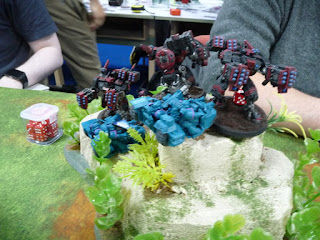 My Dark Talon zoomed on. 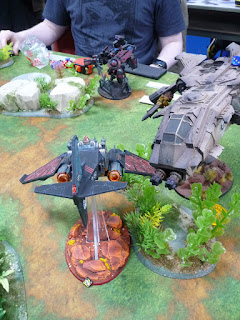 We socred a VP in our turn. 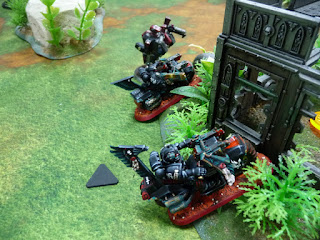 The Attack Bikes turned on the Death Guard but doesn't look like they did any damage and were now in a precarious position. 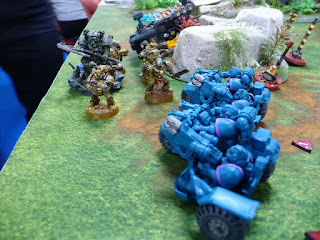 The Assault Claw moved off and by the end of their turn three they'd scored another 5 VPs. 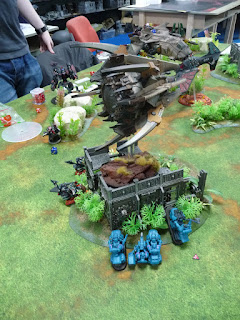 Chaos Cultists over-ran my drop pod to contest the objective.. 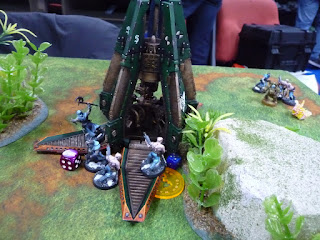 The Death Guard killed the last of the Attack Bikes. 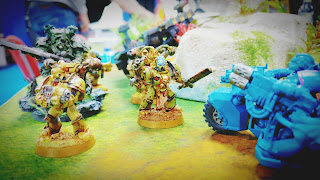 The Fire Raptor continued to wreak havoc, I think taking out the Dark Talon 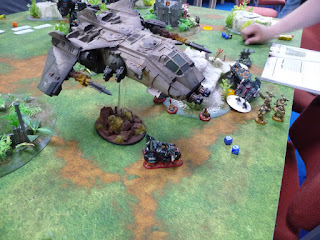 and then the last of my Ravenwing. Another 2 VPs to D&M but we pulled two back in our turn, although by this stage all of Rob's White Scars were gone and it was just my remaining Dark Angels left scoring points. 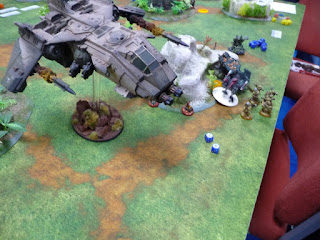 The Riptide started to traverse the battlefield. 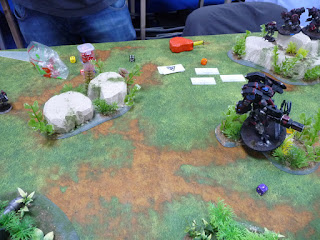 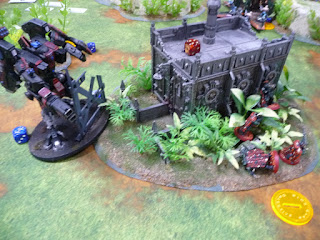 Turn 5 and we got right royally mullered! My Scouts had gone to ground to stay alive but to no avail. D&M scored a maximum 9 VPs for holding three objectives for two consecutive turns* 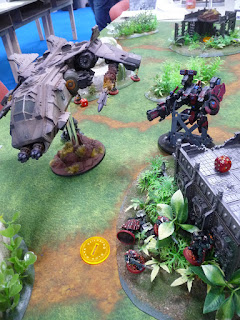 They kept my drop pod alive to keep racking up the VPs, I scored none, we rolled for turn 6 and they scored a further 5 VPs that turn. Turn 7 came along and they were able to score another 7 VP. Final score was 32-4, we'd been properly brutalised and only scored 337 Blood Points too. 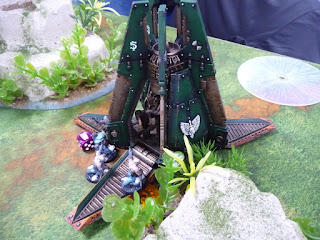 Despite the scoreline I had a really great game, very tactical and these guys were a lot of fun. I think I ended up in 12th place which was a little disappointing given how well I'd started off but ultimately the most important thing for me was just playing games in the company of great people and in that I was definitely a winner! Bring on Double Trouble 3!

* Now, Alex did question such a high score, I had been keeping track and dutifully jotted down the scores Dave and Mark had achieved but in review I've definitely noticed one anomally in the scores I was given. Turn 5 was a maximum 9 VPs for holding three objectives for two consecutive turns. If the 9 VPs are correct that means turn 4 should have scored 0 VPs.

The objectives were always a gamble, you either scored 1VP or gambled on holding it two turns for 3 VPs. Even if they'd thought they get both and held the three for one turn and also claimed the 9 VPs for two it should have been 3 VPs turn four then 9 VPs turn five so I don't know what was scored. However, if the turn four score is correct, that's either two objectives or 1 objective worth 2, which means they achieved either one or two cards and as you only hold three cards at a time there is no way you can then have held 3 objectives for two consecutive turns for the turn five 9 VPs. Without recording actual objectives scored it's impossible to tell what went on.

Bottom line it would have made no difference either way to our result, we were totally outclassed and not for one minute do I think there was anything intentional going on. We were playing really fast so I'm convinced it was an honest error but it does make me think how these things should be more streamlined to prevent this and keep track of what's scored. I usually take notes, I did in game 1 but this fell by the wayside game 2, in future I must be more dilligent. 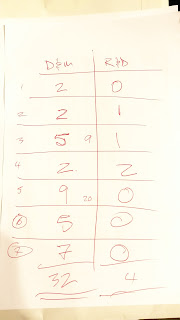