BASE - in your face

The queue jumpers all got based, tried to get some pieces of slate on their too so the notoriously unbalanced Hormagaunts were less tippable. Funnily enough I've just been looking at some of the other formations and realised that I need a few more Hormagaunts so I can try out the Endless Swarm formation and I may want to investigate more Gargoyles too, it's about time I gave them another shot. 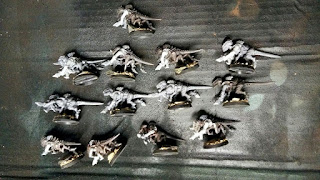 As mentioned though I did not completely abandon the Dark Angels, the Knights all got based too as I made a decision and chose not to add any stealer limbs on the bases, although the Thunder Hammer dude does have a Stealer skull. 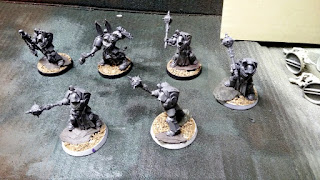 I primed them all with Army Painter Skeleton Bone Primer which is really good, because it doesn't pool in the crevices. In this lighting the coverage looked great but closer inspection did show some of the darker areas from the badly stripped old painted models. However, in this instance I'm happier with a thin prime than some thick blobby coat. Afterall there are going to be successive coats of paint on top too. I started my Red Planet Basing with a coat of Vermillion, which wasn't dry by the end of the evening. Army Painter Strong Tone is next but it seems like that's going to be another night before I can begin to base them proper 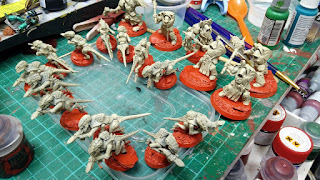