I don't use LOL or OMG but in this case OMG! I love Flagellants. When we ponied up as a group for Warhammer Fantasy Battle, the first big box edition with the mighty heros  printed on card(!) not even as plastic, it was Flagellants that caught my eye in the Empire Army list. However, Marauder miniatures were theonly real option of sourcing them at the time. Marauder was a GW offshoot by Ally and Trish Morrison who modelled their own figures and sold them through GW. They we're all quite cute and cartoony, the Empire Dwarves in particular were darling little things. The Marauder Flagellants were 3 for £4 and even then that wasn't a price I was prepare to pay.
So in walked [shambled] these fellas. Some form of militia figures and I wanted them all flame like so went to the most extreme highlighting from red through orange, yellow and white! All wood and stuff was pure white and the odd item was picked out in a random, appropriate, colour. Here's the ten lined up, each a character. 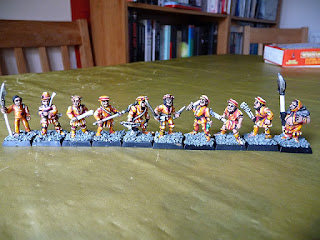 The gormless halberdier, the piper, the thug, the childcatcher and a crossbow dude with a peg-leg! 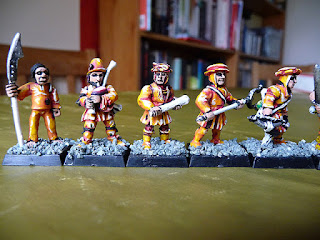 A knife fighter, a drunkard, two butt-ugly clubber twins and the fattest halberdier in the Empire. 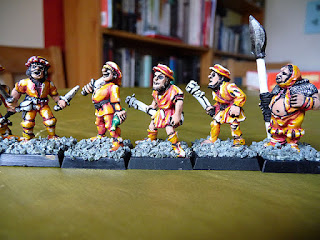 A view of the back of the guys. 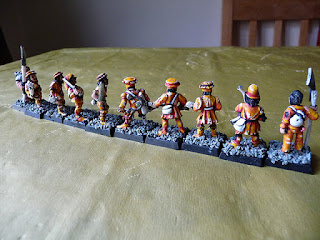 The pure white sachels and the odd green glass bottle really look striking, moreso if I hadn't have added the highlights to the red clothing, still nothing a wash wouldn't fix, right? 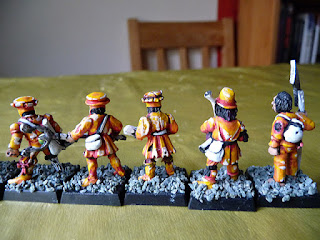 Another view of all their gear from the back. 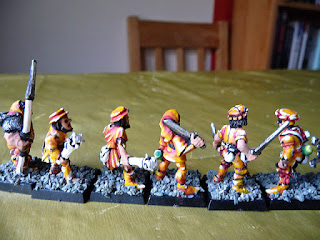 ﻿Now if I start looking at completing the Empire Army I first started 18 year ago I'd totally go with plastic Flagellants. They actually look like one of the best value sets out there. Quite a few figures and loads of bits for conversion purposes and bits that'd fit right at home with the Dark Angels.
I have one question though, in the current Empire rule book Flagellants are Rare [I think] but if you take a Priest they become Special [or core] is that in addition to the Rare unit or instead of? Let me know if you can answer.
Posted by 40kaddict at 13:09