My son got an Eldar Fire Prism for his birthday the other month [and another 4 pack of Guardians]. I've tried to approach this with him doing even more - I gave him the clippers to remove the Guardians from the sprue which immediatley he responded with 'I can't do that!' I said 'well I'm certainly not' so he went at it and I cleaned any extraneous bits and mould lines with scalpel.

Now I did do some of the removal for the Fire Prism as he was busy gluing the Guardians so by the time he'd finished some of the Fire Prism was ready to construct which prompted a bit of shock on his part because he thought there was too much to glue and he only wanted to do the 'little things'. I said tough, he'd decided he wanted the tank and he'd be putting it together. Now I know this sounds a little harsh but heck I could make this thing all by myself and we'd be right back in the same situaiton as the 'nids. So if he complains then he's doing it and meanwhile I can still help out unobtrusively, like trimming the parts out while he was busy, and he still feels it's his project.

Now this isn't helped by GW, the Fire Prism sucks. Not in a major way mind, as you can see below we haven't made much of it but already I've had to make compromises. You get these extra bits to go in those engines if you want to represent Star Engine upgrades. I asked my son if he wanted them, allowing his decision making alone, he said yes, I go to put them in and there too big. There seemed two ways you could mont them inside the engine cowling, the diagram wasn't very clear. Both ways spread the cowling apart so there was a 1-2mm gap between top and bottom. So I had to deny his choice of adding the Star Engines. That's not my fault but it still feels like I've said 'what do you want? OK that's nice. We won't be doing that!' 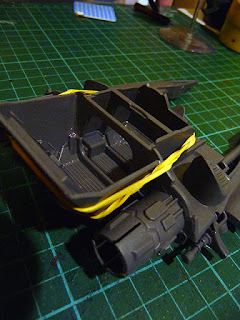 As you can see in these two pictures elastic bands are a useful tool here. GW's moulding once again lets us down. The hinge cup that holds the back door is not big enough to house the door rods that go in it. This puts pressure on the join to the back of the Fire Prism and effectively rips it off the chassis. You can see above the poly-cement 'welding' I had to employ in the corners to join these suckers together. 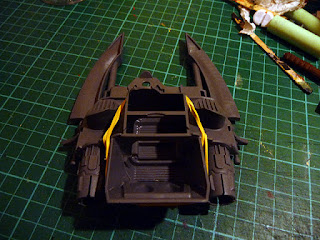 On top of all this the hinge mechanism and the weight of the back door means this thing won't stay shut. There's all sorts of little nubbins on the thing that you'd think would hold it in place, but no, if flaps open like someone was 'born in a barn'. So we may well just glue the thing shut, it's not like it has transport anyway. A shame though as having something open and shut is just that little more interesting for a nine year old. Even bigger shame are the compromises made so early in it's construction, ruddy wraithbone!﻿
Posted by 40kaddict at 12:21