Afternoon #WarHamFam and #WarhammerCommunity and my third Blood Bowl match and I'm up against Otty and his Squig team. Well I say his team, but I think he was loaning one from David. Some things to note, Otty was not having much success, his bigger, stronger squigs bounced around in random directions - so although I was rightly terrified of them he constantly bounced around their intended victims. We were also running very late and only got the first half in. 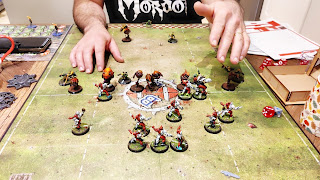 If I'm honest I don't recall what was happening here, I think I got to shuffle off the line of scrimmage so I wasn't quite trampled on first turn. Oh, there were Chainsaws thrown on the pitch too, that's my Lineman running back to my endzone to pick one up. 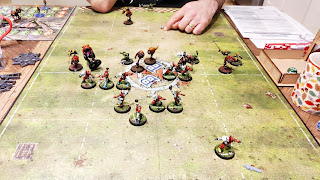 I then managed to get the ball and went off up the right wing, with two catchers for options on who to throw it to and my Ogre getting in the way to draw attention away from them. 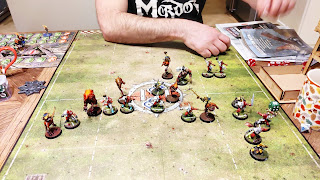 My Chainsaw guy got to work butchering squigs and Goblins but with time running out I snatched a touchdown, 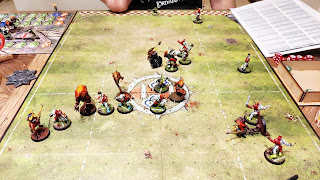 Despite my hazy memory there was one golden bit etched into my brain. I had got slightly frustrated with mixing up the D6 dice with the Block dice so had mixed two different coloured sets. But even so at one point I picked up 2D6 to block and rolled 10, to which I immediately said that would have been a great armour roll. I the picked up the correct dice, succeeded in my block, went for the armour roll and rolled 12! Then the injury roll was 11! 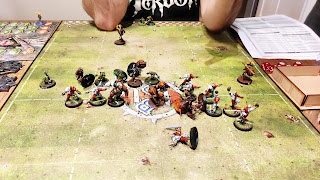 Otty continued to have misfortune after misfortune. Even when his big Squigs did bounce into my player he seemed only able to push me back, despite their advantage. His dice were cold and mine were hot. We came to the end of the first half and called it, his team broken losing 1:0. 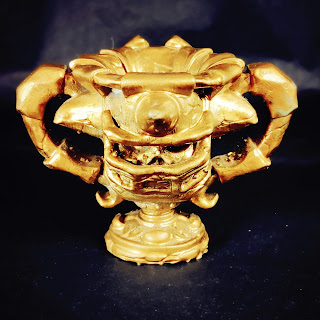 Somehow I came 3rd, which was fine, I even got this dinky little trophy. I had a lot of fun, moreso because I completed a game [2 actually]. It certainly helps when you're playing someone who knows what they're doing and is also willing to help you learn to enjoy the experience. I doubt Otty is motivated to play much, maybe he needs a team he's comfortable with and is less random. Humans are pretty average across the board so I think that faired well for me. I'd considered my Nurgle team but didn't want to complicate things with their extra rules. Overall I had a lot of fun, as this picture can attest, and I think it also illustrates Otty's feelings about Blood Bowl...