Afternoon #WarHamFam and #WarhammerCommunity I've been into the hobby for decades now and my first game was Blood Bowl but the new[ish] version, I've never actually played more than one half of a game. But Otty had some friends who were having a Blood Bowl tournament and needed someone willing to make up the numbers, there were only 6 of us. The great thing was it was very relaxed and David, who's birthday it was celebrating was more than willing to treat it like a learning experience and help me out. It brought back memories of attending the Lost Boy's gaming club in Ainsdale. Anyway, I got 3 [more like 2.5] games in but even when I was taking these pictures I wasn't sure how much of a commentary I could make and certainly not a few weeks later now. But I took the pictures so I will damn well share them, not that my Blood Bowl posts are particularly popular either, so I appreciate it if you don't want to peruse them with limited sketchy context. TBH, I'm not even sure if the pics are in chronological order.
Anyway, Dave was running Troglodytes, which I think is from the wider fan based list of teams. They're slightly tougher than Halflings and with two Stone Golems that randomly swirl about the board flattening people if they bump into them, but if they fall over they shatter into rubble and removed from play. My Middenheim Marauders take the field. 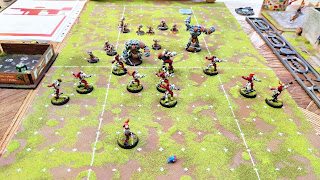 I think I kicked the ball to David, but it looks like I've had a few players fall down. If I remember rightly one of my favourite players - Joe Mauler was hit by a rock thrown by the cord and injured before the kick-off. 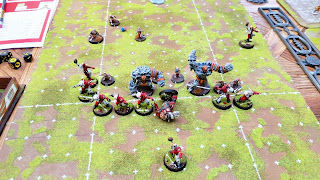 One of the Stone Golems has left the field, I think the Ogre and a bunch of other players ganged up on it with them both falling down. The Golem came off worse, but I think I was still stunned. My Catcher in the top right was about to get bundled off the pitch too. 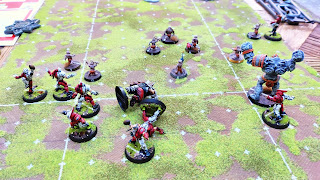 I managed to get a line of players back to defend against a break down my right wing. 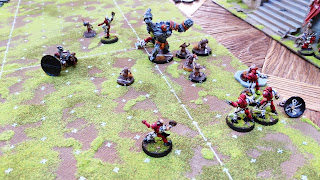 Not sure what happened here, looks like David threw a pass but somehow failed to get the ball, or maybe fell 'going for it'. I think this marks the end of the first half and it was still 0:0. 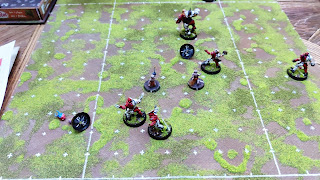 2nd half and the ball was kicked to me. 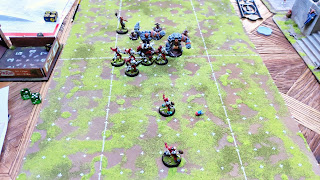 My ace thrower 'one eyed Jim' picks up the ball and my catcher heads up the field. One of the Golem is removed from play. My catcher get ready to make a break for it but there are some Trogs heading to sack One Eyed Jim. 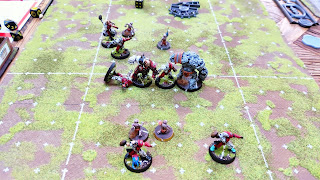 Somehow he evades them heads up the field and throws to the catcher but misses. Luckily the rest of the team form up to block any pursuit. I think I then must of recouped the ball and scored. 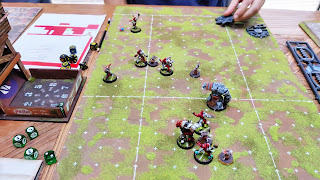 We line up again, with 2 Golem back on the field! 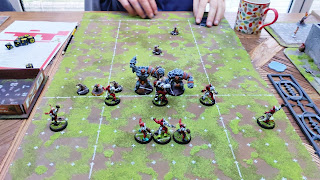 My Ogre gest smashed and the Trogs break down my left wing. 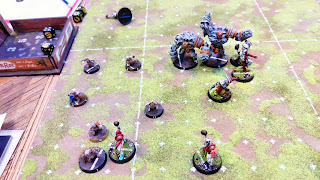 I try to hold them back with putting bodies in the way, but to no avail David scores bringing us even on 1:1 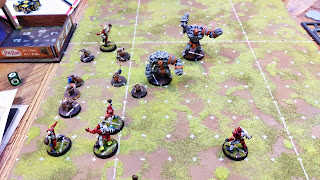 We line up to receive. 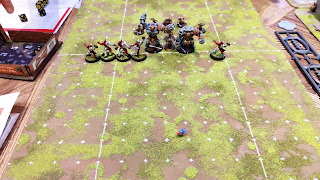 Then I think I got to make an early move on the kick-off table and rather than have everyone pummelled by stone Golem I just bring them back to hold the ball and finish the game. 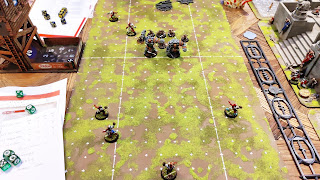 David did point out afterwards that me getting that early try allowed him the opportunity to draw even so it's worth thinking on that in the future, he was helping me, but not 'completely' helping me, which I respect and is perfectly reasonable. On to game 2.
Posted by 40kaddict at 12:08