It's all mixed up now. I cracked on with the Rippers, as you can see they are almost complete. Not sure if its 100% clear they're bursting from the ground but they definitely look a lot better than my original Rippers. 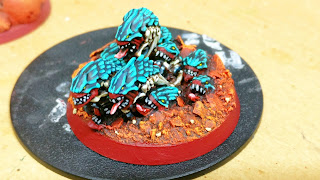 These need their teeth painting, another coat or two of Valejo Heavy Red on the base edge and then Army painter Anti-Shine Varnish. 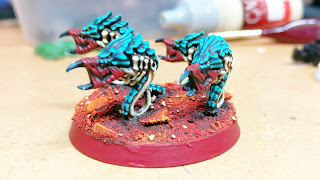 Here's the second set of Bonewhite highlights on the tail. So pleased with the result and just how fibrous it looks. I originally intended for these front sections to also be Chitin blue, given it doesn't feature on the plastic version and would add some extra variety. Considering the result I don't feel so bad about the lost opportunity now.

The Chitin on the tail is definitely something I've been avoiding and as the base edge on the Rippers was drying I used it as an opportunity to tackle some of the plates. I'd done 12 of them before I started to get bored and as I still had some Turquoise on the palette I managed another two or three more. 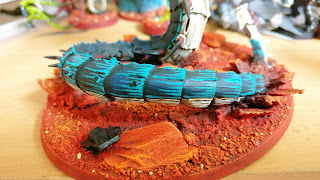 Frustratingly I only did one side of the tail and I'm not even halfway up the tail on that side. You can just about make out as the tail curves up the plates get compressed, which means there are a lot in a small space. Then as they go up the back they get bigger, which will take just as long as the small ones. The brush strokes are pretty rough though, hopefully the next highlights will be sharper. 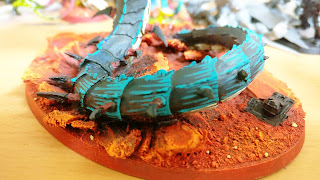 But the purpose of this effort was to move it on, and I've done that at least. I think I may get all the first highlights done and then focus back on the Land Speeder Dark Shroud for a bit to take a break from this.
Posted by 40kaddict at 12:12