Moving on and it's the second set of bone highlights. Once again I'm reminded just how easy nids are to paint, I'm even painting in texture that isn't there to entertain myself! 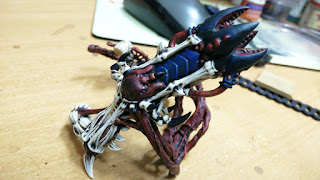 Pretty much the entire scheme is this:
I don't know why but this is so much easier than any other army I've painted. Obviously the monotony can be a little debilitating but I think I'd rather have that than all the extra fiddly bits a Space Marine has. 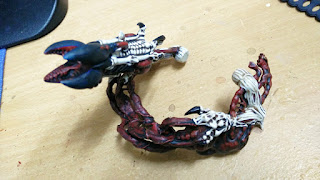 Anyway, Bone is done, Chitin highlights are next and given little is required of that step I'm pretty sure I'll do both sets of highlights in my next session. 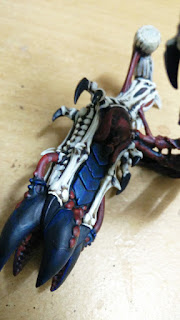 Which will be handy [or 'clawy'] as the CCs are now up to scratch [pun intended] too, with their own second bone highlights. 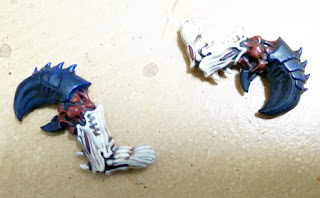 You never know, I may even get the claw highlights done too, leaving only the fleshy bits to sort out, which will obviously be a big deal on the acid spray. 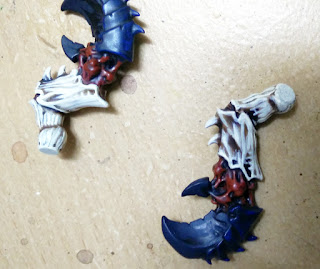 AsaltoRabioso Lleidaasked for pics of it on the Tervigon/Tyrannofex. One thing that has struck me doing this is howm much I love that Mawloc/Tfex head conversion. Sure it gets lost and is hugely inconvenient in this role but I just love the end result in it's normal guise. 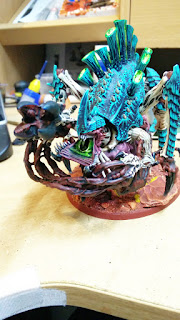 Ordinarily I might consider hardly any highlights to the fleshy bits but they really need to match up with what is on the beast already. Fingers crossed I can find a way to match it up, I just think it was someMechrite Red mixed with white, or Bonewhite. 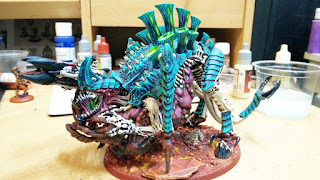 I had considered making an attchment of 'spray' - a wire frame covered in flock and glue. Regardless the spray will have the same toxin green effect to tie it altogether. 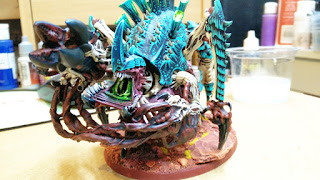 It really is a big beast isn't it! I had such a horrible experience painting the first Tervigon and then a somewhat pleasant time with this one. I'd really love a third, even though I've no need for it as I hardly run two let alone three. Even if I did want three in a list I still have my Proto-Tervigon, which if it wasn't representative of my first big conversion I'd be stripping back to be a Carnifex now! 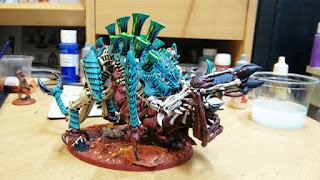 Alternatively I'd consider making a Dimachaeron of it. That seems to be the popular conversion route and it still amazes me how much this model is to buy compared to some of the newer, smaller models that just do so little in the game. 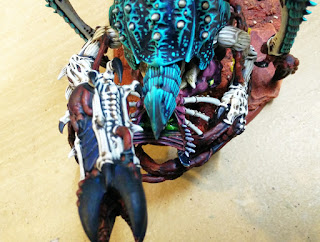 Still, ever onwards, I:ve plenty more to paint before that's even a possibility :)