On this here blog I have my regular 'what's on my palette' posts that informs and structures what I'm doing and where I'm at. But I also have 'Where's my head @?' which is more to do with how I'm thinking and feeling about the projects, blog and all the great mysteries of our time.

Despite juggling a number of projects to keep my mojo going there is always a despondency after completing one, in this case the Ravenwing. So I thought throwing the Land Speeders into the mix would continue that momentum but as alluded to in previous posts the whole bronzing task fills me with the urge to do anything but move the speeders along.

So I shifted my attention to another onerous task. I'd tried to crack on with the Genestealers before I went on holiday. I'd made some serious in roads in the first set of highlights on the chest and back, well beyond my expectaions. Then I started to do the legs and these are much more laboroius, with the first gen stealers having three parts to their legs I managed to do only two on top of five 2nd gens before I gave up! So I committed to painting the remaining 1st gens as the newer ones are a fraction easier and I think I can manage the 15 left in one sitting and then it's the arms, which are even more depressing.

I have taken the opportunity to do the odd arm here and there so the little surprise of a model being complete is discovered during the next batch session but once it's done I have to do it all again with second highlights :( but here's the progress chart so far which somehow seemed doable before the end of the hobby season, now less so. 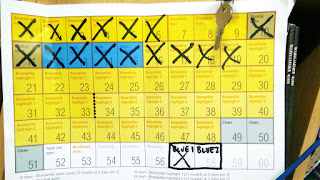 I've even took to throwing some paint down on the spare weapons for my Knight Paladin. It's definitely worth acknowledging that this is another diversion from more pressing or essential tasks. I've been mentioning those a lot in recent posts so it just goes to show how much of a mind game getting on with your hobby really is.

I really want to achieve a few more things - the Knight, the Dark Talon, perhaps the Land Speeders before the end of the season [August 28th] but I'm sabotaging that goal by doing other things. Granted I'm doing things also on the list but I only have a finite amount of time and effort and it looks like I'll end up a number of 'nearly finished' items. Which will make 2016/17 look pretty impressive if they're completed next season but I did have plans to crack on with other projects.

The problem with how I write my blog, sometimes in advance, sometimes 'live', is that when I have a moment of doubt that it can be reconciled within 24-48 hours. Having near continuous hobby routine - 1.5 to 2 hours a night, when I struggle one night it can be resolved the next. As the downer from achieving the Ravenwing hit I struggled through all the above and then suddenly the Dark Talon/Jetfighter raised me up. I progressed, almost autonomously because the black shading and subsequent painting are pretty straightforward. Before I knew it I was out of the doldrums and [semi] focussed, semi because I threw in the remaining legs on the Genestealers.

So my head is back in the game and I have sufficient willpower to get the flyer done and we'll see how far that momentum takes me on other projects.