Game 3 and all my Christmases at once I'm not only paired with From the Fang event organiser Alex for the last game, but I also got to play against Luke Fogg from Darksun Life and lets not forget Matthew Spencer and his Tau who paired with Luke


The low down:
OK, do I have a clue what went on in this game? Perhaps Luke and Alex can fill in the details in the comments and I'll try and add them in. Clearly I infiltrated my scouts into these ruins with Alex's Dark Eldar. 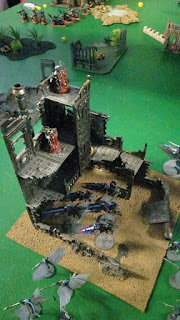 We then found the rest of the family for my dice, I'm not sure we were taking this seriously, we'd already gone for drinks at the start of the game, ha, ha! 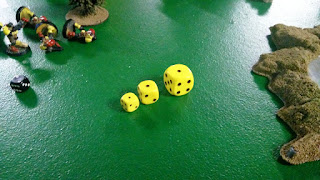 I was on the left, Matthew the right, Luke opposite me with his Howling Griffons and Alex top right. I'd scouted the bikes into the wood to score that objective, clearly. 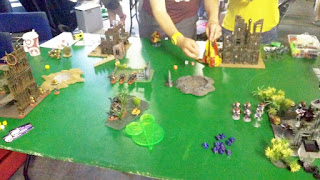 Turn 1 and Luke and Matt get off to a roaring stat, slaughtering our forces and capturing objectives. Alex kept telling me excitedly how his Scourges were making their 6+ armour saves against Luke and then looked over at my side of the board asking where all my ravenwing had gone, failing to make their 3+ cover saves. I hadn't jinked so they could still fire so didnlt get to re-roll - lesson learned? 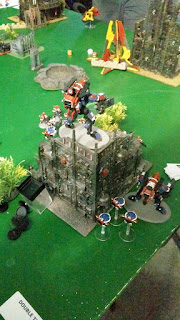 In response we managed to score 4 VPs in turn 1, not sure how far into the game this was but my tactical squad is on foot, so I'm guessing they lost their sweet old skool ride. I'd eventually storm those ruins and capture the objective inside. 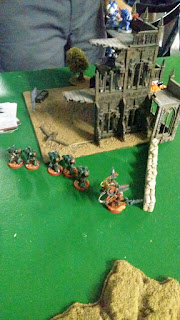 Meanwhile the Tau went pretty unmolested, their stealth capabilities making them nigh indestructible and adding a further 2 VPs in turn 2. I think our cards were pretty dire, asking for unattainable objectives held by our opponents and we failed to score anything. 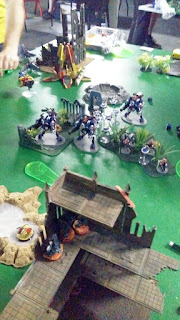 Alex's force wilted under the Centurions assaulting the ruins, my own scouts had been shot to pieces, denying us 3 VPs for holding the objective for two consecutuive turns, we'd gambled and lost. 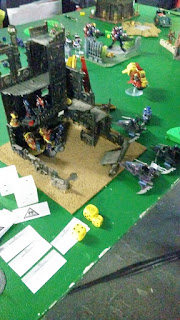 Turn 3 and our opponents threw another 4 VPs into their tally, we didn't do so bad in return making 3 back. 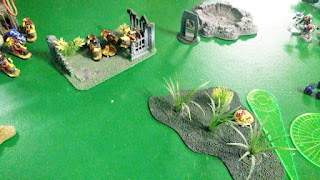 Sadly turn four saw us drop another 4 VPs and we failed to score again! The final score being 16 to 7 with Luke and Matt suffering only 371 Blood points to our own 1,300! Jeez we were poor. 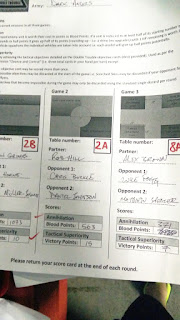 OK I admit the Battle Reports a bit weak on details but I honestly haven't got a clue what went on, it was just fun. 40k was just a reason to be in that space at that time with those people and all I get is a sense of camaraderie, laughs and giggles. I mean you saw that video Luke did of me after the game ended, I couldn't stop grinning AND I hadn't even won the raffle at that stage! Was it a 'good' game, it depends how you define good! Obviously we were slaughtered but I think it's a shining example of why I still play this hobby. And why 'win at all costs' [and the fact my gaming sobriety cured me of that nasty trait at least] should not be the be all and end all for enjoyment, certainly not when you're with such decent folk. In context I see these people no more than twice a year [with Dan I've met him once and that was 3 yeasr ago], but they comment on the blog and I read and comment on theirs and yet somehow it's turned 'virtual friendship' into friendship. For this I'm glad I play space toy soldiers and I'm unbelievably grateful for Alex for taking a gamble on organising such an event and the other attendees for giving it a shot too. Hopefully we can get another one next year, if you can make it I'll see you there!

Here's Luke's vlog to help fill in some of the blanks: