A quick Google search will bring up plenty of examples of Tyranid Warrior/Hive Guard Conversion. When a box of 3 warriors costs £25 and 1 Hive Guard is £15.50 straight from GW you can see why this conversion is appealing. Take into account you can get them cheaper from independent stockists and bitz suppliers for the components you need and you can make those Warriors deliver more than the basic 1 Hive Guard per box of 3 which is still a saving.

Thankfully my 'lucky dip' ebay bitz bag supplied me with nearly everything I needed to make two Hive Guard. Add in my existing stock of bitz and with a few more Warrior bodies and weapons I'm pretty sure I can field 4 Hive Guard for probably less than one brand new Finecast specimen. So first up you'll need a Monstrous Creature [Carnifex] Crushing Claw, left or right, doesn't matter. I know this doesn't come in your Warrior box but bitz places are selling these for around a pound each but if you have a Carnifex you probably didn't use these anyway. They look cool but their benefits [+1D3 attacks] aren't worth the price. 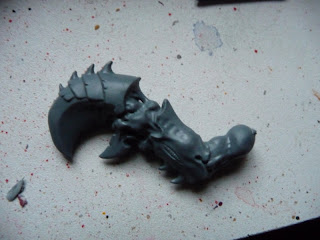 Cut the tip of the claw off. This is tough to do I use a lot of blu-tack to hold the claw steady as I do the cutting. You'll need the claw tip. 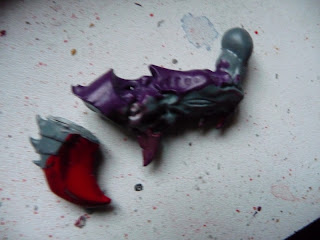 The arm bit is redundant but I'm sure they could be used elsewhere, perhaps as front limbs for Warrior/Tyrant Guard conversions? [now there's an idea...] 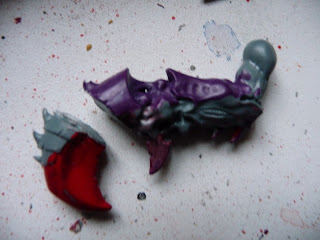 So with your claw tip remove the inside tapered section. Score across the ridge first then it's much easier to cut through tiny bits at a time with a scalpel than try and cut along the whole ridge. My scalpel had a snapped/squared off tip which was so much easier to cut with as the broken end gouged a bigger cut than the point would have. Again blu-tack is essential to keep this thing steady or you'll lose a finger. I also suggest some eye protection too, bits fly off occassionally. 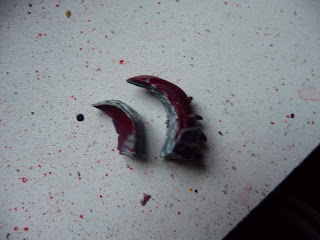 You then need to cut a channel in the base of the larger of the two pieces. This will mount on the warrior body. The inner piece is redundant but I'm sure it may be useful at some point. 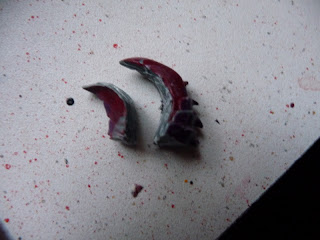 Mount the claw on the Warrior torso. For the inside of the claw I used some of 'Anita's 3D textured' paint to draw ridges on it to try and blend it into the shoulder socket. 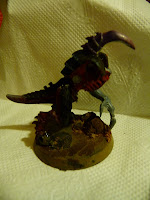 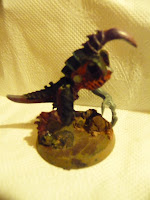 Here's the channelled join of the claw to the torso. I also trimmed the bottom ridge down a bit so the 'crest' wasn't as tall, something I forgot on the second model. This help to make the figure shorter than a standard Warrior. 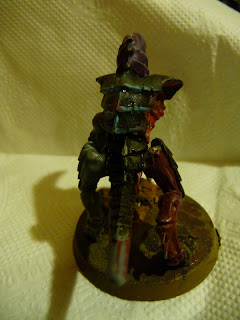 The lower torso had it's tailed snipped off and sanded smooth. It's position was more horizontal than the standard upright Warrior stance and the upper torso was tipped forward too. The head mount nob was removed and a rending claw was glued in in place. 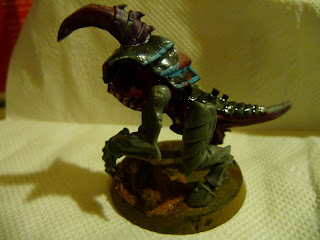 So far so good? If you've managed that the worst is over, I think. The impaler cannon is up next and some choices on the head, depending what's in your bitz box, hope you likes it.
Posted by 40kaddict at 12:11