That aim to produce a years worth of content has been a bit of a killer. I hoped to still have plenty of content to share with you but Dawn of War, the new kitchen and the slow progress on any Dark Angel material has brought the blog to a standstill pretty much, or it will do. I still want to keep up with blogging and my painting but a number of other projects really need priority, not least an update to my Kendo Club's website. What's frustrating is my desire to do 40k/hobby stuff  is still very much there, I just don't have the motivation to translate that desire to action... still here's an update on the Deathwing.

As you can see they all now have Ferron Crux Terminatus, although I think they need a Devlan Mud wash to bring out more contrast. 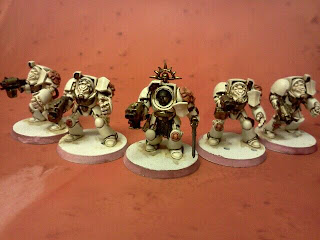 I've also added the bronze items, still need to do another highlight, then Devlan Mud and Badab Black to bring back the shadows and I'm going to do some Turquoise for a bit of verdigris patina which should age the weapons nicely, though I'm concerned it'll be a colour too far. Still to debate the use of Dark Angels green anywhere, it's questions like these that are delaying progress. 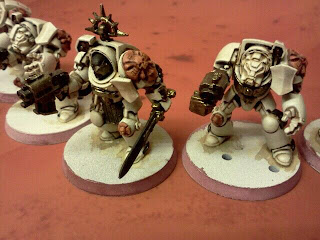 Eye lenses will be green, I think [?], but there's targetting lenses, all the odd rivets and bolts etc. the whole thing is just building into a chore to get even the smallest detail resolved. I'm happy with the Bonewhite but the battle damage will be another risk, which stalls that too. 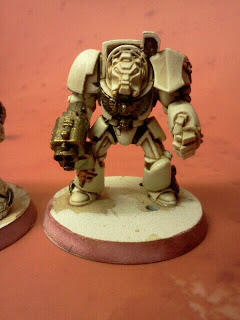 On top of this I worked out I could have scratchbuilt an assault cannon from my Ravenwing upgrade sprue, which would have been useful and so would a Cyclone Missile launcher, which I could also make from the upgrades, or try to use the launcher from my Drop Pod. 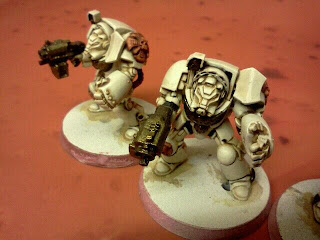 G.O.D. knows what I'm going to do for the Sergeants Power Sword. I really want to progress with these but I'm spending ages on them. They're by no means Golden Demon, but I'm taking more care on them than the nids and the slow decision making is hampering progress from the beginning. Which obviously slows down the blog. Anyway, progress is progress, we'll get there in the end. 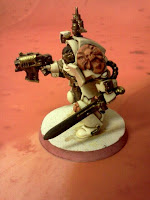 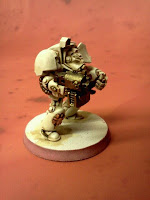 Apologies for the colours in the pics, night shots again in the garage. Hopefully I'll get some better ones at the next update.
Posted by 40kaddict at 12:55