Continuing on, here's the rest of the board, though I haven't a clue what was going on. I know my son suggested to the guy with the Necrons who had some power to take control of vehicles why didn't he target the Baneblade [which was actually a Tower of Skulls] which prompted a furious round of high-fives and cackles of glee as they hadn't thought of that! 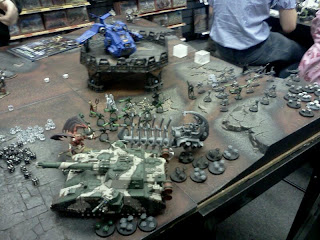 Another shot of the lay of the land, which I love the board colours, almost 'Ferron' ;) 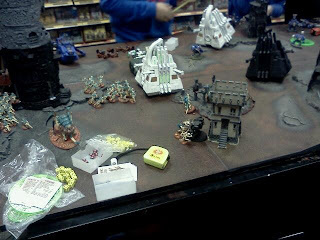 In their turn all the Hormogaunts were killed by an Orbital Bombardment thanks to Marneus Calgar half a board away. Only the Bonesword Prime left alive, with a Legion of the Damned  squad materialising in front of him to pick off the remaining gaunts. I think at this point the Tervigon had been killed as well, I think that's why the squad left the building to take it out and that Librarian did awful damage. Only 4 of the spawned Termagants died in the Psychic backlash from the death of their Brood Progenitor. Our next turn, the Mycetic Spore arrives with a plop, Devgaunts jump out ready to take on the now decamped Blood Angel squad. With 30 shots I think the managed to take down 1 or two, maybe the Fleshborers did something but 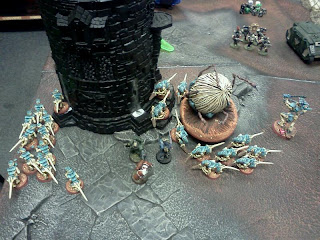 The Trygon Prime burst from the ground, his Containment Spines perhaps taking out a Space Marine. Meanwhile the Adrenal Stealers were killed off with the Broodlord the only one left. 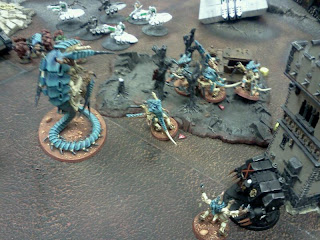 More Necrons sweep across the board. 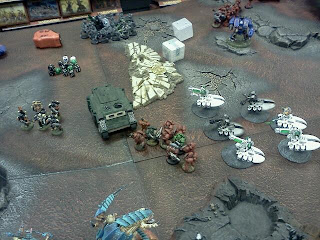