This bad mother hubbard ﻿is taking shape now. The second pair of scything talons have been glued in place. They're in the Codex picture and it makes a lot of sense to add them in a gaming purpose, re-roll misses - awesome. They really help sell the idea the Tervigon is using the extra limbs to support the weight of all those embryos. Alternatively the Tyranid Warrior rending claw arms might have been used. I would have put them in the middle limb sockets and had them gripping the birthing sacs.
The middle limbs were pva-ed onto rocks, so it looks like they're resting. It's a simple protection feature because those talons are easily broken as evidenced by the fixed left front talon. I used poly-glue but a straight break like that is never going to bond properly, the first attempt had already snapped. So I tried again but also added a masking tape support around it. It's not indestructible but it should survive with a bit of care. 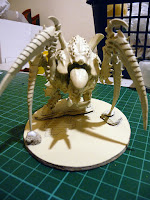 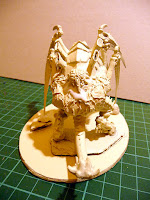 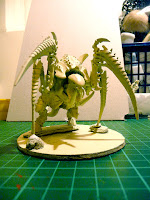 ﻿You'll also note the middle picture has had and adrenal gland added. It's inverted because it made sense that these biomorphs, when taken, are passed onto the Tervigons progeny. Attaching it to the join between the carapace and the birthing sac biologically works. What doesn't make sense is the rule that these biomorphs are passed onto ANY Termagants within 6". How does that happen? Anyway, a few more veins from the base of the glands and some PVA blend it all together. Actually you can see the PVA has just been applied. I think it's a great material but it's easy to get complacent, this was too much, the glue shrinks but it's not magic! 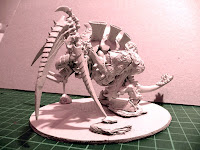 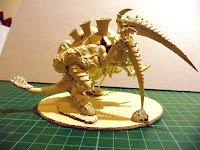 You can see here that the extra slate, and some volcanic lava stones are lifting the Tervigon up a bit. This would help with the pose of the birthing gribbly [you can see where he's going to be in the slightly cross hatched area].

Painting our Hive Fleet
So I haven't really given a step by step guide of how to paint our Hive Fleet, until now. As the modelling is finished all the future parts of the Tervigon tutorial are painting guides.

Usually I would undercoat the figures white and then all the pale bits start with a Bonewhite base coat. However this became a bit laborious so I got a satin 'Ice Cream' Plastikote spray paint for that. It was about £6 and doesn't have quite the coverage of a dedicated undercoat but it served a purpose of undercoat and basecoat in one. No more need for individually bonewhiting all the 'nids. A couple of sprays and the a whole lot of time was saved. I think the last picture illustrates my undercoat best. It's not quite as dark as Bonewhite but the future washes fix that and as far as I can tell the washes could probably do the same job without any basecoat.