As I've said so far my son has a sweat on for Eldar. This is to be his project, his painting, his decisions. I'm not supposed to be helping him but ideally I'd like for him to be able to achieve something half decent despite his inexperience, hence my advice for base colours and washes for instant results.

He did suggest he wanted his Craftworld to be black, but I was under the impression that it's notoriously difficult to paint, line highlighting isn't going to be his strong point until he gets better 'fine motor skills' with a paint brush. So I dissuaded him on this course but am I wrong [to interfere, of course] but I mean about how easy it is to paint?

Looking at the GW Craftworld gallery there are two that he may consider, Iyanden and Nacretineï. If he goes Iyanden I may even get an Army Painter Daemonic Yellow Primer to help him along. I'm also going to pop into the Manchester GW next week, they have an awesome Eldar army with a Pastel/Metallic paint-scheme similar to the Nacretineï. I'm hoping to get some pics [which I'll post here]. I think they're just basecoated, washed and a few highlights

Anyway, I'm looking for advice from anyone about how to paint the Guardians, any cool links to simple techniques. I found this tutorial on Painting Clinic it's really cool, but too advanced for my son. I stumbled on some cool Tyranid websites when we started on the 'nid army but Eldar seem to be evading me, trapped in the Webways no doubt.

Cheers for any help, have a Happy New Year! 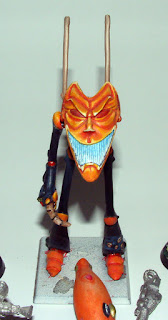