Afternoon #warmongers and I'm continuing #paintingwarhammer #bloodbowl Ogre. After a matt black prime and red oxide zenithal highlight I had some pretty decent coverage. Given the cold weather I did the full 2 minutes of shaking both spray cans and even kept them warm [by holding them in front of the tumble dryer vent as I shook them]. I then quartered the uniform with Valejo Game Color Stonewall Grey. It amazes me that I've used this paint as a base for almost every white I've ever done and teeth too. It's spurted out of the dropper bottle numerous times but still feels like there's half a bottle left, and after a decade too! 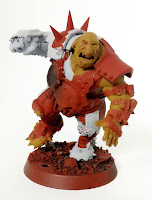 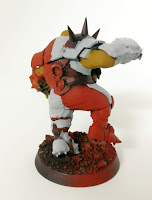 I'm still a little undecided on some elements. I had envisaged a roughly painted belly plate in team colours but it might be silver or bronze... Army Painter Strong Tone washes over everything - I have noticed a glossy finish to this batch, maybe it's because I can never be bothered to shake the bottles. I also think I should be thinning them a bit more. They work much better with water to break down the surface tension and bleed into the crevices more.

A couple of nights on and I've done all the first Stonewall Grey highlights and all the Valejo Game Color Heavy Red [or Khorne Red] highlights. I then did Vermilion art acrylics for the next red highlights.

Now I think the other Marauders were done with VGC Bloody Red but I wanted to play around and I felt this colour might give me some more interesting results and I think it was justified in the end.

It's such an odd paint, very thick but has quite an opaqueness when watered down, but that can easily become a glaze depending how you work the paint with the brush. But then a quick stipple and you get the signature hammered texture finish. 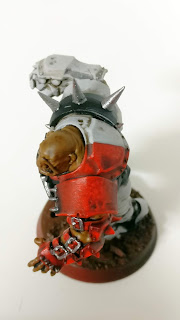 White highlights next and I may even add in some additional edge highlighting on the red, not to make it 'pop' you understand, but to add definition ;)
Posted by 40kaddict at 12:19