Progress has continued on the Middenheim Marauders, all the red and white has been highlighted which felt like quite a substantial milestone, almost like the models were complete. Unfortunately that's far from true. Skintones were next and I had mixed results on my star thrower Saul Tigh. 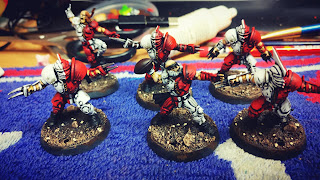 The Catcher was a bit better but I'm still a little undecided [and he needs a name]. 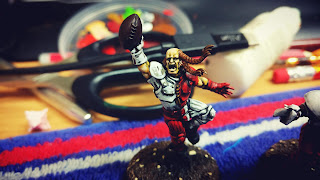 I'd originally wanted this guy to have a black Mohican but after the recent rugby world cup this will be Joe Mauler with blonde hair and dark beard. 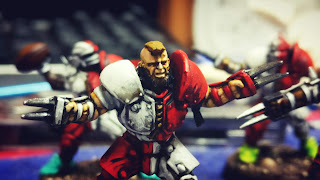 I also gave hims some fancy-dancy running shoes. A number of random players will get the cool trainers. Two have the turquoise, two have dayglo yellow/green [on the right] and two have quartered, like the rest of their uniform [on the left]. 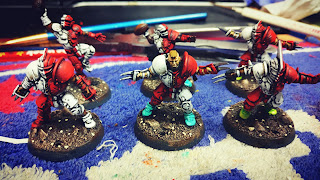 There was something about doing this I was desperate to do - like football player have these shocking coloured boots that are incongruous with the team colours Initially the one thin coat I applied made me feel I was completely wrong, it was like look at my stupid colour choices from the 80's/90's. But after shading and highlights they looked OK. 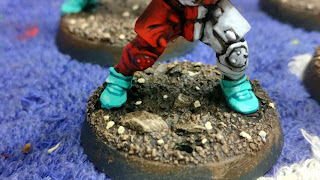 The dayglo ones in particular capture that bizarre colours you see on the sporting field but they also dredge up a lot of nostalgia for me as Blood Bowl and the way I painted the figures back then for my first game seem to have been brought full circle. The remaining 6 boots are all standard black. 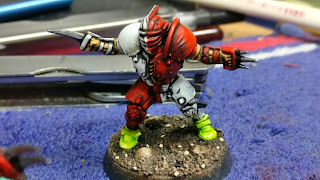 I then decided that I was going to freehand the Marauders team badge. Starting with a white diamond I though I could eyeball the two pairs of parallel lines but quickly adopted four dots as a starting point, then two parallels.

The second pair of parallels completed the diamond and I filled them in with Stone wall grey. I'd also applied team number decals on the back plate and shoulder pad, but the black numbers really don't show up too well.

Just in case you didn't know, this is the team badge - so cutlasses next and I will be doing it old skool blue and yellow, not the gold and silver you see painted on some of the original old models.

The diamond on each shoulder. 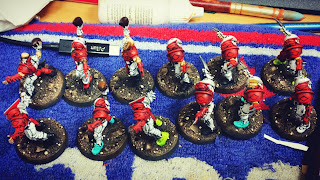 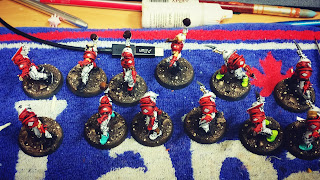 Getting those cutlasses on each diamond without it looking ludicrous is the next challenge. 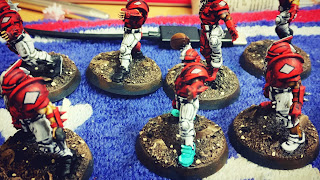 And the rather underwhelming but serviceable team numbers... 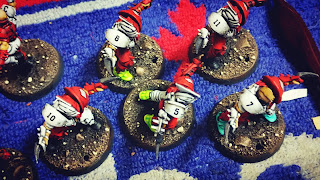 Still so much to do momentum is a little lacking as it feel quite over whelming. Despite the significant extra work in freehanding the 12 badges I actually thought it would be motivating, which in some ways it is. I'm looking forward to doing the badges much more than the remaining 6 pairs of boots, towels, ribbons and balls that still need painting. Definitely going to do some nid basecoats after this!
Posted by 40kaddict at 12:41