Building models alwaysfeels like a day job to me but most of my hobby time is at night. I'd got to the point where I needed to do his pose and that had to be the obligatory 'standing on something' that is all the rage. Of course that becomes fiddly, cutting plastic pegs off to allow joints to rotate, trying to old poses in place while poly-cement and super-glue dry, but somehow I managed it. 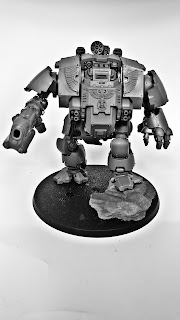 I have to admit I do like this dreadnought. When it was first revealed I wasn't fussed but having one it seemed churlish not to build it and it's deceptively bulky too. I was easilt convinced it was bigger than my Warglaives, but it's shorter - clearly the extra bulk adds a few inches in height.

To that end I may call him Brother Jacamo. His main weapon is just push fit but the others are glued in - 8 Storm Bolter shots seems the better fit than the Fragstorm

My only issue is the ball of the waist joint is almost out of the socket. Not sure if I need to disguise this somehow, possibly greenstuff ribbed tubing, as if it's a flexible joint, not a ball-joint. 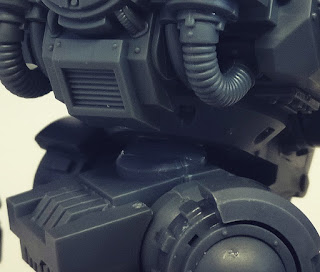 But my previous suggestion of putting the Ravenwing Relic [rope things] on his back might distract the eye from this and I removed two of the rivets where it was to attach. 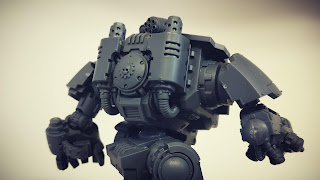 And it would fit thusly. 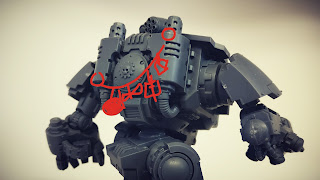 Or more accuratley, unfortunately I've only gone and lost that piece, Now theres one on ebay for £3, all the bits sites are out of stock or a full Ravenwing upgrade sprue is £9 direct from GW... I really don't need to make a decision just yet, perhaps I'll find it. 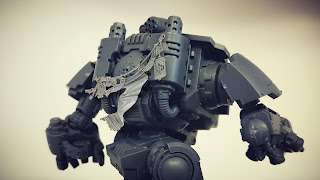 The plan is to base and undercoat this and then leave it for Dreadtober. I know you're supposed to build and paint throughout the month but it's still a stretch for me just to paint the darn thing so a headstart will give me the best chance of completing it. My Imperial Knights were last years effort, with my hope to finish building them both but due to Oscar's illness I couldn't face the hobby for a good couple of weeks, which is what it took in November to get them 'built'.  Still this is TO DONE!