With the Armigers out of thesurprisingly it was the future containers that drew my attention. The orange ones requiring four coats of paint to achieve the orange I was after and that's not including all the priming, shading etc. Strong Tone picked out all the shadows and then my pumpkin craft acrylic edge highlights. 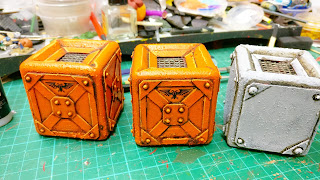 Then I noticed that some Aquila decals would fit perfectly in the top space so they both had gloss coats, decals and then matt varnish [can't find my Lahmian Medium :( ], two side on both. 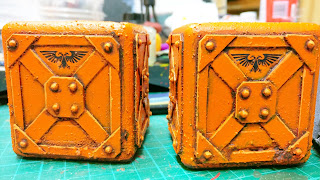 I've shipping company logos to add yet and then some more weathering and damage, probably not as much as the OOCL ones but we'll see. 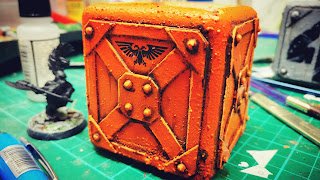 The third container - I decided on grey. 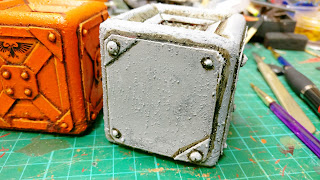 Once again BIG numbers look awesome, painted some scuffs too. 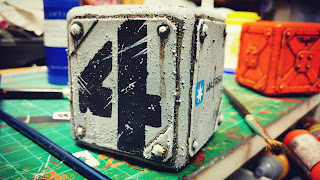 Maersk Line shipping company, I did consider switching it for Magnus but decided to leave it as is. 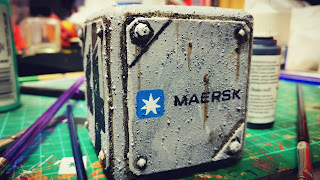 The other big number. A simple stencil, tidied up and then scuffed. 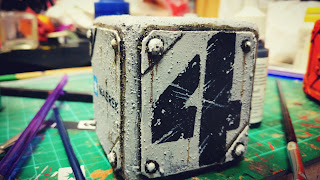 The Maersk logo - a stencil with grey dots for the centre of the A, R and nicks in the S. The blue square was stencilled, then the white star stencilled and tidied up afterwards. Again still more weathering to do, as I say I got carried away with the amount of sand in the basecoats, it's a bit too rough but there's not much I can do with it now. 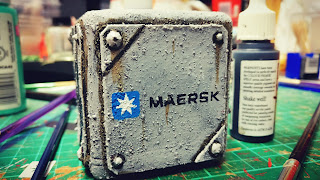 I then went and did the Hapag-Lloyd logos. Obviously with less success - stenciling the name was really difficult. Given the spacing between the letters I only really cut out the H, p, g, L, l y, and d and then hand painted the a, a, - and o. 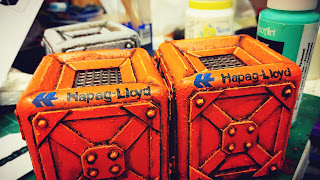 Then I went back and filled in all the 'counters' [the holes in all the letters, like the o and d]. I tidied it all up, added some shading'highlights to the blue logo and although it's not perfect it'll do. Some weathering will help but I do need some additional decoration on the sides. 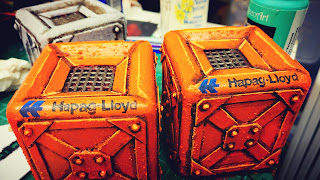 These last two pics were originally going to form the start of the next post update but I've since realised these will have to go on hiatus while I focus on the Bio-titan, so thought I'd share them now. And one day I still need to create an STC for a foamcore cube to replace the OOP Mentos cubes that form the base for these, one day...
Posted by 40kaddict at 12:08