Bless me readers for I have sinned, it's been nearly 3 months since my last confession.

For the most part you all knew what was on it anyway. I pushed on through the Genestealer Cult and felt like I was casually getting into the Deathwatch, however that's now become something of an urgent task. 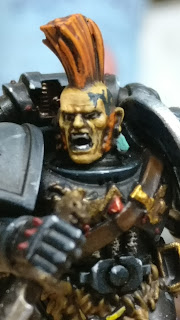 My To Do List has down my Armies on Parade board. This is nothing grand, just a new red planet 2'x2' that has an area that has been tiled with large pre-cast concrete slabs. I have some sheets of MDF that have nice pre-painted tiles on. They came from my Great-Aunt's house when it was sold and I thought one would make an interesting base for the tile. But Armies on Parade begins on the 23rd October, which means it's just 4 weeks away. In this time I need the Deathwatch done, which is doable. I expect them to be complete in a week or two [although I have my doubts about the White Scar biker Jetek Suberei, but no loss if he doesn't make it]. 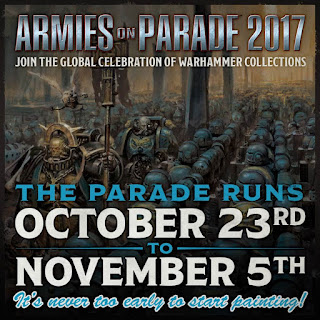 But something that would make the theme of my Cultists attacking the Deathwatch defending a small storage compound so much better - these two. Now getting the board, Deathwatch and Sentinels completed in 4 weeks is nigh impossible, for me that is. I might make two but three is a stretch. 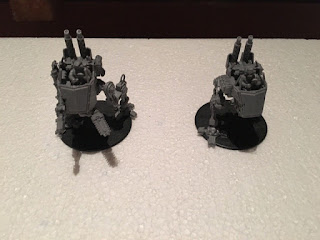 So the priority will be Deathwatch and Sentinels. I can try and print a new backdrop, as that won't impact my hobby time at home and potentially one of my existing flat Realm of Battle boards will suffice if there is no time to create a new one. Obviously that will mean I flatly abandoned my To Do List goal, but if the Sentinels get done that will more than make up for it. But with just 28 days until AoP time management is key and by the looks of it I have quite the challenge given the speed I paint.

In a future post I might be looking at AoP a bit in more detail as new information is on their website for this years Parade. In particular the new categories are of interest:
Not entirely sure where mine fits in, possibly best theme, but it seems clear that although there are now plenty of opportunities to win its clear you can now only win, no second and third place awards. Everbody gets an entry pin which is great because I think it's taking part that is key, I'm just disappointed that it looks like there'll be no bronze medals anymore and I so wanted one to complete my set...
Anyway, we'll look again nearer the time.
Posted by 40kaddict at 12:07