One of the reasons why the drop pod was put to one side involved the doors. The standard is usually to put yellow and black chevrons done the side/inside and although I love a good chevron [yellow and black in particular] this was never what I wanted. Orange was my plan but having put the orange down the side I panicked and tried it inside as well. When I say panicked I mean I had a thought to photograph it and then Photoshop the extra orange on the inside and ask everyone's opinion but when I cam to do a successive coat of orange I just started painting the inside regardless [covering up the blended green I'd painstakingly done already]. 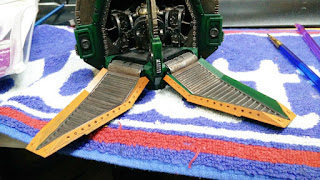 But you see this was the inspiration for the orange [although they also did it in BR Green and yellow] so in some respects the original plan of just the side of the door was the right one. 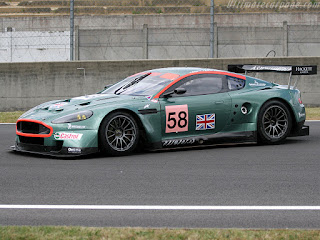 So with the Aberrants out of the way and the Primus and Magus running out of steam it was time to look back at the pods. First step was to take a slightly different Craft Acrylic orange and run it along the bottom of the strip. I thought this would make it shade from bottom to top as my Valejo Fiery Orange was going to be on the edge. Then I carefully filled in all the 150 holes that are for the explosive bolts holding the doors shut. 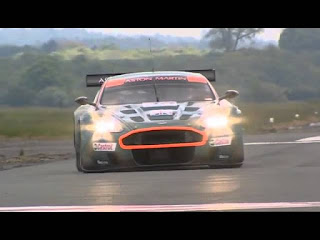 But the intention was always to show the scorch residue from the bolts and the subsequent 'splotches' just didn't sit right and I was contemplating repainting the orange again [which had taken about 4 coats to get this far] and redoing the holes neatly. 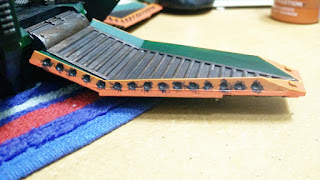 I have a rule that if something doesn't look right then it usually isn't and as much as I wanted to show scorching what I had created was just 'untidy', like I'd tried to be neat but failed abysmally. You can also see the 'darker' orange didn't look darker, but more a hue shift so I was becoming frustrated and very early in the process of trying to finish this for good. 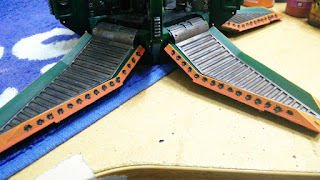 One last hope was to apply some silve to the edges, just to try and convince the viewer the scorch was intentional. Realism potentially out of the window, how do you get exposed metal and soot damage at the same time [you probably can but it didn't seem right in my head]? 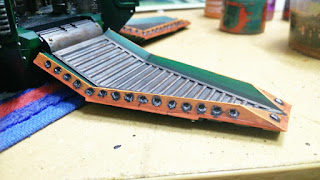 But the result was pretty OK and I thought it was good enough to save me from resetting the edges, both bad for progress and morale. 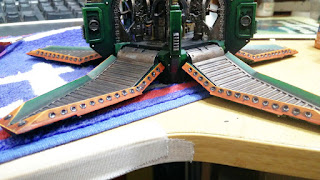 I also added some washes to the edge, not as apparent in the pics as it's ended up. Sepia all over and some Nuln Oil on all the holes to try and blend that 'soot'. Grunging it up saved it completely and you'll see how good it's become, blending the two orange hues together. 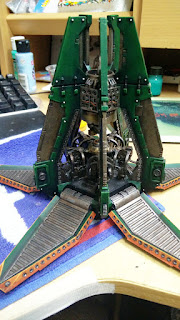 So I'm now really pleased with the result, it may not be the crisp clean orange of the Aston but the end result is something so much more and much mor ein keeping with what I've done in the army already. With this hurdle over it was full steam ahead and it looks like it's almost the home straight.
Posted by 40kaddict at 12:06