"It's just one of those things son" a year on. 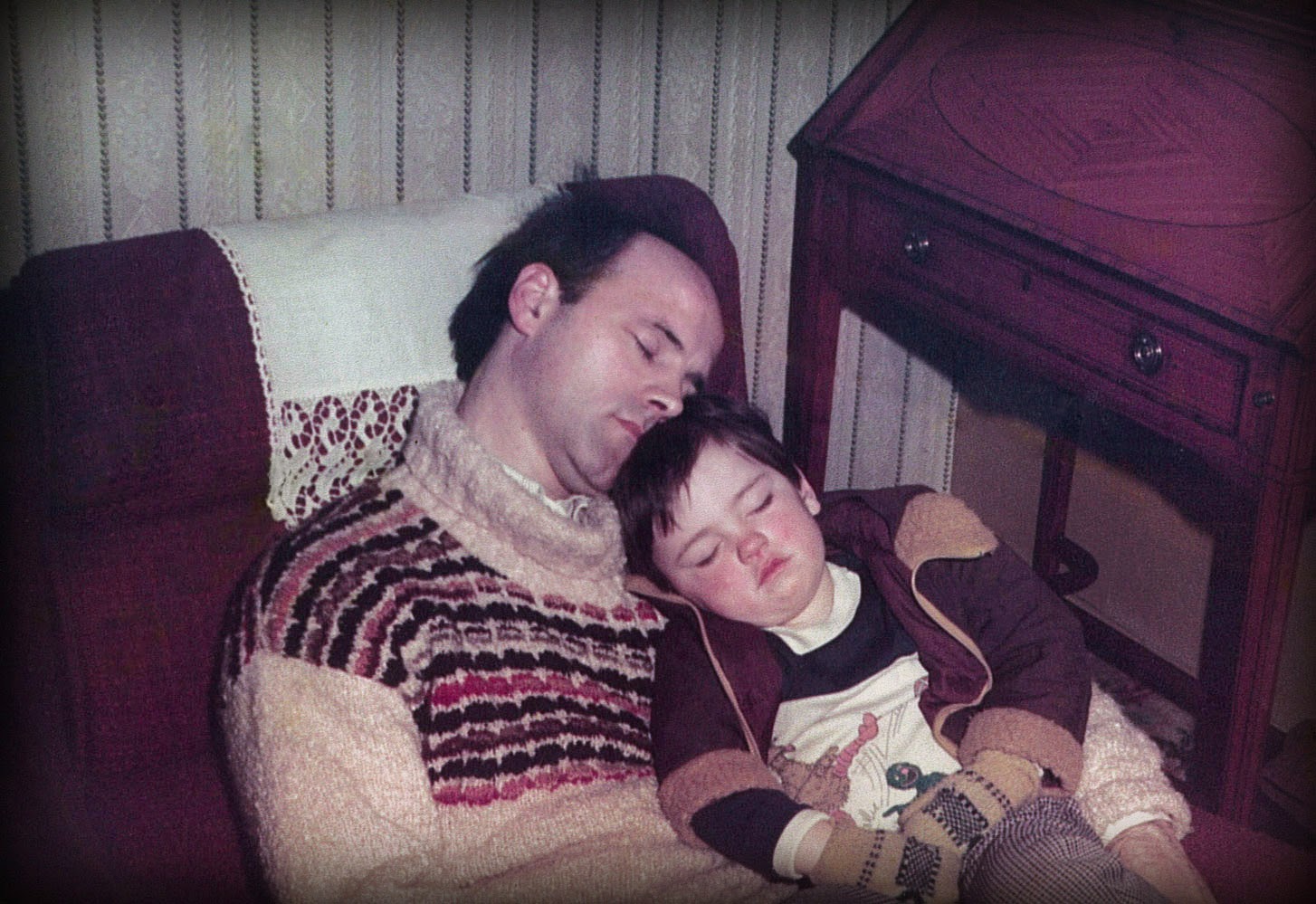 No doubt some reading the blog may have only started after February last year. As such they may not know my Dad was knocked down and killed on my birthday 2013. Once again this will be a personal post and not 40k related so if you're not into autobiographical parts of the blog I'd recommend, and understand, should you choose to stop reading this post

It's a year on now and thankfully the court case has finished and the person responsible was found guilty. I won't go into details about the sentencing, the law is a funny thing when it comes down to car accidents, quite often the victims don't really feature in the final tally, it's more to do with your driving ability and lack thereof at the time. Having caused an accident myself where the motorcyclist could have died, but thankfully didn't, I know how the system goes and I appreciate the need for understanding when a momentary lack of concentration or some other inexplicable decision can have tragic results. Unfortunately there is no Undo [Ctrl+Z] in life, much that I wish there was.

Anyway, moving on we've come to terms with our loss, 2013 was pretty crappy all round really so I'd like to recall at least one happy memory I shared with my Dad - probably the only time we ever got drunk together, sad though that seems to admit now. Rest assured there is no real story here, it's just me reminiscing, there's no punchline and it'll ramble on but I wanted to get it down.

For those that don't know [probably most of you] I went to art school [college/university] in Falmouth, Cornwall. It's about 350 miles from where I lived, pretty much the furthest I could possibly get from my home without leaving the country [although some people claim Cornwall is another country, those people are called Cornish people ;)], this was purely intentional. I desperately wanted to 'fly the nest' and did not want a back up plan should I feel homesick. By making sure I was 10 hours away by coach there was no chance I could scurry home with my tail between my legs [and it's such a nice tail too!]. But this distance was problematic a few times a year when I needed to get to or come home from university and the coach really didn't cut it to take all my stuff. For those times I needed my Dad, or once my brother made the journey instead.

This particular time my Dad came to collect me my Mum was supposed to come too. Unfortunately I think she had sciatica - back pain so severe she had to stay in bed with my brother to watch over her. Meanwhile my Dad set off to pick me up and I'd booked him into a B&B about a mile from the town centre on the outskirts. Falmouth is one of those typical harbour towns rows of houses seem to spread back onto a hill and then back down the other side so if you want to get out of town you have quite a climb to get up and then down, I never imagined I'd be escorting my 'slightly worse for wear' father along this route.

Anyway, my Dad arrived in the afternoon and we spent it with the family I was living with and then in the evening went down to the town to get something to eat. We went to the Quayside Inn, which as the name suggests was on the quay side and there are plenty of benches outside, in fact it looks exactly like the following picture [this was the day we handed in all our course work, probably a year after my Dad and I went for a pint]: 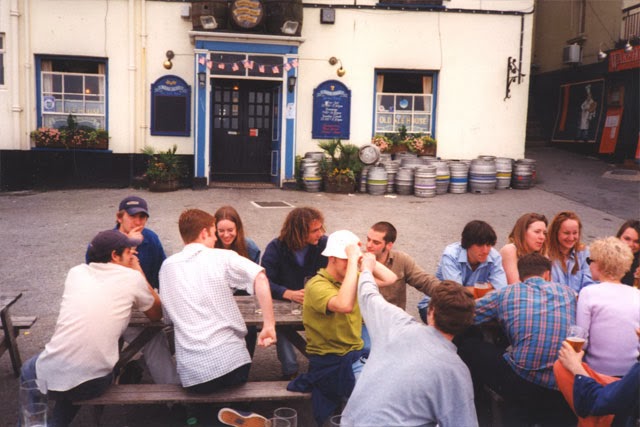 My Dad and I sat outside, it was a glorious summer evening and we drank and probably had a 'cheese hand' - a flat oval loaf of bread about 12" by 4" and unsurprisingly covered by cheese and it's all toasted, yum. So we drank and ate and as it was just the two of us on the bench other people asked to sit alongside us. I've no idea who the group was but I was under the impression these middle aged people were lecturers at the art college, although none that I recognised. They proceeded to discuss art and the merits of modern art and eventually fuelled by the local brew my Dad started to enter into the debate they were having. He boisterously started to decry 'modern art' his Liverpool heritage and practical engineering background making him unable to accept any art other than, well y'know - a 'nice picture'! I was both mortified and amused to see him delivering the 'joe public' view of art to these people who were just too cultured to offer an argument to convince him otherwise.

It reminded me of when I was choosing my A-levels and wanted to take Design and when my Dad questioned the Design teacher about it he said 'can he make any money doing this?' to which my Teacher said 'why yes, he can make around X thousand pounds a year' to which my Dad then questioned his whole life by saying 'well if that's the case why aren't you doing that for a job instead of being a teacher!' My Dad wasn't thoroughly 'Northern' and outspoken but he had a couple of moments like this that stick out which is why I cling to them in equal embarrassment and fondness.

Anyway, with the conversation reaching a stalemate I forget whether we left or the lecturers decided there was no argument that could overcome Northern common sense and made their escape. Eventually it was time to take him the mile back to his B&B, but the journey home with an inebriated person who has rediscovered the Scouser within was fraught with more embarrassment, not least when he struck up a conversation with a couple of Cornish glaziers who were replacing a smashed shop window around 11 or 12. I'm not sure they had a clue what was going on when this bloke, who was clearly not local, just started to chat with them in the middle fixing the pane in place.

I eventually got him to the B&B, and then had to travel half a mile back into town to where I was staying. Of course I could have left him to find his own way and got home earlier but I could see he was in no fit state to navigate by himself and I wanted to ensure he got in safely. So I was quite surprised when I finally got in and found my Landlord or Landlady still up and waiting for me. It turns out that my Dad had not rung home to tell my Mum or brother that he'd arrived safely. To cap it all my Mum's Sciatica had got even worse over the course of the day and my brother was in bits about what to do and had rung my landlady to speak to us but we'd been out all evening having a right old time!

I never quite found out how much trouble he got into for that little escapade, I think I recall a sheepish phone call the next day and us probably spending that 350 mile journey back trying to come up with a series of believable excuses as to why, at the least, he'd not made the courtesy call to say he was safe and why we'd been out boozing when my Mum was ill. To be honest though I'm glad we did, whatever the price. We didn't spend  much time like this, just the two of us and certainly never in the capacity of father and son going for a pint. It's a cherished memory for me, the nuances lost to anyone else but one I have always held dear. Thanks for your indulgence, yet again.