What? You really didn't think I was making the Capillary Towers as just terrain pieces did you? What's really surprised me is no one asked about the slots that have been cut into the towers from day one. I was sure if I'd released the towers templates folk would figure out what was going on and I thought even holding out would be conspicuous by it's absence. 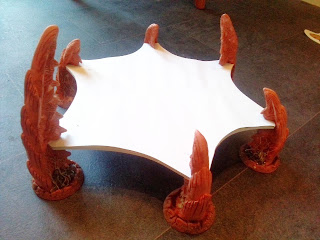 Originally I planned to not cut slots, but embed magnets and have an additional central column that would support it underneath. But the slots would solve the problem completely even if they looked a little odd when used just as terrain, I may make some wedges for those instances. There was also going to be a swappable sphincter in the centre - open and closed to represent the landing pad sending bio-matter back into space and in doing so offering the Invulnerable Save. I thought better of that as swapping out the sphincter with models on it would be a pain in the a$$ 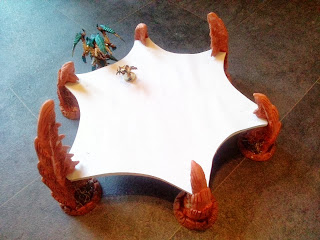 As you can see it's quite tall but a handy height for Trygons. I will look at adding removable walls. I'm planning to make a frame and then stretch molten transparent plastic cutlery between the frame so you can see through it. I'll add magnets in the base and walls so they easily attach and stay in place. 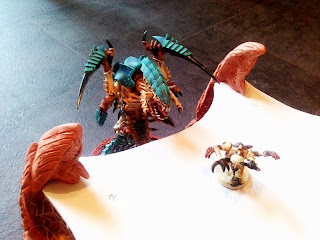 The landing pad is a bit of a blank canvas though, I know what I want to do, just can't bring myself to do it. Still I only foresee a couple of nights work on the pad but you see how these projects just keeping getting bigger. 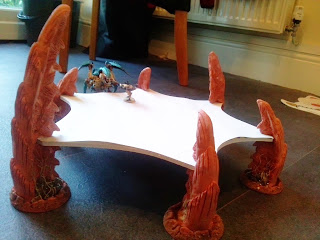 And in case you were wondering how it stacks up against the standard Imperial Skyshield you will note there is significantly less surface area. I may be stretching the capacity of the Imperial one, two bases do fall outside the edges but it's wall flip down. The Tyranid version will have ones that are added to the pad, which will in turn contract the available surface area. Granted I also have some impressive LoS blocking terrain in the Capillary Towers but four out of six are no bigger than the walls on the Imperial version.

Additionally my walls will hopefully be semi transparent which is a big point because on the Imperial version with them raised attacking models would struggle to see the defenders. If you cannot see them you cannot assault them. I will probably be surrendering a large advantage to make them look cool, we'll see if I can pull it off.

One other point, what if I create a smaller platform? Something that would be happy supported just by three towers, then I have two mini platforms... I'm a freakin' genius! Unless of course yesterday's rumour that we won't have access to Fortifications prove true, in which case I've wasted a whole lot of time making stuff I can't use, in which case I'm a freakin' idiot...